With the limitations of many media players and ever-falling prices of ever more powerful PC components, building a Home Theatre PC (HTPC) as the centre of your entertainment setup is a mighty tempting proposition. A core part of this setup will be a TV Tuner card, and we’re looking at a likely candidate today: Asus’ lengthily-named My Cinema ES2-750 PT/FM/AV/RC Hybrid TV Card. 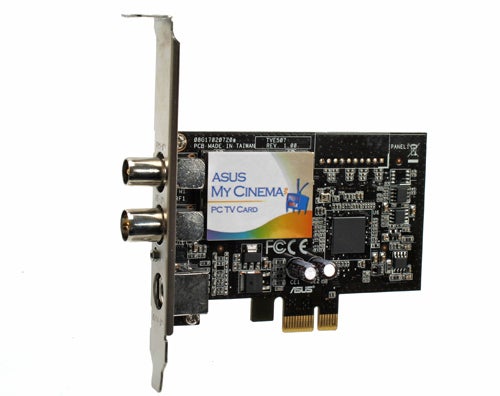 Asus is by no means a stranger to the TV tuner game and its My Cinema range has been around for a long while, so we’re hoping for good things. This card isn’t high-end though. Unlike the dual-DVB-T Compro VideoMate E900F we reviewed a while back, the ES2-750 only has a single TV aerial input, through which you can choose to accept digital (ATSC, DVB-T, and Clear QAM) or analogue terrestrial (PAL, SECAM, and NTSC) television, though obviously the former is the preferred option.


At the card’s heart beats an AMD/ATI Theater HD750 chip, which while not featuring unusually advanced video processing does bring with it a few advantages – especially if you have an AMD/ATI Radeon HD graphics card, which it can use for transcoding. The HD750 offers all the usual enhancements such as an intelligent 2D/3D comb filter, de-interlacing and noise reduction. A highlight here is 12-bit ADC rather than the usual 8-bit one, but this is only relevant if you do still watch analogue TV. 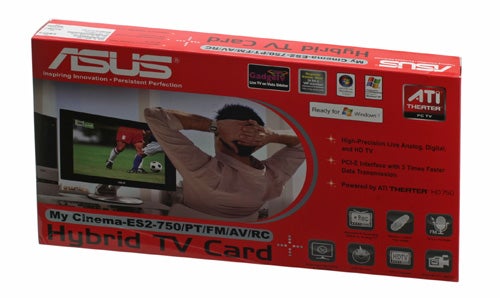 In addition to its TV tuner functionality the ES2-750 offers FM radio, and also allows you to connect external AV sources through it to your PC. The only downside is that there’s no component input, just S-Video and composite, so HD is out of the question. To be fair this is a problem with many of these devices, but some tuners like the aforementioned Compro E900F do offer component.


Asus’ included bundle is certainly adequate though. Aside from the card itself, which sports a full-height bracket by default, there’s a half-height bracket, AV input cable (composite or S-Video to 8-pin DIN), IR extension cable, TV and Radio aerials and finally a remote control. 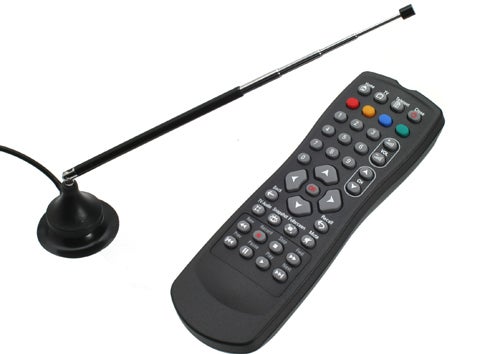 To be honest the remote isn’t anything special. Ergonomically, the relatively heavy remote is just a bit too large for comfort, though it does make a very solid impression and is finished in durable textured matte black. Some of the edges when inserting the AA batteries are sharp enough to cut. Meanwhile the buttons are on the small side and though logical, their layout isn’t particularly clever either. However, you’ll likely get used to any quirks and at least the remote is very responsive with excellent range (we tested up to 20 metres).

Getting back to the ES2-750 card, at less than 10cm long and a mere 5.5cm high it’s tiny and will fit in almost any case. It’s PCI-Express though, so won’t work in old motherboards that only have PCI expansion slots. 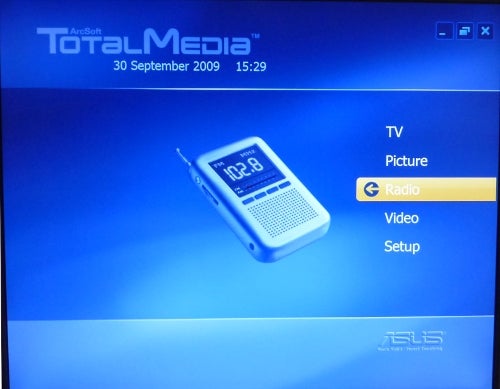 Installation is very simple, and is covered in about 30 languages in the included manual (though it doesn’t cover anything else). Thanks to the ES2-750’s use of an ATI tuner chip, you shouldn’t need to install the included driver if you have an ATI graphics card with driver version 8.61 or later, as this will run the tuner just fine. Either way though, you’ll still want to insert the included CD to install ArcSoft’s excellent TotalMedia software


Though you can of course install applications individually, if you just click the button labelled ‘Smart installation wizard’ everything will be automatically set up, culminating in a channel scan for the TV tuner (the FM radio channels have to be set to scan manually). All of the software is compatible with Windows XP and Vista, and should work with Windows 7. 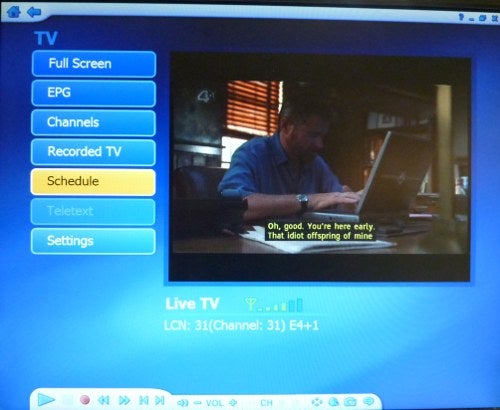 Unfortunately we couldn’t get Asus’ GadgeTV applet (that lets you easily watch or record TV from Vista’s sidebar) to work on our test system, but it’s no big deal as ArcSoft’s TotalMedia is incredibly intuitive and easy to use, with a visually pleasing interface. At the main menu you can choose between TV, Picture, Radio, Video and Setup, all of which are easy to navigate with either the mouse, keyboard, or remote. Naturally you can pause (TimeShift) and record live TV, and since your PC takes care of the processing the quality of the image processing will be on a level with specialised AV systems.


When recording/transcoding, the ES2-750 can cope with an unusual amount of formats including MPEG2/4, WMV, AVI, DivX and even H.264, which nicely covers practically all the options you might want. Of course the lack of dual digital tuners does mean that you can’t watch one digital channel while recording another, though you can do so with digital and analogue.

If you’re one of those few who isn’t bothered by the lack of dual digital, then for £43 Asus’ ES2-750 is worth considering. It’s a compact card that works well, remains cool in use and comes with excellent software – which can’t be said for the likes of Compro’s VideoMate E900F. However, most users will want dual digital tuners, especially for an HTPC, so there are many better (albeit more expensive) alternatives on this front. Combined with the average remote and lack of component input, we’d therefore hesitate to recommend the ES2-750.


A tiny little card with good performance and excellent software, Asus’ My Cinema ES2-750 PT/FM/AV/RC Hybrid TV Card is let down by its lack of a second digital tuner.