The Nvidia GeForce 8300 chipset that lies at the heart of this M3N78 Pro motherboard has given Asus a very long list of options and choices. The chipset packs an integrated graphics core that also carries the GeForce 8300 name however its specification of 16 Unified Shaders that run at 500MHz is very similar to the GeForce 8400 GS core in the Nvidia GeForce 780a SLI chipset. Sometimes we wonder whether Nvidia makes up these model codes just to cause confusion.


To add to our woes the integrated graphics core used to be known as an IGP and then more recently it was called the mGPU but on this motherboard it is the iGPU. No matter what you call it the GeForce 8300 supports PCI Express 2.0 graphics, three PCI Express x1 slots for expansion (although Asus has only installed two) and all the AMD Phenom goodness that you could wish for. 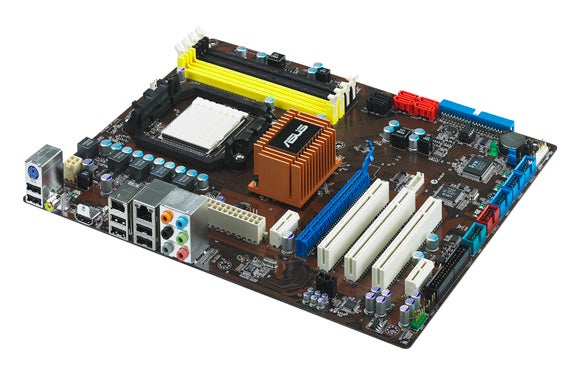 Support for Phenom may seem like a done deal provided your new motherboard has an AM2+ processor socket but the new Phenom X4 9950 has put the cat among the pigeons with its hefty power requirements. It’s not essential to select a high end Phenom chipset such as AMD 790FX to support your new Phenom but you do need to check the CPU compatibility list of the motherboard that you are considering. In the case of the M3N78 Pro Asus has got things covered with a sticker that boasts ‘140W CPU Support’.


Getting back to the GeForce 8300 iGPU we have support for HDMI, DVI and VGA outputs as well as Nvidia PureVideo HD video decoding technology so you would expect to have the minimum of trouble hooking up your M3N78 Pro to any display or TV that you may choose. In the real world things are slightly more complicated as Asus has only provided an HDMI port on the I/O panel. There’s an HDMI-to-DVI adapter in the package so you can convert the HDMI port but you cannot run HDMI simultaneously with DVI.


That’s the digital connection taken care of but what about analogue? There’s a VGA bracket in the box that plugs into a connector that is between the first and second PCI slots as you’ll see in the photo we have taken. Naturally you won’t be using this VGA bracket if you have a PCI Express graphics card installed so the routing of the VGA cable isn’t as tortuous as it may at first seem.

Asus has made a number of odd decisions when it comes to the location of the components on the M3N78 Pro. The main power connector has been placed behind the audio connections on the I/O panel so you have to feed the power supply cable past the CPU cooler and the Northbridge cooler.


In fact, the Northbridge cooler itself is also a concern as it’s only passively cooled and not especially big and is only secured with two plastic pop pins. During testing the Northbridge cooler got terribly hot until we used a case fan to keep it cool. In fairness to Asus and Nvidia we didn’t have any stability problems as a result of the heat but it seemed rather unnecessary and it is worth noting that we were using a low power 2.0GHz Phenom 9350e processor. The idea of trapping the M3N78 Pro inside your case with a hefty Phenom X4 without active cooling on the chipset strikes us as crazy.

Other quirks are the location of the CD-In connector which will be blocked by a double slot graphics card and then we have the SATA connectors. Also, the GeForce 8300 chipset supports six SATA connectors with RAID, however if you use the SATA connectors in IDE mode i.e. without RAID you are obliged to connect your drives to SATA ports 1-4. Ports 5 and 6 are located next to the memory slots where they have plenty of space but ports 1 and 3 are smack bang in line with the PCI Express graphics slot where they will be blocked by even a modest graphics card such as a GeForce 8800GT. This is especially strange as Asus has laid down the IDE connector to feed the cable away from the expansion cards yet that connector is in line with the PCI slots and is unlikely to cause any trouble.


According to Asus the M3N78 Pro has native support for 1,066MHz memory instead of the usual situation where memory runs at a JEDEC 800MHz until you raise the RAM voltage and manually adjust the speed up to 1,066MHz. The manual for the motherboard lists six pages of memory that will run at specified speeds depending on which AM2 or AM2+ processor you are using. This is because the memory controller is inside the AMD processor rather than the chipset. 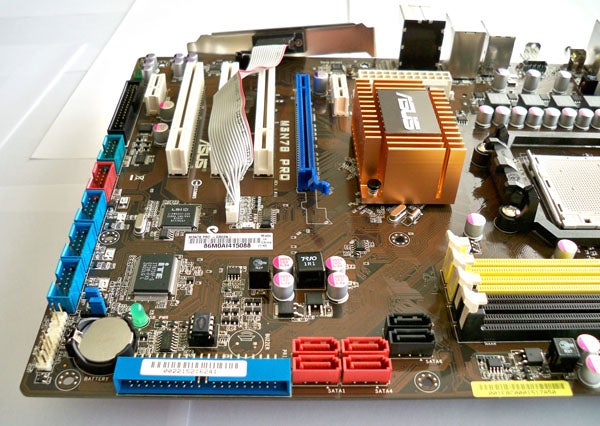 The list of memory that runs natively at 1,066MHz consists of one model from Qimonda, two from G.Skill and one from Corsair which unfortunately wasn’t our preferred Corsair Dominator XMS2 PC-9136. When we disabled Cool ‘n Quiet and raised the memory speed the system refused to start Windows so we went for the easy option and left all the settings at default. This wasn’t very satisfactory but it probably reflects the way that most people would use this motherboard inside a Media Centre, say.


One feature of particular interest to the Media Centre crowd is the Q Fan Control that allows you to automatically control the speed of the CPU fan and a single chassis fan by selecting your choice of Performance, Optimal or Silent profile in the BIOS.


Other features are less thrilling such as the ability to overclock the iGPU in the BIOS. We would prefer to avoid stressing the chipset and its cooler as it would surely raise the temperature even further.


The fundamental problem with the Asus is that the GeForce 8300 chipset doesn’t deliver anything you cannot get with the AMD 780G unless you happen to be won over by Hybrid SLI with its twin technologies of GeForce Boost and HybridPower so for the time being we’ll stick with an AMD chipset to support the AMD Phenom.


The Nvidia GeForce 8300 chipset does no more than a reasonable job of supporting AMD’s Phenom and taken in combination with the poor layout of the Asus M3N78 Pro we ended this review glum and unimpressed.