I’ve been waiting for what seems like an age to get my hands on a quad-core Phenom processor to plug into an AM2+ motherboard and now, finally, the time has arrived.


Phenom uses Socket AM2+ which is backwards compatible with AM2 so you can plug an Athlon 64 X2 into a Phenom motherboard if you want to go the incremental upgrade route. You won’t get the benefit of the new HyperTransport 3.0 bus or support for DDR2-1066 memory, though.


Phenom is supported by AMD’s new 700 series of chipsets with 790FX at the top of the tree with 42 lanes of PCI Express that can be divided in a number of different configurations depending on what expansion cards are being used. Lower down the pecking order is the 770 chipset that, although similar, has fewer PCI Express lanes. Both chipsets continue to use the elderly SB600 Southbridge, which supports 10 USB ports, four SATA devices, and HD Audio. However we are told that SB700 is ‘coming soon’ and will bring with it extra USB and SATA ports, as you would expect, plus a new feature called Hyper Flash which brings similar technology to Turbo Memory to the desktop.


This Asus M3A32-MVP Deluxe WiFi AP Edition uses the top-of-the-line AMD 790FX chipset so it should serve us well as a benchmark for the Phenom motherboards that we shall doubtless see over the coming months. 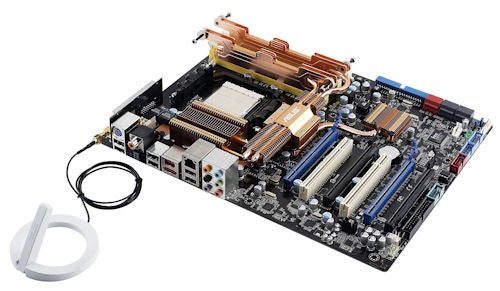 
The other feature of the Asus that stands out is the comprehensive cooling system that links the power regulation hardware to the Northbridge and the Southbridge. During testing the Northbridge cooler ran at about 50 degrees Celsius which is perfectly reasonable but it felt as though most of the heat was coming from the SB600 Southbridge. When you consider that the memory controller is inside the CPU core it’s clear that the Northbridge doesn’t do much besides handle PCIe traffic for the graphics and, as we were testing with a single HD 3850 graphics card, this part of the chipset was idling along. By contrast the Southbridge was working harder as Windows Vista thrashes the hard drive at all times as part of its wretched pre-fetch technology.

We’ve not finished with the cooling as Asus has included a new feature with this motherboard called Cool Mempipe. It’s an intriguing piece of hardware that clamps onto your two modules of memory and links them with heatpipes to a block that screws onto the Northbridge cooler. In principle the system works well however – and it’s a big however – unless you plan on removing the original heat spreaders that came with your memory, you won’t really see the full benefit of the system. That oh-so-fancy enthusiast memory we all buy already has its own cooling system so just tacking more metal to the outside is unlikely to cool things down a great deal more. And, using the cheap stuff that doesn’t already have fancy heat spreaders is not going to cope with being pushed very far anyway.


The list of features of the M3A32-MVP Deluxe WiFi AP would be fairly basic, apart from the host of PCI Express lanes, if it relied on the chipset alone. So Asus has used a plethora of add-in chips to add eSATA, FireWire, more SATA, surround sound and Gigabit Ethernet functionality as well as a riser card for 802.11g wireless. If you don’t want this WiFi-AP feature you can buy the M3A32-MVP Deluxe for £161 and save yourself about £10. Incidentally we’ve found the Asus listed as low as £132 but that was with etailers who didn’t have the board in stock. 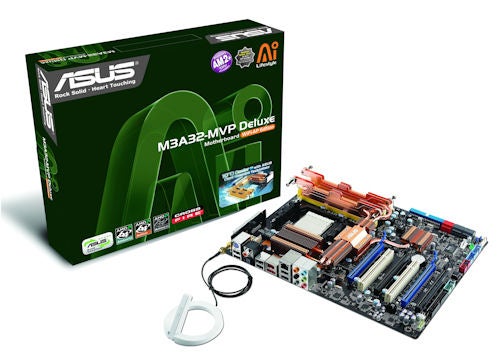 Performance of the Asus was uninspiring, no doubt in part thanks to the low clock speeds of the new Phenom processor, but there are clearly other issues at work. The BIOS is the usual Asus work of art that offers every overclocking feature under the sun but it would seem to need some work to sort out memory speeds. The Corsair RAM we used was reported as running at 533MHz with an Athlon 64 X2 6400+ processor, instead of the 800MHz we expected, and we had to force it to run at 1066MHz with the Phenoms. AMD has told us that SiSoftware SANDRA, our preferred benchmark for memory bandwidth, doesn’t correctly report how Phenom works with memory. Both of these points cause some surprise when you consider how long Phenom has been in development.


We tried to overclock the Phenom with the Asus AI Overclocking feature in the BIOS but it wouldn’t even boot into Windows at +5 per cent. So we turned to AMD’s own OverDrive, utility, which was in action at the Warsaw launch of the Spider platform, and found that once the software was installed it wouldn’t run as it decided that our Phenom isn’t an AMD CPU. All in all, not the best start. 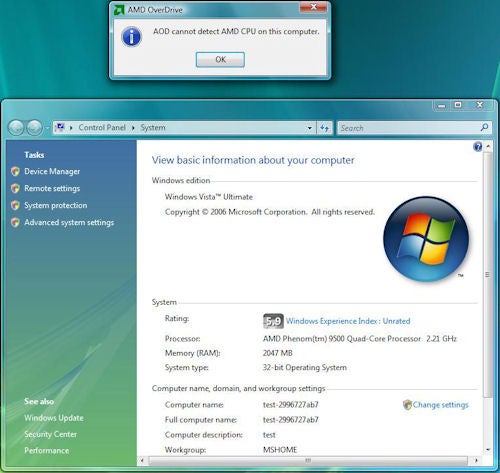 
It’s clear that the new Phenom processor and 790 chipset have plenty of potential but even this excellent new Asus motherboard has a few issues, so for the time being we’ll stick with Core 2.