Ever since launching the first Atom-powered netbook, Asus’ Eee brand has led the way in all manner of other Atom-based fields – if rumours are to be believed we will soon be seeing Eee-branded keyboards, phones, and even mirrors. For now, though, we’re looking at a humble all-in-one touchscreen PC, the Asus Eee Top. Although we’ve already reviewed one of its competitors’ machines, Shuttle’s XVision X50, the Eee Top was actually the first of the Atom-powered all-in-one PCs to hit the market so it will be interesting to see how it holds up.


We have to admit the Eee Top didn’t particularly excite us in the looks department. Sure, it might have some applications in the classroom but for the most part we see it being used as a second PC in the kitchen or living room, in which case the styling is a little bit too twee. Also, the fake plastic speaker grill just screams cheap. In this regard, the Shuttle XVision X50 definitely has the upperhand, despite quite clearly having taken ‘inspiration’ from the Eee Top’s design. 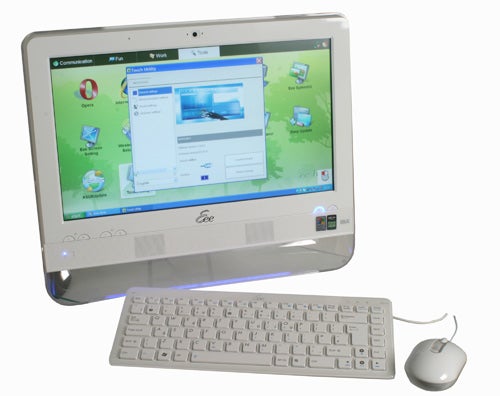 Whether the styling is to your liking or not, the build quality should please all as the largely plastic chassis uses thick panels that feel strong and sturdy and didn’t appear to pick up any scratches in the time we had it. We did notice a problem with the rubber strip that runs under the front of the machine, though. This is used to keep the PC from slipping – a task which it does admirably.


Unfortunately, when dragging the PC along our desk to adjust its positioning, this strip gripped the desk surface so well that it tore itself free slightly from the plastic stand. Luckily the glue used to hold the strip in place still had sufficient stickiness to reattach the strip, but this did happen on multiple occasions so could eventually lead to a permanent problem once the glue loses its effectiveness. 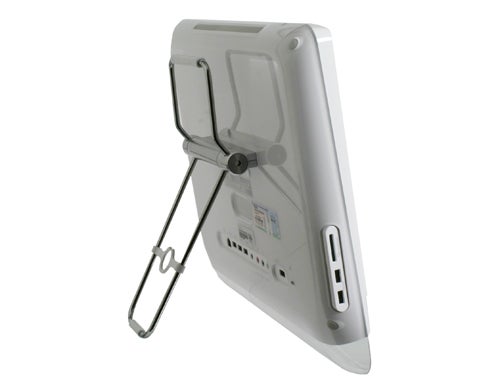 Round the back there’s an adjustable stand for altering the angle of the screen while incorporated into the same mechanism is a carry handle. This is a less elegant solution than the one employed on the X50, where the stand flips round to double as a handle, but it is actually more practical in use.

Another more practical element is the positioning of the Eee Top’s various connections. While the X50 had all but its VGA connection on its sides, the Eee Top keeps all but two USB ports and its multiformat (MMC, SD, SDHC, XD) card reader on the back where they’re out of sight. Running from left to right we have a gigabit Ethernet port, three USB 2.0 ports, the power socket, microphone, line-in, and headphone jacks (that double as analogue surround sound outputs), a further USB 2.0 port, and a Kensington lock slot.

The one obvious omission here is any kind of optical drive, which means you’ll have to use a USB drive if you want to watch a DVD or install a program. Also, some people may want an additional video input so the screen can be used like a conventional monitor but, like the X50, this is not an option.

Back to the front and there’s a webcam incorporated in the centre of the top part of the bezel. It comes with some very fancy software that lets you apply all sorts of weird and wonderful effects to your image. However, with a resolution of only 320 x 240 pixels, it fails at that most basic remit of providing a half decent image. Arguably it’s still useable but it’s noticeably poorer than most and we struggle to believe that a decent webcam would have added considerably to the Eee Top’s overall cost. 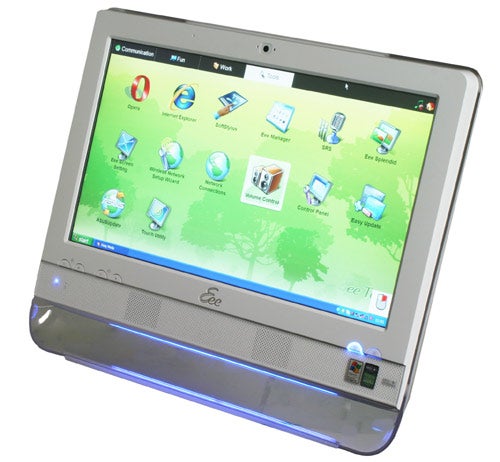 More impressive are the speakers that sit below the screen. They’re by no means audiophile quality, with a distinct lack of bass being their biggest problem, but they provide an adequate level of volume to fill a kitchen or small living room and far surpass those of the Shuttle X50 or most laptops.


Although it features a touchscreen, the Eee Top still ships with a mouse and keyboard for those occasions when you need to type more than just a web address or an instant message. The keyboard uses full size keys but lacks a number pad and the cursor keys and PgUp/PgDn/etc keys are all bunched up on the right hand side. Despite this, it’s still a very comfortable and easy to use keyboard with a key action that is shallow but features a nice positive break. It also houses a stylus, though our review unit was missing its one so we can’t vouch for how good this was. 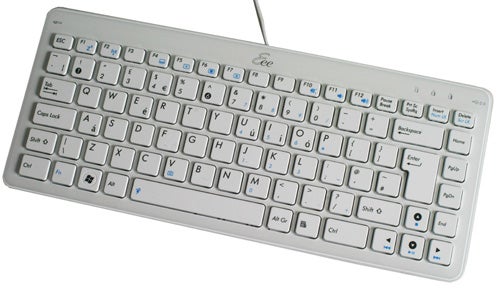 The mouse, meanwhile, is smaller than your average rodent and features a very short cable. There is method to this, though; the mouse is designed to be plugged into the USB port hidden under the right side of the keyboard – Apple style. As well as being small, it’s ambidextrous so can feel a little odd to those of us accustomed to larger ergonomic mice. Nonetheless, it’s perfectly decent in terms of performance and incorporates a notched scroll wheel with middle click button. 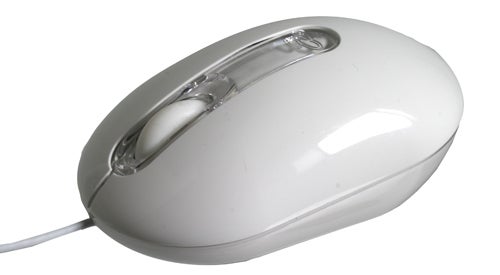 Moving onto the Asus Eee Top’s pièce de résistance, we must admit to being impressed by the image quality of its touchsceen. Even though it has a slight milky finish due to the touch element of the screen, its backlighting is even, viewing angles impressive, colours bright and vivid, and sharpness perfectly acceptable. Colour accuracy is quite poor, though, with evident dithering and some distinct green and red tinges appearing in Displaymate’s grey scale tests, so this won’t be a device you’ll want to edit images on, for instance.

The Eee Top’s screen does, however, excel with its touch sensitivity. This was our real bugbear with the X50, as Shuttle simply hadn’t made any changes to the Windows interface to make it finger-friendly. Here, though, Asus has pulled out all the stops to make using this PC without a keyboard and mouse (or stylus) quite easy. 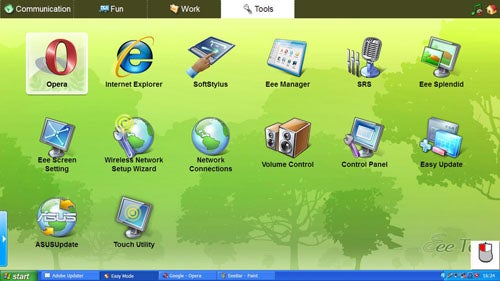 For a start, there’s a custom program called Easy Mode that sits on top of the desktop and provides one-touch access to commonly used programs including a web browser (a custom finger-friendly version of Opera is an option as well as Internet Explorer); productivity programs in the form of Sun Microsystem’s Star Suite; webcam software; and email. The shortcuts are split up into a tab structure with four categories on offer; Communication, Fun, Work, and Tools, so it’s always easy to find the program you’re looking for. 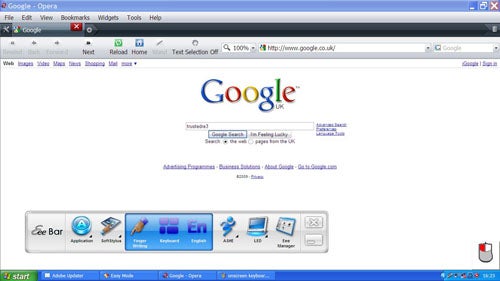 Asus has also implemented the Eee Bar. This appears as a slim slideout bar and provides similar shortcuts to Easy Mode but adds in the sort of functions that are normally reserved for Fn button shortcuts on laptops, i.e. things like adjusting the brightness of the blue glowing strip and switching between performance and power saving modes. From here you can also access the excellent custom onscreen keyboard. Developed by Motorola and called Soft Stylus this is a semi-transparent onscreen keyboard that automatically sits above all other open programs and can be stretched and pulled to the size you want. It makes typing on the screen an absolute breeze. 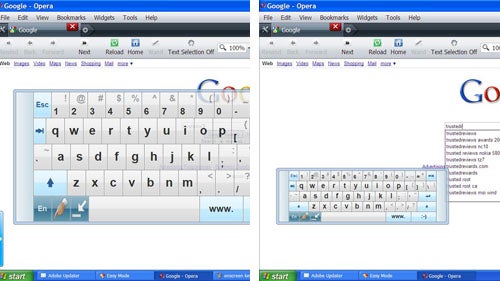 So the Asus Eee Top is a top-notch device but does that mean you should go out and buy one? Well, with it costing around £430, it’s significantly cheaper than most all-in-one touchscreen PCs, so if you’re in the market for one then it’s definitely worth considering. However, if you just want a small PC that isn’t going to clutter the house up then you may be better off with a cheap 15.4in notebook that can be had for the same money. You’ll invariably get a faster CPU, a larger hard drive, more RAM, and true portability, though you will of course lose the touchscreen.


The Asus Eee Top lacks the horse power to replace most people’s main home PCs. However, its small and elegant form factor combined with a highly accomplished touchscreen interface and low cost makes it the perfect second computer to sit in the corner of your living room or kitchen.