Asus is once again ahead of the competition and is the first company out with a dual x16 SLI motherboard. The A8N32-SLI Deluxe is one of the first motherboards with two PCI Express graphics card slots that offer the full bandwidth of 16 lanes to each slot. Rather than releasing a new chipset altogether nVidia made a 16 lane PCI Express controller called the SPP 100.


This enables both graphics cards to get the full PCI Express bandwidth, although whether this results in higher performance with today’s hardware is debatable. According to nVidia the 512MB 7800 GTX cards are those that benefit the most from having the full x16 bandwidth in SLI mode. Sadly, I didn’t have two 512MB cards at hand when I tested the A8N32-SLI Deluxe so there was no way to verify this claim.


Another interesting point is that Asus has worked closely with Corsair when developing this board and as such both companies are recommending each others products. In this case it’s specifically the Corsair XMS3500LL Pro memory which has been designed to work in conjunction with the A8N32-SLI Deluxe. This memory has a latency of 2-3-2-6 and the modules are rated at 438MHz.


However, the standard is PC3200 or 400MHz memory, so it might seem odd to have only a slight clock increase. The reason for this is that the latest stepping of AMD processors have a new memory controller that allows for a new range of multipliers to be used. As such the XMS3500LL Pro modules can be run at the rated speed without any parts of the system having to be overclocked. 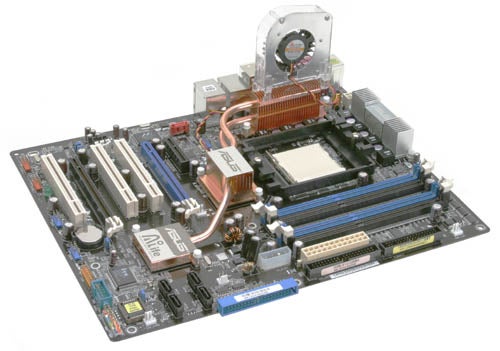 This only brings a slight performance increase, but if you’ve already decided to build a high-end system you’d want to squeeze every little bit of performance out of it. For most people this means overclocking and although this is something TrustedReviews isn’t generally into, the benefits are there for those that want to pursue them and the A8N32-SLI Deluxe is more than up to the job.


The reason why I mention this is because this is the first motherboard with eight phase power regulation I’ve come across. Gigabyte is offering six phase with the help of an external module, but in the case of the A8N32-SLI Deluxe this is all onboard. It is hard to prove how much this reduces ripple and other “dirty” elements in the power without having access to some fairly sophisticated equipment, but it’s definitely not a bad feature.

Due to the complex power regulation Asus has fitted rather large heatsinks to the MOSFETS – as they get quite hot – and has followed up on the passive chipset cooling from the A8N-SLI Premium. However, as the board is now using a two part chipset, there are now two heatpipes, one from the main chipset and one from the SPP. Both terminate in the same copper radiator which sits on top of the rear-most MOSFETS.


The heatpipes are blocking access to certain parts of the motherboard and a graphics card with a large passive heatsink on the back might not work in the top slot. However, something like the Asus Extreme N7800 GT Dual – that’s the huge dual-chip 7800 GT card from Asus (review coming soon) – fits in the lower slot. This might sound odd, but as this is the primary x16 PCI Express slot it makes sense. 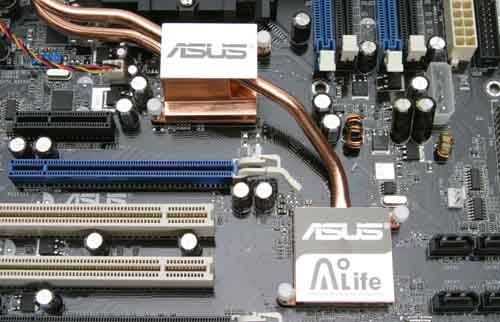 Another problem that might occur is that some very large CPU coolers would be hard to fit to the board, as there isn’t a lot of space between the heatpipes and the CPU socket. Generally this shouldn’t be a problem though, but something worth bearing in mind if you plan to use an oversized CPU cooler. For those wanting to use a passive heatsink or a watercooling kit on the A8N32-SLI Deluxe a fan is provided that has to be fitted to the heatsink where the heatpipes terminate. This is because it won’t be sufficiently cooled in such a system. This is easily installed by clipping it in place.


The rest of the board is up to Asus usual standards, although the layout gets crowded at times. Starting from the top working our way down, the power connectors are placed towards the top of the board with the 24-pin ATX connector located between the memory slots and the top IDE connector. The second IDE connector is angled at 90 degrees, something that can help keep cables tidy in your case if there is enough room in it.


There are only four SATA II connectors at the front of the board, but a further two are located at the rear, one internally and one externally. In terms of expansion slots there is a x4 PCI Express slot and three PCI slots as well as the two x16 PCI Express slots.

The rear I/O consists of two PS/2 ports, a parallel port, coaxial and optical S/PDIF out and the SATA II connector, though without a power connector. There are six 3.5mm audio jacks but sadly Asus has yet to integrate a high quality audio chip as the nForce 4 chipset only supports AC97 sound – four USB 2.0 ports and two Ethernet connectors. Both of the network chips onboard operate at Gigabit speeds, one being part of the nVidia chipset and the other being a PCI Express part from Marvell.


Extra brackets are also supplied for a serial port, two FireWire ports – one four and one six pin – and one with two USB 2.0 ports and a game port. A further two USB headers are available for case mounted USB ports. Asus also offer a wireless version of the A8N32-SLI Deluxe where the USB header towards the rear of the board is replaced by a small wireless card. This works via the USB bus and as such you lose one USB header. As the board is passively cooled there are four free fan headers once you’ve connected the CPU cooler. 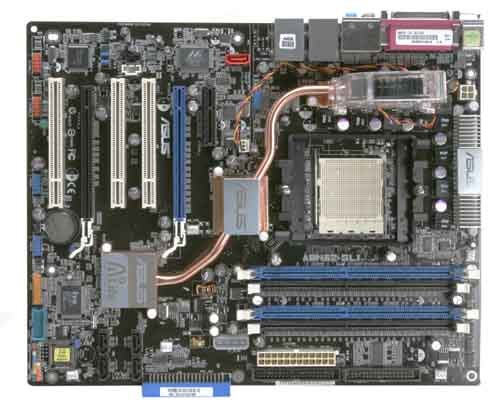 The remaining accessories in the box consists of two IDE cables, a floppy cable, five SATA data cables and three SATA power adaptors – of which two offer connectors for two devices. Let’s not forget the all important SLI bridge connector which in this case is made of a soft flexible material, rather than the hard PCB ones we’ve seen in the past. Asus also provides a copy of WinDVD Suite from InterVideo as part of the package.


So far so good, but the A8N32-SLI isn’t perfect as our tests showed that it’s was not much faster than its little brother, the A8N-SLI Premium. However, this is an early board with an early BIOS. Asus supplied a couple of BIOS upgrades but neither seemed to make any real difference. My main gripe here is that no matter what BIOS settings I used the memory wouldn’t run faster than 200MHz – or 400MHz DDR – which means that you wouldn’t get the most out of the Corsair modules. Also, if you own an FX processor the current BIOS version won’t allow you to change the CPU multiplier, even though these processors are unlocked.

With regards to performance, this is not a slow board by any means, but I nevertheless expected it to perform better than it did, especially with 2GB of memory fitted. Still, 215 as an overall score in SYSMark 2004SE isn’t to be sniffed at. The PCMark 2005 scores were all an improvement on the A8N-SLI Premium. AS you might have noticed we’ve updated some of our benchmarks to the latest versions and as such some of the numbers aren’t comparable to older test results. We’ve also had to create a new demo for Half-Life 2 as the updates to the Half-Life 2 engine rendered the old demo unusable. 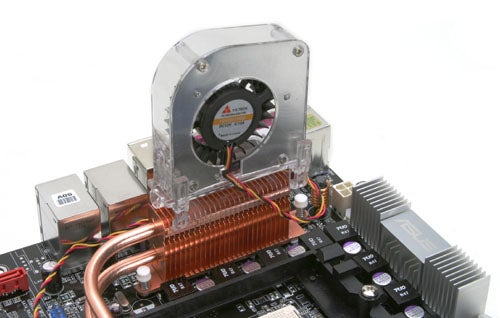 You wouldn’t be disappointed with this board if you built a gaming system based on it as all of our benchmarks put in good numbers. Although with two 7800 GT cards you wouldn’t expect anything less. The only game that didn’t breach the 100fps barrier was Far Cry but this is the toughest of the 3D tests.


At £140.99 the A8N32-SLI Deluxe is expensive, but as it’s a brand new product the price is likely to come down. It offers some advantages over the A8N-SLI Premium but unless you feel that you need dual x16 PCI Express slots the A8N-SLI Premium is the more affordable alternative.


The A8N32-SLI Deluxe is the first of the true dual x16 slot PCI Express motherboard to hit the market. It’s got a few minor issues, but Asus is working on sorting them out. Don’t expect a major performance increase, at least not unless you can afford the new 512MB 7800GTX cards, but it’s a well designed board with loads of features. 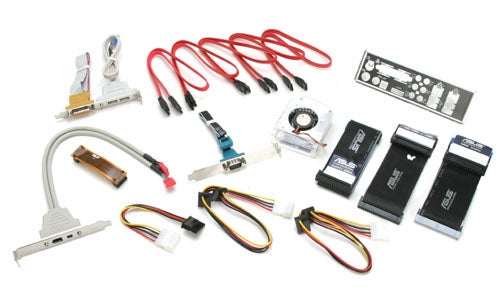