Asphalt is one of mobile gaming’s longest-running franchises, having fired up its engine for the first time in 2004. The latest in the dynasty of arcade racers is Asphalt 7: Heat. It has real cars, tracks based in real cities and physics that – ok, the physics are in no way realistic, but any game that lets you powerslide for a kilometre can’t be bad, right?

Asphalt 7: Heat is takes the gaming DNA of console racer series like Need for Speed and Burnout, shrinks it down, slaps a low price tag on it and hopes for the best. Like many of Gameloft’s games, it could be accused of being “game design by the numbers”, but that doesn’t mean it’s bad. 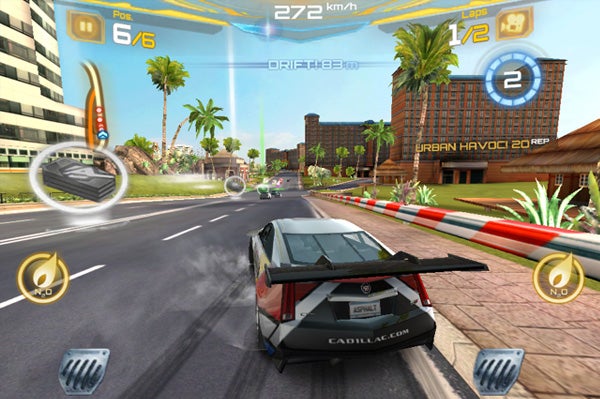 Such claims burst in to flames, in our book, because Asphalt 7: Heat is undeniable fun. Taking a slightly exaggerated approach to racing, it’s pure “arcade” in style. But the inclusion of fully-licensed cars (60 of the things) and well-designed tracks based on real locations gives it a grounding that’s missing from some arcade racers.

Like many iPhone racing games, Asphalt 7: Heat lets you choose from a selection of control methods, including those with accelerometer controls, finger-operated steering wheels and simple touch controls. A little too attached to our dignity, we immediately switched to the standard touch type. 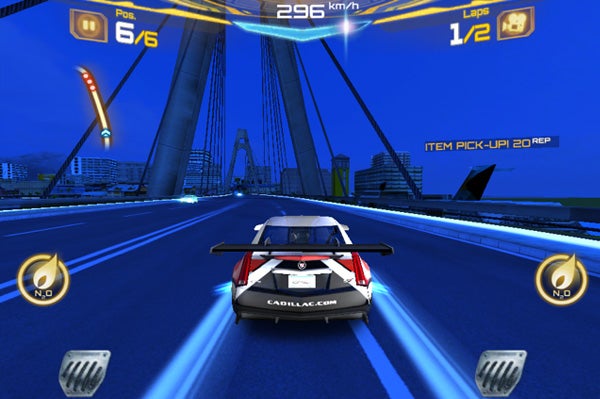 This scheme offers three sets of tappable zones on each side of the screen – the top turns, the middle uses nitro and the lower part uses break. Following the conventions of the (sub)genre, if you break while turning, your car will be flung into a powerslide, which you can easily break out of with another tap on the break. Sliding earns you nitrous, as does taking down a fellow racer.

In games like this, you never really lose control of your car as such, but you react too slowly as your car careers headfirst into a barrier, earning you a glimpse at the “wrecked” screen. At the very start of the game, the relatively slow speed of the cars doesn’t bring out this threat all that much, but Gameloft has been careful to mix and match the speed of cars you use throughout the 15 cup tournaments – each of which is broken down into events. 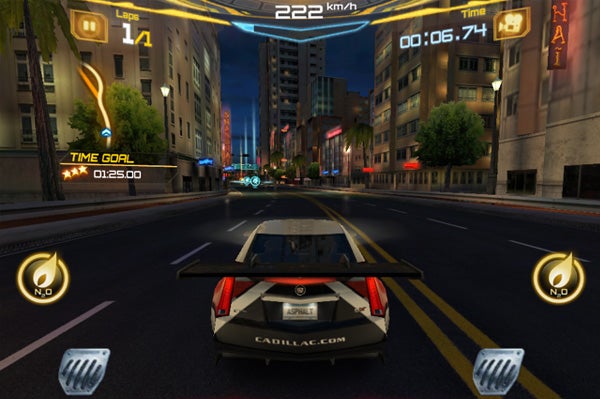 Rather than simply plodding through a sequence of improving cars, from the perennial Mini Cooper to the Koenigsegg WhatsitThingy, Gameloft has employed seven leagues of cars. Each event is limited to a league, subsequent events skip between them so while you’ll unlock better cars within each as you go, you’ll never get too far away from the (relative) slowcoaches. A league seven car is so fast, you need quick reflexes to keep up.

What Asphalt 7: Heat lacks in personality and character, it makes up for with design choices like this that keep you from getting bored. It’s similarly careful with its use of different race types. There are a half-dozen or so of these, ranging from straight races and elimination events to “classic arcade” time trials, knockout races and ones where you must try not to scratch the paintwork on your shiny car. They’re mixed-up deliberately, and a few are held back for special occasions. 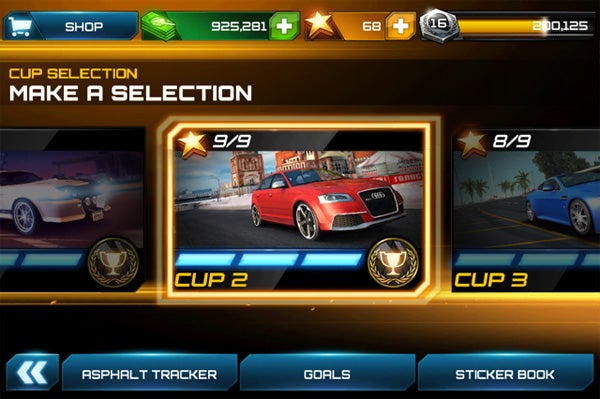 While the only barrier to each of the 15 cups is to have gained a certain number of stars, earned from events and achievements, your progress through the game is carefully directed. As is your progress from race to race. At each turn, you’re asked if you want to post to Facebook, or buy a “bonus” for the upcoming race. The former in particular is a little annoying. And if you’re not careful with your in-game cash you will feel Gameloft trying to nudge you towards micro-transactions come the 5th cup, where races go from easy to… really quite challenging.

Although seemingly geared a little more toward social network pest-making and micro-transactions than its predecessor, there are some definite improvements in Asphalt 7: Heat too. The visuals are a good degree shinier, for one. A critical eye will tell that the textures and models of the environments are somewhat basic, but Gameloft has piled on enough visual effect to give Asphalt 7: Heat an impressive look. And once you get behind the wheel of one of the faster cars, the simpler textures start to make more sense. 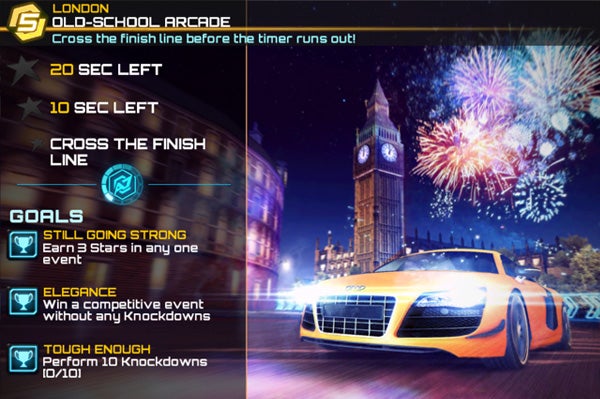 Another improvement Gameloft has been shouting about is improved crash physics – which have been historically pretty awful. And… they’re still fairly bad, but at least your car flies off and spins into oblivion rather than stopping dead. The game also includes a basic multiplayer mode for up to five players. And for 69p, that isn’t bad.

Asphalt 7: Heat doesn’t offer a great deal of innovation or personality, but it is a pretty great arcade racer. It is fun, carefully structured to keep you engaged cup-after-cup and offers an impressive amount of content for the price.