I first heard of Asetek a couple of years back at an Abit press briefing. There were two guys there from Denmark showing of a new product which could cool down a CPU to -12 degrees Celsius, which at the time was pretty amazing. Things have moved on since then and the latest iteration of the VapoChill system from Asetek is more powerful than ever. 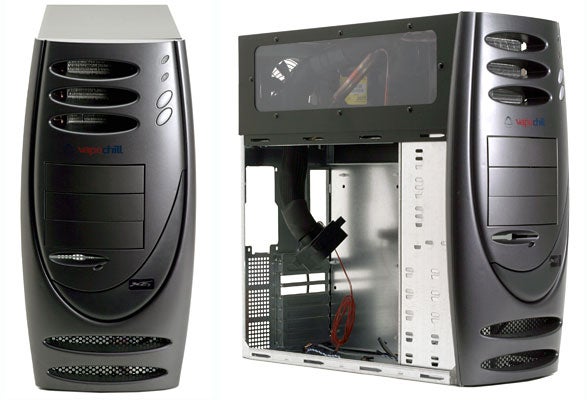 The VapoChill XE II is the second product from Asetek to have a mains powered compressor, as the previous models relied on 12V compressors. However, the XE II is built inside Asetek’s trademark case, while the LightSpeed (the previous mains powered product), still needed a case to go with it. Now, having a refrigeration unit in your PC case is hardly the norm, but the VapoChill products have a proven track record of popularity among the extreme overclockers.


This is really the sole purpose of the VapoChill products, to get the most out of your processor. There are of course other ways to do this, but most of those are much more complicated to install and won’t deliver the same kind of cooling performance. Watercooling is the most obvious solution at the moment – it is cheaper, but not nearly as efficient as refrigeration for cooling a processor. 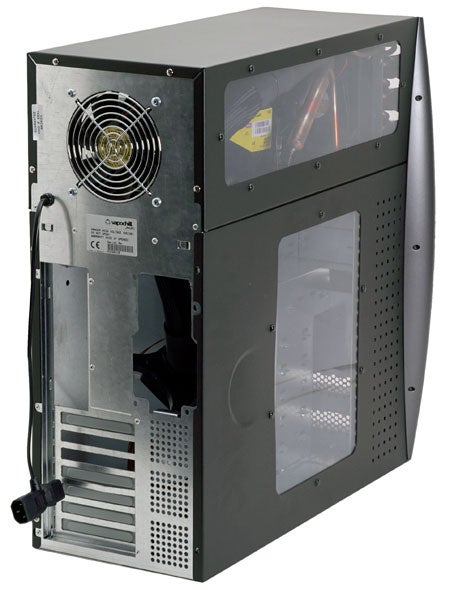 Asetek has stayed true to its original case design – unfortunately I wasn’t a fan of it then and I’m still not a fan now. Due to the complex cooling system, the case is taller and slightly wider than a standard ATX tower case. But this is not the issue; it’s the general look and feel of the case that’s disappointing, especially considering that you’re spending well over £500 on one of these setups.


The front bezel is made from plastic – as are many other cases – but it doesn’t feel as well built as some other high-end cases on the market. The material used in the steel part of the case looks cheap, like the stuff you’ll find in cheap generic cases. But to be fair to Asetek, the material is much thicker and there are no sharp edges to be found, which is one sign of a quality ATX case. The front panel design is what puts me off most though, but I’m sure there are people that would disagree with me – as with all aesthetic issues, it’s a matter of personal taste. 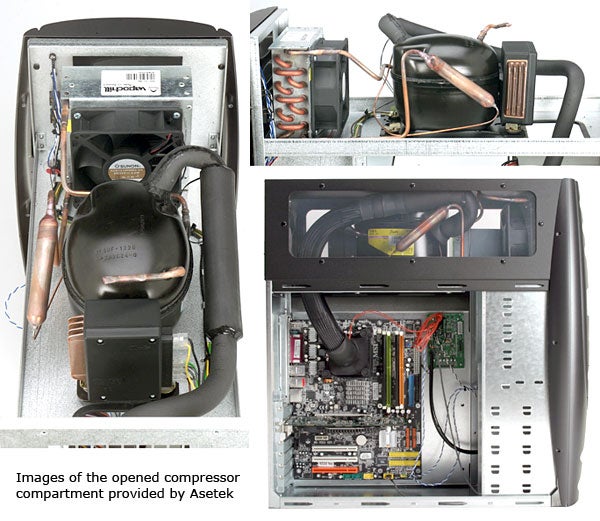 The installation procedure has been improved vastly over earlier Vapochill cases, but it’s still not hassle free. There are two heater elements that have to be fitted, one to the back of the motherboard and one inside the CPU cooler. Why the second one doesn’t come pre-installed I don’t know, but it would certainly make things a lot easier if it were.


Several pieces of foam material also have to be fitted in place to keep the cold away from the rest of the PC. A small PCB is also part of the package and has to be installed inside the case – preferably on the motherboard tray – with some plastic pins and adhesive pads. The PCB controls the compressor part as well as the heater elements via some Windows based software that’s supplied. 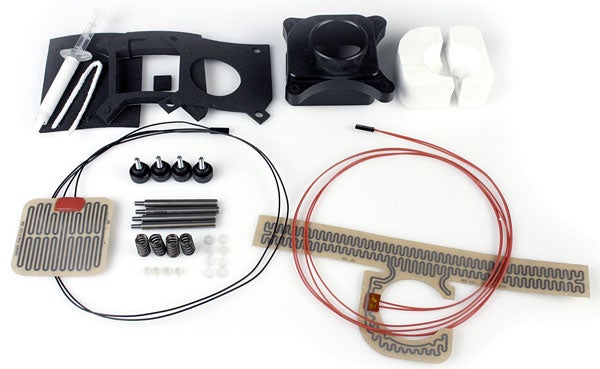 Now this whole process would have been a lot easier if the Vapochill came with detailed documentation, but unfortunately it doesn’t. Asetek ships two manuals with the case, which can cause some confusion. You have to read both manuals before you can assemble the system, but due to the poor quality of the pictures and lack of detailed explanations in some parts, the initial setup is far from straightforward. This could easily be remedied by the inclusion of a colour manual with more pictures and a detailed step by step guide. Obviously the Vapochill isn’t aimed at the PC novice, but even a seasoned PC builder doesn’t need to have his job made harder for him. 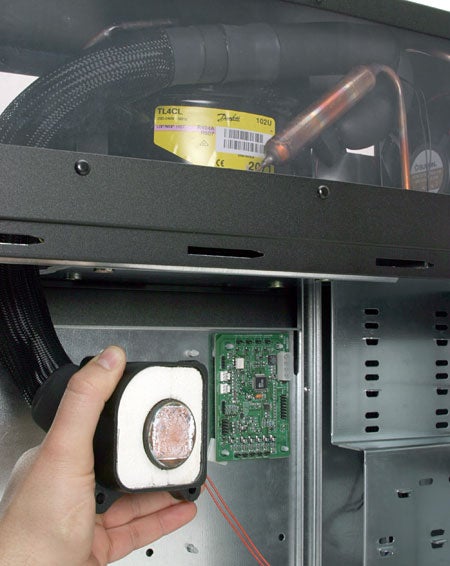 Asetek offers two versions of the Vapochill XE II, one for Socket-775 (the one reviewed here) and one for older Pentium 4 boards and Athlon 64 processors. The only thing that differs is the housing around the cooling hose from the compressor and some of the mounting equipment. Asetek also offers an optional LCD display, although you would have to mod the case to make it fit. This display will show you the temperature of the cooling head and future versions of the Asetek software will allow for more features.


Don’t expect the Vapochill XE II to be silent either, as it’s not. The two fans can be controlled via the Windows application and don’t make a lot of noise per se, but the nature of having a refrigeration unit inside your PC case will give you that old fashioned fridge compressor noise. Not only is the sound intrusive, but the case does actually vibrate as a result. That said, a machine like this is likely to be on the floor under your desk, and the sound will probably be drowned out by the aural effects of the game you’ll be playing.

All problems aside, the Vapochill XE II is an impressive product and the review sample kept the 3.46GHz Pentium 4 Extreme Edition processor at a cool -33 degrees during all the tests. Although there were limitations to how far the test system could be pushed, close to 4GHz was not a problem. Using an MSI 925XE Neo Platinum motherboard and 1GB of PC5300 Crucial Ballistix memory I managed to push the system over 4GHz but it wasn’t quite stable enough to run a full set of benchmarks. In the end I had to settle for 3.9GHz on a quad pumped 325MHz bus by lowering the CPU multiplier to 12x rather than its default 13x.

At default speeds, with a GeForce 6800GT graphics card, the SYSmark 2004 score was 195, which rose to 211 at 3.9GHz – although that’s a mere 8.2 per cent increase, a few points at the upper end of SYSmark 2004 represent a decent performance difference. The CPU score in PCMark 2004 shows a much larger increase up from 5337 to 6029, an increase of almost 13 per cent. This is however based on CPU overclocking only as no other part of the system was overclocked. So you could squeeze a lot more performance out of your PC if you tweaked all the other parts as well.

Looking at some current games, Doom 3 gained over 14fps in 1,024 x 768 with 8x anisotropic filtering enabled. With 4x anti-aliasing this gap was a mere 0.6fps, but this is of course down to the graphics card as well. At 1,600 x 1,200 the results were pretty much identical, which goes to show that a fast CPU is not as important as it used to be when running games at high resolutions.


The Vapochill products have always been aimed at the high-end enthusiast market and are likely to remain so for a while yet. I was disappointed by the build quality of the case and the poor instructions, but much of this could be easily rectified. Some sound proofing would also be a better investment than the clear windows on the side of the compressor, to dispel some of the fridge sound effects.


As I said in the beginning of this review, a Vapochill case is not cheap and this review unit will set you back £571.16 while the version for Socket-478 and AMD Athlon 64 processors is only slightly cheaper at £543.14. Personally I couldn’t imagine spending this much money on high-end cooling, but then again, I’m not trying to get every last MHz out of my PC. Perhaps if the case looked as good as it performed, the price might be a bit easier to swallow.


Asetek has produced one of the most impressive cooling solutions around and it will allow you squeeze every last drop of performance from your CPU. The Vapochill is far from cheap, but just like modding a sports car, you pay a high price for that extra performance.