In other words, we have something here that undercuts and out-specs the 8GB version of Sandisk’s ever-lovable Sansa Clip, which currently retails for nearly £10 more, and should – on paper – be the MP3 player bargain of the year. Has Archos created a stripped-back classic, or has the quality baby been tipped out with the bargain basement bathwater? 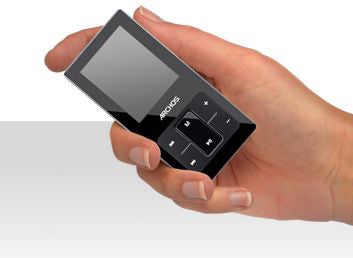 Well, it has to be said that the manufacturer has made a lot of intelligent choices here. For one thing, while the Archos 2 isn’t the most stylish player in town – and that’s putting it mildly – it doesn’t feel like it’s been built to hit such a low price point. Measuring 84mm x 41mm with a thickness of around 9mm, it’s roughly the size of the mid-range E series Sony Walkman, though its 1.8in screen is a little smaller than Sony’s 2in effort.


The gloss white plastic front of the case is complimented by a chrome back and, bar the slightly cheap feeling buttons, the unit feels solid and reasonably tough. The headphone socket sits next to the (hurrah!) standard mini-USB connector on the bottom edge, while the top edge hosts an on/off/hold switch and (double hurrah!) a microSDHC slot, which enables you to take the capacity up to 16GB or 24GB with an appropriate card. This isn’t the sort of feature you expect on a £40 player.


I can say the same about the Archos 2’s GUI. While primarily text-based, it makes selective use of animated icons and colour. It’s quick to start up, snappy in use and relatively easy to navigate. The forward/backward buttons on the left scroll up and down through the available options or items, the M and Play/Pause buttons act as a menu toggle and select, respectively, while the up and down buttons on the right are mostly restricted to volume control. Albums and tracks can be browsed via file/folder or via iD3 tag, and the only odd thing I noticed is that songs on an album are occasionally listed out of the correct order for no clear reason.

Otherwise, my biggest complaints about the GUI are that, first, the ‘now playing’ screen doesn’t include album art or even artist or album information, just the track name, an animated EQ, a track progress bar and the bit-rate and, second, the player doesn’t provide a unified list covering tracks on the internal memory and tracks on the MicroSD card. You have to flick from internal memory to the SD card and then browse through. Playlist support is also poor; or rather entirely absent. It’s one thing not to let you create them on the fly, but to ignore them altogether is a bit of a sin, even on a player this cheap.


The 1.8in CSTN screen, meanwhile, is better than you might expect, if only because your expectations at this price point will probably be fairly low. The 160 x 128 resolution is lower than you’d get from, say, Sony’s E-Series Walkman, so even at this size there’s a degree of pixilation, but in terms of brightness and contrast it’s at least as good if not better than the screen you’d find on the average budget mobile phone. Viewing photos or video it’s clear that the colour depth is limited and there’s no real detail to speak of, but I’ve seen an awful lot worse. 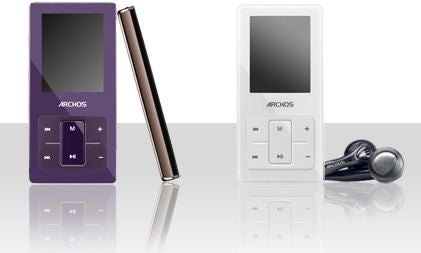 In terms of functions and features, the Archos 2 isn’t as stripped back as I expected it to be. The FM Radio can be set to auto-scan for available stations, and you can save favourites for future use. There’s a photo viewer with a basic slideshow feature and a decent voice recorder too, plus a text viewer hidden away in the Data section of the Files menu.


While the Archos doesn’t have the games, calculator, flash player and clock applets that are appearing in some mid-range PMPs, I don’t really lament their absence. Most of the time you just want something that will play music and movies, and in both cases the Archos 2 does the job.


Well, sort of. The Archos 2 will play video files, but only if they’re in an AVI container, and only then if you use the (rather nasty) app provided to convert them to the players preferred format and resolution. Playback itself is slightly jerky, and the whole experience less than comfortable on the 1.8in screen, so I can’t say I’d recommend the Archos 2 if you wanted to watch anything beyond the odd clip.


For music, luckily, the Archos 2 fares better. The sound isn’t particularly warm, punchy or exciting, but it is clean, not overly bright and with a solid bottom end. Almost needless to say, the supplied earphones are bordering on awful, making the output sound tinny and insubstantial with a weak, muffled bass and a messy mid-range. Plug in some decent ‘phones, however, and things improve dramatically.

You don’t get the same snap and energy with pop tracks that you might get from, for instance, Cowon’s S9 or Sony’s NWZ-S639F, and in A-to-B tests the Philips GoGear Opus makes the Archos 2 sound slightly dull, but in isolation the output is well-balanced, clear and enjoyable. If the player has weaknesses, it’s that the mid-range is probably a little too thin to carry heavy rock music, while fans of dance and electronic music will probably want something with a bit more welly at the bottom end.


Testing with the Opus, tracks by Massive Attack, Bat for Lashes and Beck didn’t sound as rich and dynamic on the Archos 2, and switching the EQ preset to Bass only made the sound go flat and muffled. If you like electronic or bass-heavy music and fancy the Archos’s low, low price point, then pair it with a set of bass-focused earphones if you want to avoid disappointment.


While we’re being negative, it’s also worth pointing out that, with only ten hours of music playback, the Archos 2’s battery life is distinctly behind the curve. More seriously, file format support is not exactly extensive. MP3? Obviously. WMA? Why, of course. AAC, OGG, FLAC, APE? Not on your nelly. 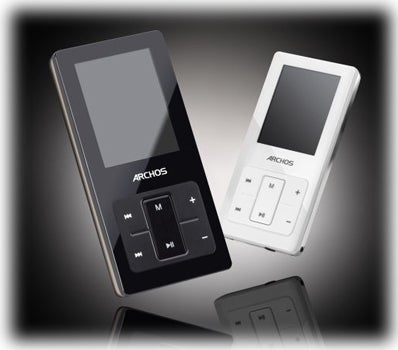 The lack of support for FLAC is particularly galling, as with its high capacity, low price point and expandability, the Archos 2 might have found some love from audiophiles looking for a bargain basement, take anywhere player. Then again, audiophiles will probably also want a player that sounds spectacular, not merely solid. Arguably, though, the money saved on the Archos 2 could be put towards purchasing a better pair of earphones, so things might just balance out overall.


As it is, the major thing that the Archos 2 has going for it is that it’s a lot better than you might expect for the money. Personally, I’d rather spend less on a 4GB Clip or more on the 8GB version and do without video. In fact, I’d rather pony up a little more dough for a more capable video PMP. All the same, were I a cash-strapped chap with a heaving music library, I’d probably be more tempted. If that sounds like you, and you can live without the last word in audio quality, then buy away. In a way, the Archos 2 is the Fiat Panda of the PMP world. It’s not really funky, lovable or exceptional in any way, but it’s affordable and does the job. For some people out there, that’s enough.


The Archos 2 doesn’t excel in any area, but it’s very cheap and the quality isn’t at all bad for the price. There are more exciting players out there, but it’s worth considering if you’re on a tight budget.