Until January 2005, ‘low cost’ and ‘Macintosh’ were words with less association than ‘Pop Idol’ and ‘talent’. In fact, according to Steve Jobs, if he’d received a nickel for every person that had asked him why Apple didn’t offer a stripped down Mac that was more affordable, he’d be a rich man. Now that may not be saying much, as he’s undoubtedly a rich man anyway, but it was certainly a good question and one that the company finally responded to at Macworld this year.


The Mac mini is a master stroke by Apple – it’s essentially a headless iMac, supplied without a monitor, keyboard or mouse, enabling users to get on the Mac ladder for less money than ever before, by reusing their existing peripherals. 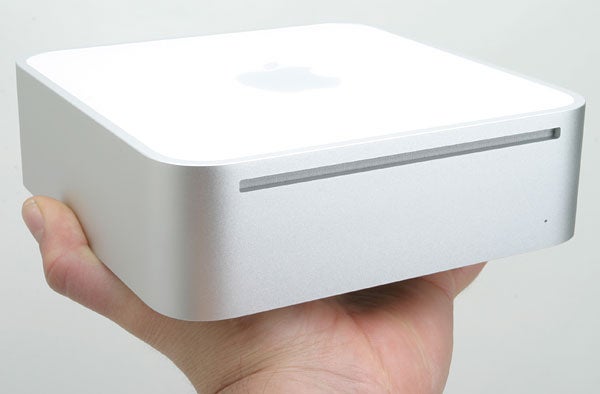 The Mac mini is the Apple computer aimed at ‘Switcher Man’. This is the Windows user who’s already been turned on to the way Apple does things by the iPod, and is now intrigued by what else it can offer. Previously though, Apple’s high pricing was something of a cold shower for the potential switcher, but when the response to the question, “so how much does it cost?” is a mere £339, Switcher Man is, perhaps for the first time, seriously tempted.


However, when you actually see the Mac mini it’s not the price you get excited about, but the size. It’s breath takingly small, packing an entire computer into a box not much bigger than a desktop PCs internal DVD-ROM drive. It weighs 1.4Kg, no more than a typical sub-notebook. When Jobs actually brought it out and held it the palm of his hand at Macworld, the whoops of delight and surprise were as genuine as they were sycophantic. Of course we’ve seen really small PCs before but compared to the mini these look very, well, depressingly PC like. 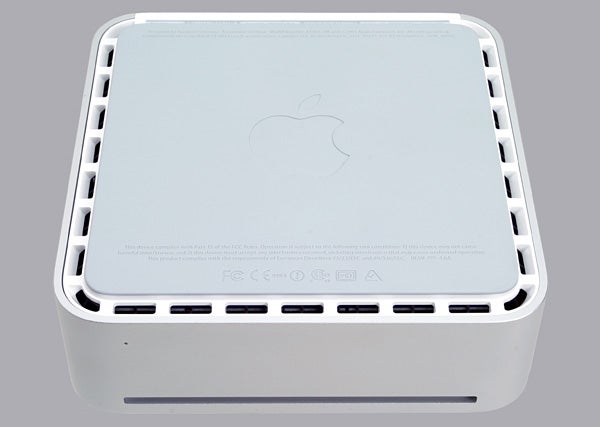 Another demonstration of the desirability of the product was when I brought the review sample into the office for the first time. Everyone wanted to look at it, pick it up and take it home. This included a visitor we had in that day who happened to work for nVidia. When it was pointed out that the mini was powered by ATI graphics he declared, “I don’t care. I want one!” He shall, of course, remain nameless. 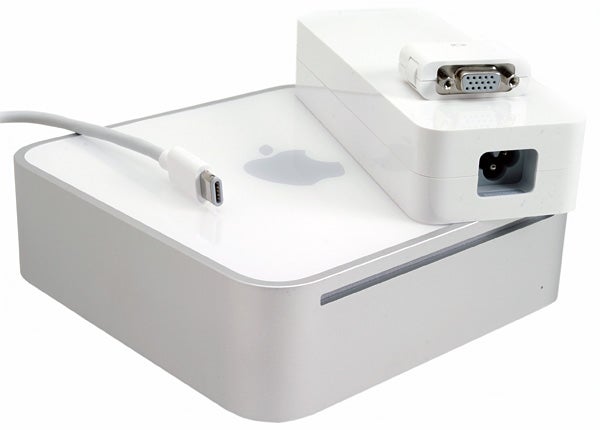 Unboxing the mini is as pleasurable as with any Mac product, with its neat and tidy packaging that amusingly has the words ‘actual size’ next to the product photo. It’s fairly inevitable that the power supply is external, with the block being about one third the size of the mini itself. Even the cabling boasts typically classy Apple build quality with the connectors at each end slotting snugly into their slots, like expensive designer Lego for adults. 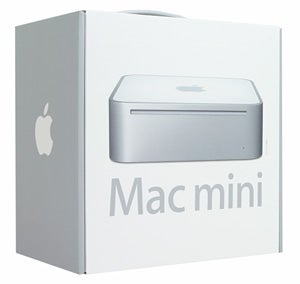 The white finish of the mini is iPod-like and while it looks great it keeps the scratchabilty factor dangerously high. However, as ever with Apple products, there are already a wave of accessories available for it, such as this protective case, enabling you to mount it sideways and protect it from damage at the same time.


Spec wise, the Mini contains most of the tech found in Apple’s current iBook line. It’s powered by a G4 processor running at either 1.25 or 1.4GHz. A G5 would have been nice but it’s still too hot to run in such a small system. Unfortunately to reach the tempting price point, Apple has made some harsh compromises – the base spec of 256MB of RAM is not enough to really enjoy Mac OS X, especially once users start to delve into what the bundled iLife05 suite of applications can offer. There’s only one internal slot, so any later upgrade would involve throwing away the supplied DIMM and as the mini is not designed to be opened by the user, it’s best to do it straight away. 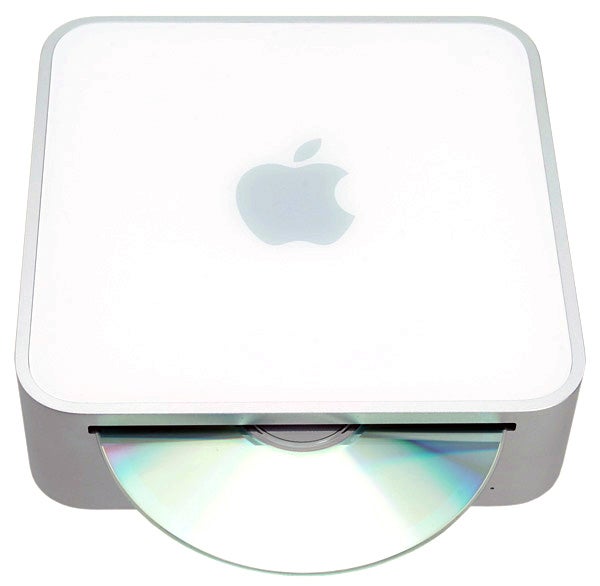 That said the base spec mini still outperformed my own 800Mhz iBook G4 equipped with 640MB of RAM. The mini opened Photoshop in seven seconds, compared to 12 on my iBook. Comparison to a PC’s performance is difficult due to the lack of meaningful cross platform benchmarks. But talking about raw performance is missing the issue. While it’s likely a PC of around the same price might be slightly quicker, it won’t look anywhere near as cool as the Mac mini.


The standard hard disk is also under-specced with only 40GB capacity, which could mean you’ve got the bizarre situation of your iPod photo being fed content by a computer with a smaller hard disk. Graphically things are sped along by an AGP 4X ATI Radeon 9200 with 32MB of DDR SDRAM. It’s fine for everything except the latest games but again that’s not what the mini is about.


Round the back you’ll find a FireWire 400 socket, two USB 2.0 connectors, and a DVI connection that can feed a digital panel up of to 1,920 x 1,200 resolution or an analogue monitor via the included adaptor. There’s also a modem port an Ethernet connection and a headphone socket. The power switch is at the rear and when it turns on the only indication is a tiny LED on the front. The CD combo drive is naturally, slot loading, and the noisiest the machine ever gets is when it’s accessing a disc.

What’s missing is a PS/2 port so while you may want to reuse an old keyboard you won’t be able to unless it’s USB or you get hold of a PS/2 to USB adaptor.


While this review is focused on the hardware, it’s worth mentioning the software as with a Mac they are uniquely tied together. In fact the biggest issue for a potential newcomer from the Windows world will be the move to Mac OS X. While there’s a lot of talk of its ease of use, it will involve a learning curve for many. And after a year or so of using both Windows XP and Mac OS there are features in the former than are missing from the latter and it’s not crash proof, whatever you may have heard.

Perhaps of more significance to Mac OS X is iLife05, which may be one of the reasons people want to buy a Mac in the first place. While there are apps that do similar things on the Windows platform, none can offer the ease of use, the features and the tight integration of this suite of apps. You can edit widescreen footage in iMovie using music from iTunes as your soundtrack, and pull in images from iPhoto and then send it all to iDVD, an app for which there is no real equivalent on the PC. However therein lies a problem – the standard mini only offers a combo drive, so you’ll have to add another £70 to the price for a DVD Burner, which Apple refers to as a ‘SuperDrive’. And if you’re serious about making DVDs you’ll have to go for more RAM, and possibly an external hard disk drive for storage. And you can then add a USB hub so you’ve got enough ports to plug it all in.


If you want to enjoy Apple’s wireless mouse and keyboard you’ll also need to include Bluetooth at time of purchase, and the integrated Wi-Fi isn’t standard either. And we haven’t even mentioned speakers, nor the fact that you still need to provide a keyboard, mouse and display. 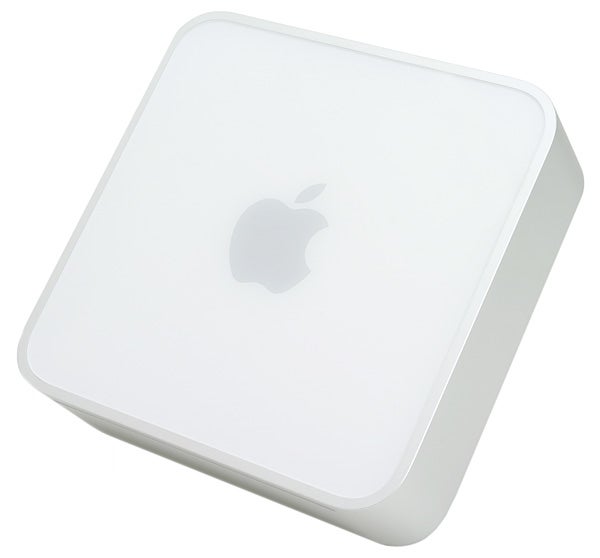 As you can see it all mounts up, revealing the £339 price to be no more than a headline to get you into the shop, with the hope that your wallet will loosen once the mini’s sheer ‘wantabilty’ has got you hooked.


In fact, once things start to add up the cost of the mini starts to creep dangerously close to an entry level iMac, which of course gives you a screen and a more powerful G5 processor.


However, if you specifically want a PC without a display, say as a quiet media server, the mini is perfect. Alternatively, for those looking for basic tasks such as web browsing and email, the mini fits the bill perfectly, especially as it’s free of the vulnerabilities that afflict Windows PCs.


If you’ve ever seriously considered entering the world of Macs, this is the computer that will make you cross over the edge. Forget the bargain basement entry level price – you need more RAM and a DVD Burner to make the most of this machine and you also need to BYOKM (Bring Your Own Keyboard and Mouse).


If you’re cool on Macs, the mini will start to warm you to them, but for those already tempted, we heartily recommend it. If the PC user is a Neanderthal and the Mac user the evolved sophisticate, the Switcher Man, hovering between them, is the missing link – and the Mac mini will be his weapon of choice.

Many thanks to MR Systems, your friendly, neighbourhood Mac reseller, for loaning us a Mac mini for review. If you want to buy a Mac, MR Systems can offer you a bespoke personalised service, which has got to be preferable to buying from a crowded Apple store. Contact Len Borg directly on 020 7697 2214.