As much as Microsoft Office is considered the de facto standard for its category of application suites, it isn’t actually the one we’d recommend everyone buy. Which is why Apple continues to offer regular updates to iWork, its package of office productivity programs.


As our various office tutorials attest, there are layers upon layers of functionality buried inside the various Office programs that most users will simply never find.

The problem with this, as mentioned in our Office 2007 review, is that when so much of that capability goes unneeded and unwanted, paying for it can deter some would-be buyers and leave a sour taste in the mouth of those that do stump up.


The raison d’être of iWork, then, is to offer an alternative to Office for Mac for those users that don’t need the power under Office’s surface. And, importantly, iWork also offers this substitute at a more attractive price point than Office. It’s a methodology that has paid dividends in the past – iWork ’08 striking us as a particular success.


Apple unsurprisingly claims its latest iteration of iWork is its best yet, with numerous advancements in Pages, Numbers and Keynote over last year’s version. Some of these probably won’t be of much use or interest to many users. There are a few, though, which really made me wonder: “how has this not been thought of before?”

iWork’s answer to both work processing and desktop publishing, Pages still holds its own against Word. Fundamentally everything that made Pages ’08 great still applies to this version as do a few of its foibles. The built-in dictionary, thesaurus and Wikipedia look-up interface is as useful as ever, the lack of an autosave feature just as frustrating – to give but two examples.


The most obvious addition in this ’09 version of iWork is Full Screen mode. This, as the name suggests, takes the active page and spans it to fill the screen and blacks out the background providing a clean, distraction-free typing interface. 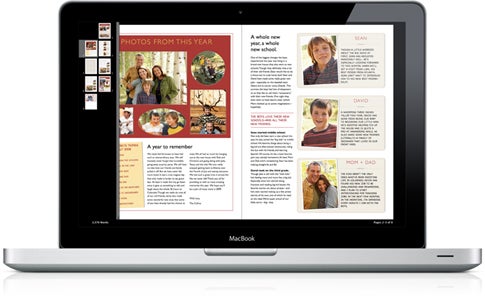 Move the pointer to the top of the window and the full toolbar, including text formatting options, appears, move to the left and page selection thumbnails appear while moving to the right brings up a scroll bar. At the bottom sit page and word counts; the latter particularly useful and which simply refuse to work for me in Word’s full screen mode.


Finally, it’s possible to change the background colour in Full Screen mode. I’d advise against white, though, as it leads to the disconcerting appearance of text floating by itself in he middle of the screen. The only slight annoyance is that using the Inspector – from within which most document customisation is carried out – doesn’t feel particularly streamlined. That’s hardly a deal breaker though.


Dynamic Outlines are another feature making their debut in Pages ’09. Outlines provide a neat way of laying out documents which rely heavily on sectioned groups of text. Using the tab key to progressively demote text through what Pages calls levels, each topic group can simply be typed out, and the appropriate formatting is automatically applied when Outline mode is exited. It’s much more efficient than messing around manually formatting all the headings, subheadings and body text font styles in a document once typed. 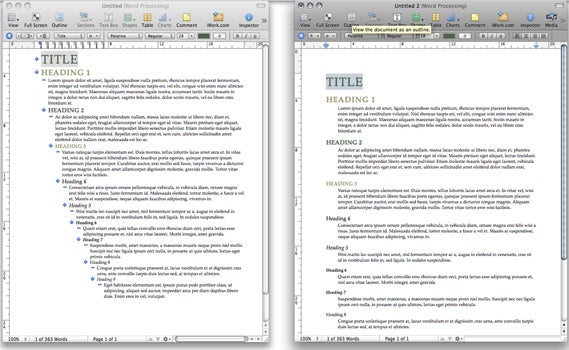 To further facilitate quick navigation of large bodies of text, these levels can be selected and body text therein truncated to show only the first line. This helps with the ability to quickly format documents in outline mode by dragging topic and sub tropic groups around the document, bringing all sub-levels with them.


Dealing with media items in this view mode is also made much easier thanks to the option to toggle thumbnail views of images. For Outlines to be of use also requires some foresight when starting a document to realise it’s going to be complicated enough to warrant their use as applying such formatting mid-creation isn’t particularly simple.


Mail Merge functionality is expanded to enable data from Numbers to be pulled into Pages documents before sending. Combined with a bunch of new and improved templates, this makes for easy creation nifty documents with minimal effort.


A pretty niche addition is native support for embedding EndNote and MathType into documents. I’m sure there are a few mathematics and English students who’ll find such integration useful.

Numbers still maintains its slightly strange way of dealing with spreadsheets. Unlike Excel, which remains fundamentally an out-and-out number crunching program, in Numbers tables are dragged onto the workspace and can then be related in various ways.


When it comes to powering through maths, both methods have their advantages and there’s nothing wrong about either, but for the casual user I think Numbers has the advantage.

That’s an opinion reinforced by the improvements made to formula writing in Numbers ’09. The Formula Browser, features some 250 functions, all with excellent explanatory text and some even offering embedable examples. This allows for easy creation of complex spreadsheets, although most users should find a pre-made template to cover their needs anyway. 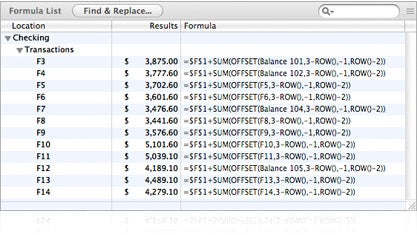 Formula list view could well prove useful, oddly enough showing a list of every formula used in each spreadsheet. These can be searched through and there’s a find and replace option, too. Also added are table categories, enabling quick grouping of similar data into collapsible sets.

Linked charts, a stalwart of Office, make a showing, meaning tables and graphs embedded into Pages, Numbers or Keynote documents can be updated as and when needed from Numbers, with the change showing in any document that spreadsheet is embedded into.


Unsurprisingly for a Mac-centric program, Numbers ’09 boasts more whizz-bang 2D and 3D charts that you could shake a large stick at. Mixed charts are a great addition, allowing multiple data series to be displayed on the same graph for easy comparison; say your 2008 to 2009 profit predictions, versus the actual results. Trend lines and error bars can be also be added and, of course, there are myriad options for making said graphs look pretty.

Keynote ’09 is probably the application where changes are least obvious. In fact, the biggest addition isn’t even part of the program itself, but rather one for the iPhone and iPod touch – the aptly named Keynote Remote app.


Don’t think I’m complaining, though, because I’m not; Keynote Remote is quite simply brilliant. Rather than acting as a simple dumb trigger between slides, the app enables viewing not only of the current and next slides in landscape mode but also supporting notes for each slide in portrait. This, as with the iTunes Remote application, communicates with your Mac via Wi-Fi, so does require an existing wireless network, but provided you have this it’s a great way to present without being beholden to your notebook. 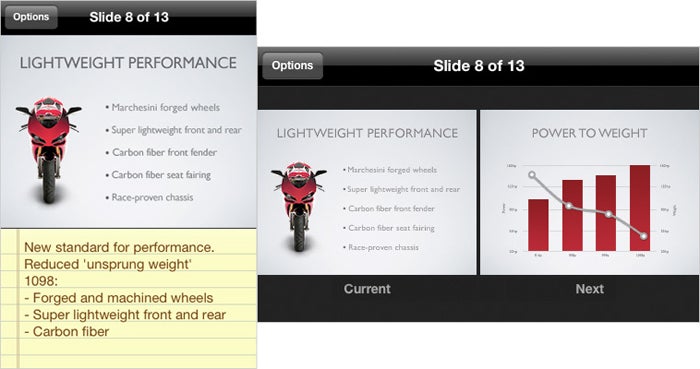 Keynote’s other enhancements are largely superficial. Even more themes than previous versions, displayed via an enhanced browser take a fair bit of effort out of creating a slideshow, and once created jazzing it up is as easy as pie.

The new Magic Move transition is my favourite. Where two adjacent slides have the same object on them, say a company logo or a subject heading, in different places Magic Move animates the change from slide to slide. As simple as it sounds, it can create some pretty funky effects such as, as demonstrated at the MacWorld iWork ’09 announcement, shuffling a deck of cards. Gratuitously fun? Yes. Useful? Debatably.


3D animated charts are also add some visual stimulation to what could otherwise pose dull subject matter. And, as already mentioned, these can be embedded from Numbers spreadsheets.


Admittedly none of these animation effects will totally compensate for boring subject matter, but if nothing else presentation creators will find their jobs that bit more satisfying and for those working in creative industries the extra flexibility over Office’s more mundane appearance will prove particularly appealing.


One addition which is present in all of iWork’s applications isn’t exactly built-in. Instead, it comes as an ability to interface with Apple’s answer to Google Docs and Microsoft Office Live, iWork.com – currently in beta.


Documents from Pages, Keynote and Numbers can be uploaded to iWork.com either for access by their uploaded from another location, or to facilitate others making a contribution to said files. Viewers can either add comments online, or download the files to make changes themselves. 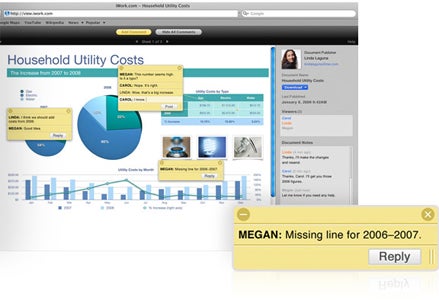 Format support is the same as all other iWork sharing offers, with iWork, Office and PDF documents all sharable. There’s a simple but effective interface showing which documents are shared and with whom, from which usage rights can be changed or revoked.


As beta software it’s hard to be that evaluative of iWork.com, but the early signs are good.


Unlike the transition between Office for Mac 2004 to 2008, or even iWork ’06 to ’08, the latest update to Apple’s productivity suite does feel very incremental. Keynote’s improvements are all superficial, Numbers doesn’t really add any features most users will notice and Pages is frankly just a bit more Word-y.


That the improvements brought by iWork ’09 are minor, though, is really a testament to how good its predecessors were, not a slight on the package itself. The changes are at least enough to make the upgrade feel warranted, rather than an obvious attempt to fleece upgrade-aholic customers out of their cash. 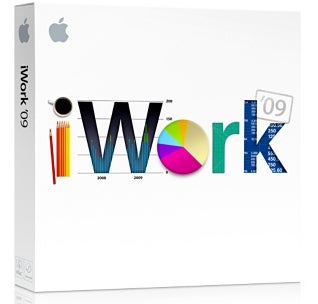 Apple is asking £69 for single iWork ’09 license, versus £80 for Microsoft Office for Mac 2008 Home and Student Edition (the one anyone in their right mind would buy). And that poses a problem.


Office is almost negligibly more expensive than iWork and it’s the more capable office suite. It’s user interface is a little slicker, it inarguably has more power available to be tapped, should it be needed, and there is the inescapable “it’s Office, you have to use Office” factor to consider.


However, iWork is undeniably very good and I defy any casual user to notice much difference, in terms of what they can do, between it and Office. Unless Office’s greater accessible power is needed, the decision is really one of personal preference, not product superiority.


iWork ’09 isn’t that much of an upgrade from its predecessor. However, it remains a slightly less powerful and flexible but nonetheless capable alternative to Microsoft’s application package and is still cheaper to boot.