Though Apple has unequivocally dominated the market for hard disk based audio, up until Steve Jobs’ Macworld announcement in January, it had completely ignored the solid-state market. The reason was simply that up until recently, flash memory was prohibitively expensive, making it impossible to provide a generous amount of storage for a reasonable price. In fact, one of the strengths of the iPod on its original launch was that its hard disk enabled it to hold a far greater amount of music compared to anything else out there.


Recently however, the price of flash memory has come down to such a level that Apple felt that the time was right to bring out a player to market, no doubt bringing a collective groan from all of those companies who up to then had the market to themselves. The result is the iPod shuffle. 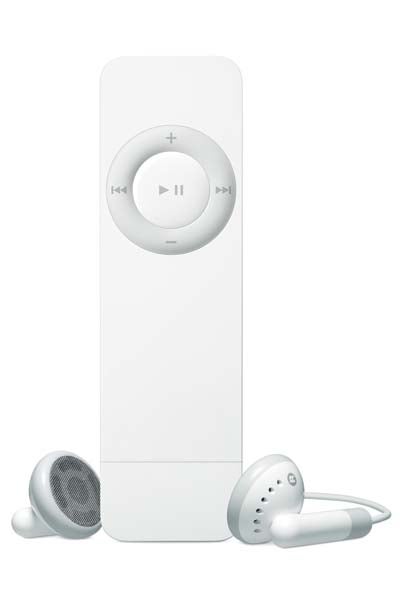 The shuffle is available with two capacities, 512MB and 1GB. Usually Apple’s products are priced at a premium compared to its competitors but the shuffle is actually remarkably good value. For example the (linkout:https://www.trustedreviews.com/article.aspx?art=940) award winning iRiver N10 will set you back £129 for the 512MB version, whereas you’ll only pay £99 for a 1GB shuffle and £69 for the 512MB version. There’s a very good reason for Apple’s price competitiveness. The shuffle doesn’t have a display of any kind. This is probably the most expensive part of any player so it’s only reasonable that Apple is able to price the shuffle so competitively.


Actually it’s no surprise that the iPod shuffle has no screen. Perhaps the biggest strength of the iPod is its interface and though some are better than others, no really small MP3 player has had what I’d call a really good interface. For the average user, trying to navigate these things can be a nightmare, with mysterious words such as ‘Root’ likely to leave them nonplussed. So Apple’s attitude was that if it couldn’t do it properly it wouldn’t do it at all.


Apple boasts that the player is smaller than a pack of gum, and it certainly resembles one. It is 8.4cm long, and a mere 0.84cm thin and incredibly light at only 22g, so you can hang it round your neck it slip it into a pocket without you noticing it.


The design is minimalist in a way that only Apple knows how. Bereft of the fiddly little buttons that festoon other players the controls are laid out in a circle in a manner that is a visual but not functional echo of the click wheel on the 4G iPod. The centre button acts as a play/pause with forward and back to the sides and plus and minus volume buttons above and below. Having the control system easily accessible on the front means that I was able to control the player even with it hidden underneath a shirt, which is useful when you want don’t want to advertise the fact that you have Apple’s latest piece of high-tech fashion jewellery round your neck.


On the reverse is a simple sliding switch, with three positions, shuffle, repeat and off. Below this is a battery power indicator. Press it and a small light illuminates green if it has a good charge, amber for medium and red for low. Beneath this is the Apple logo and the word iPod, with the legend, “Designed by Apple in California” on the base – the word ‘shuffle’ isn’t actually written anywhere.


At the end of the shuffle stick is a removable cap that covers the USB connection labelled either 512MB or 1GB. When plugged in to a powered USB port the shuffle will reach full charge in four hours, reaching 80 per cent of its capacity in two hours. On full charge it will give 12 hours of playback.


As the cap is fully removable it could quite easily be lost, which is something I really don’t like with regular flash memory keys. Considering Apple’s reputation for great design I would have expected a more elegant solution. A saving grace is that another cap is included in the box which has a white neck strap attached to it, and I used this to carry the player around.

So with no screen you may wonder how you navigate the player. In fact your choices are limited to playing tracks purely in the order they are copied over, or using the much hyped ‘shuffle’ feature. The fact that Apple has based its product around its ability to shuffle tracks, is of course, completely ridiculous. In a remarkably clever piece of marketing Apple has taken a feature already offered by probably every single digital audio player ever released and made it the products unique selling point. It’s a move that’s so brazenly cheeky that it almost has to be admired – almost.


As it turned out the lack of screen rarely bothered me but it did on occasion. Sometimes I found myself wondering what the track I was listening to was called but of course there was no way of finding out. And if you want to find a particular track you simply have to keep clicking next until you eventually get to it. The shuffle is clearly not aimed at being used in this way. Rather it’s aimed at those who want to grab some tunes and go, without being too bothered about what’s on there.

You can do this using the new ‘Autofill’ feature in the latest version of iTunes. This automatically fills up the shuffle with songs from your iTunes library and you can choose give preference to songs with a higher rating. This is a quick and easy way of getting your music onto your player and on the 512MB version took just over five minutes to fill it up. Combined with an eclectic music taste, this can make for a bizarre listening experience. Would I have ever have chosen to play Tupac’s California Love followed by Simon and Garfunkel’s ‘Bridge Over Troubled Water’. Probably not, but hey, that’s what the shuffle is all about.


Sound quality was excellent – the same as any other iPod. However, the sound can be a bit bass light. Normally this can be corrected by applying an equaliser preset, but this can’t be done on the shuffle as it doesn’t have any. The now famous distinctive white bud headphones are actually very good quality as far as in-ear phones go but as with every audio device the sound improves if you use a better pair. 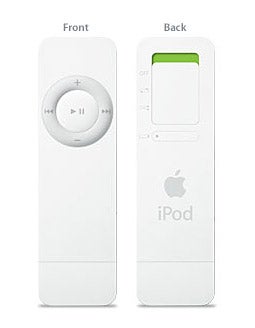 Another use for the shuffle is simply as a storage device, with the drive appearing as a drive letter in Windows. Of course, to be able access music on the go you have to use iTunes to transfer it over. iTunes will also let you specifiy how much of the drive you wish to use for music and how much for data. You can also tell iTunes to re-encode higher bit-rate music to 128Kbps to maximise space on the drive. Apple gives a figure of 120 songs for the 512MB shuffle, but as I prefer to use higher bit-rate songs I was only able to fit 63.


As its competitors pile ever more features into their players in an attempt to dislodge Apple, it goes the other way and makes an even more simplistic player. It’s true that if any other company tried to release a MP3 player without a screen they’d get laughed out of town – but then it wouldn’t look like an iPod.


Ultimately if you’re in the market for a flash based player, what makes or breaks the deal on the shuffle is whether you feel you’ll miss having a screen or not. The absence of one will certainly put off anyone who wants to have control of their music, but by going down this path Apple has been able to offer a serious amount of storage for the price and as ever, the integration with iTunes gives it a step-up over other players. So while it may not appeal to a more demanding user, if you want a second player for the gym or something relatively inexpensive and easy to use for the kids, the iPod shuffle is a good choice. But control freaks need not apply.


Many thanks to the nice people at MR Systems for loaning us an iPod shuffle for review.