Unless you were hiding in a cave last week, you will no doubt have heard about Apple’s latest addition to the iPod range. Gone is the iPod mini, which on the surface seemed like a strange decision. The mini seemed to enjoy a fanatical reception from the millions of style conscious consumers who realised that they’d never fill a 20GB iPod no matter how hard they tried, while the smaller dimensions made it even cooler than the original white icon. In fact when Benny reviewed the second generation iPod mini, both he and I were won over by its small but perfectly formed design, despite the fact that it offered less than a third of the capacity that our 20GB iPods did. However, when it comes to dimensions, the iPod mini looks positively obese compared to its replacement. 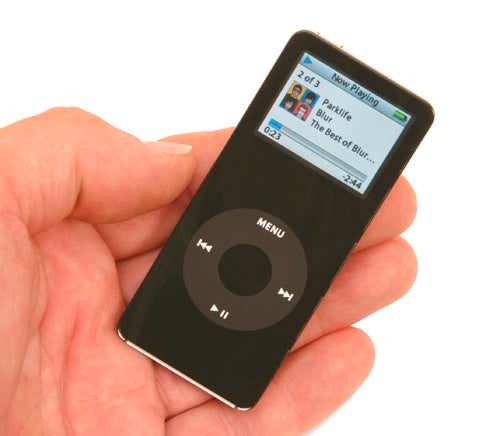 The iPod nano is a triumph of design and functionality. I remember looking at the iPod mini and thinking that Apple couldn’t shrink it any further without losing that legendary iPod usability, but I was clearly wrong. With the nano, Apple has managed to create a positively anorexic form factor, while maintaining the industry leading Click Wheel navigation method. To give you an indication of just how desirable this new iPod is – I still haven’t received a review sample from the PR company, but I was so desperate to review the nano that I actually nipped over to the Apple Store yesterday and bought one!


Let’s cover the most obvious aspect first, the size. According to the trusty TrustedReviews ruler the nano measures 89 x 39 x 7mm (HxWxD), which I’m sure you’ll agree is very small. With a complementing weight of only 42g I can testify that you really don’t even notice it in your pocket – pretty much exactly what Apple was shooting for. 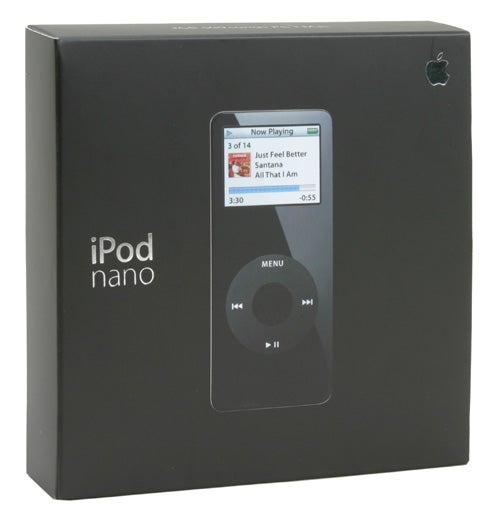 Fans of the rainbow coloured minis will be disappointed to hear that the nano only comes in black and white (sorry Wil, no green for you). Personally I was never a huge fan of the multi-coloured minis, but I did decide to go for the black, rather than the traditional white. The black really does look superb, although I’m sure there are many iPod purists who would only have a white one. That said, at the Apple store yesterday, sales of the black nano were outstripping the white by a huge margin. Of course I wouldn’t rule out Apple launching a few “special edition” colours in the future – there are bound to be enough fanatics out there who would buy another one just for the colour!

The nano ships in two capacities, 2GB and 4GB. I went for the 2GB because 4GB isn’t anywhere near enough for me to store all my music, and besides that’s what my 20GB iPod is for – so my rationale is that you might as well save £40, since you’re going to have to mix about your tracks no matter which capacity you go with. Apple reckons that the 2GB nano will store 500 songs, with the 4GB holding 1,000. Of course how much you actually get onto any device depends on the bit rate at which you record your music and the codec you use. Like all iPods, the nano supports two codecs, AAC and MP3, with the former being the more efficient of the two.


Another plus that the nano has over the outgoing mini is the screen. Although the screen is obviously smaller due to the smaller dimensions of the device, the nano screen is colour. Now you’d think that a 1.5in colour screen wouldn’t be worth the effort, but I was amazed at just how good this display is. Not only will the screen display all the track and artist information while you’re playing your music, it will also display the cover art – just like the iPod photo. 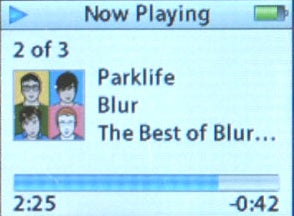 Talking of the iPod photo, the nano is happy to accommodate your digital images, allowing you to put together albums and show friends slideshows to while away boring train journeys. OK, so I’m not sure that I’d be viewing too many images on my nano, especially since it has a smaller screen than my digital camera, but I’m not one to complain about extra functionality.


Below the screen is the traditional iPod Click Wheel, and despite being far smaller than the one you’d find on a full size iPod, or even a mini, it works flawlessly. I have used a great many MP3 players over the years, some good, some bad, but there’s been one constant during that time; the superiority of the iPod navigation system. Many manufacturers have tried to imitate the iPod with varying degrees of success – the Creative Zen Micro did a good job with its vertical scrolling pad – but nothing can compare to the ease of navigation that the Click Wheel empowers you with. 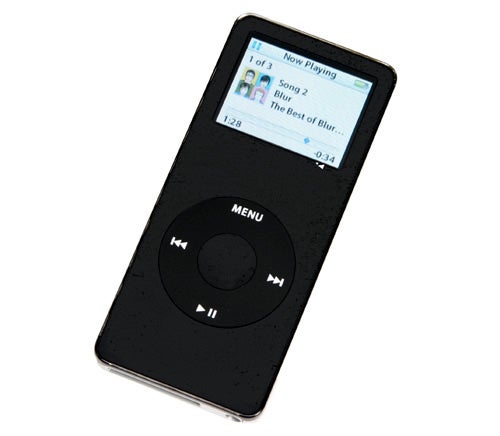 Unlike standard iPods, the top edge of the nano is completely barren except for the Hold switch. The headphone socket is actually hiding on the bottom edge of the device, along with the dock connector. The reason for this is that Apple’s lanyard headphones are secured via the dock connector, so the headphone socket therefore had to be next to it. It may seem strange at first that Apple has chosen to hang the nano upside down from your neck, but in reality it makes a lot of sense. With the device hanging upside down, you simply tilt it towards you and navigate as normal – if it was hanging the right way up, tilting it towards you would result in the device being upside down; not the ideal position for navigation.

Thankfully the nano uses exactly the same dock connector as standard iPods, which means you can use your spare cables. Just be aware that the nano won’t sync via FireWire, although you can use your FireWire cable for charging. Of course the nano isn’t going to fit into your docking cradle, but Apple has covered this point by supplying a converter in the box for this purpose. Also in the box you get a USB docking/charging cable and the ubiquitous white Apple ear buds.


When I’m writing an MP3 player review, it’s usually at this point that I tell you to forget about the bundled headphones and invest in a decent set to get the best out of the device. However, with the nano, I have felt compelled to use the supplied Apple ear buds. Why? Well although I still far prefer the sound from my Sennheisers, with a device as small as the nano, it seems ridiculous to be carrying around a set of headphones that are four times the size of the player! 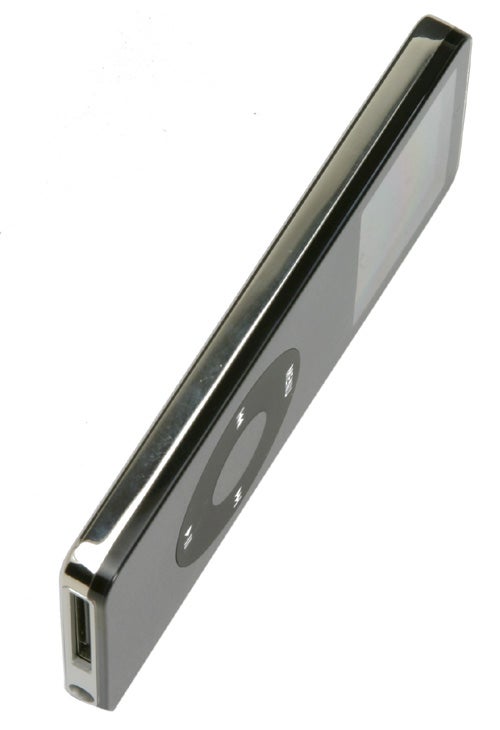 Thankfully the Apple ear buds give a good account of themselves and overall sound quality using them is good. In fact the sound that the nano pumps out is superb, and easily as good as my fourth generation iPod. As long as you’re ripping your music at a decent bit rate, you’ll have no complaints with the audio that the nano pumps out.


Apple quotes a battery life of 14 hours, which is more than adequate for a device that’s obvious purpose is as an exercise companion – if you can manage a workout that lasts more than 14 hours, you’re a much better man than I am.

What’s truly amazing about the nano is that Apple announced it last week, and then rolled out a massive amount of stock into the channel. The Apple store in London was selling them by the bucket load when I bought mine, and I can’t see the demand drying up too soon. 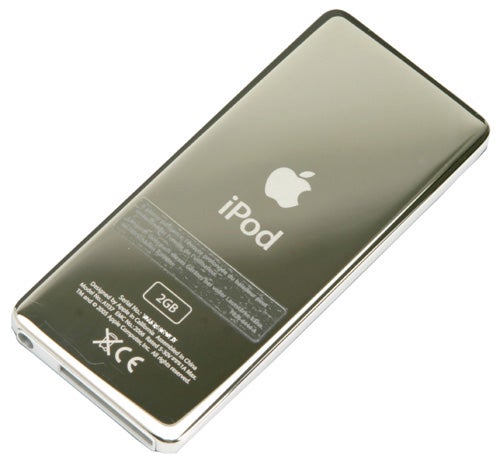 Undoubtedly, part of the attraction is the price, at only £139 for the 2GB version (£179 for the 4GB model), Apple has really thrown the cat among the pigeons in the flash based MP3 player market. You’d be hard pushed to find another 2GB flash based player at this price, let alone one with Apple branding and styling, plus a colour LCD screen! My previous favourite flash based player was the Sony NW-E507, which was slim, stylish and sounded great – but the Sony costs more than the nano, and only has half the capacity and doesn’t sport a colour screen.


Apple has tweaked the Extras menu on the nano too. There’s a world clock now, so if you travel as often as I do, you can quickly find out what the time difference is at your destination. There’s also a stopwatch thrown in which is particularly handy, considering that the TrustedReviews office stopwatch has a habit of hiding whenever I need it. There’s also a screen lock now, allowing you to secure your nano to stop anyone else using it – this is a great feature for stopping your brother/sister/flatmates grabbing your nano and using it when you’re not around!

So, is there any down side to the nano? Only one that I can think of, the lack of a lanyard loop. Obviously a device like the nano cries out to be hung from your neck – despite fitting so snugly and unobtrusively in your pocket, it WANTS to be seen. But there is no way to attach the nano to a lanyard, leaving you only with the option of buying the official Apple lanyard headphones. Of course these headphones don’t come cheap at £25, and even if you were willing to shell out the cash, Apple doesn’t have any yet. In fact the guys and gals at the Apple store had no idea when stock would be arriving, despite the fact that pretty much every customer who bought a nano was asking for them. 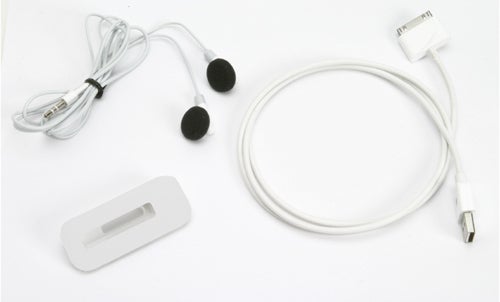 With the inability to hang the nano from my neck being my only complaint, I can’t help but feel that Apple has pulled off a master stroke. Not only is the nano better than anything else on the market, it’s actually cheaper than pretty much any comparable flash based device. If you thought that the competition were starting to catch up with Apple, you’d better think again.


The iPod nano is the kind of product that just makes you stop and stare – anyone that you show it to just wants to hold it and play with it, a bit like when I first showed people my PSP back in January. The nano shows that Apple isn’t sitting on its laurels; instead the company is evolving the iPod and expanding its market appeal. It’s a shame that you have to buy Apple’s own headphones to hang this tiny player from your neck, but that little gripe isn’t enough to rob the nano of an Editor’s Choice award.