It’s well over a year since we looked at the Apple iMac last. Back then it was the first outing of the current aluminium design and it received a glowing endorsement, bagging itself an Editor’s Choice Award. It’s a testament to the quality of that machine that it’s taken so long for Apple to update the range, but it has done just that and we’ve got the 24in version here for your perusal.


Our version is only the entry-level 24in model, but even so its specification is very generous. Directing proceedings is an Intel Core 2 Duo processor running at 2.66GHz. This is backed by a capacious 7,200rpm, 640GB hard drive as well as 4GB of 1,066MHz DDR3 RAM. Both these parts can be upgraded, though Apple is up to its usual shenanigans here by making the 1TB hard drive an £80 upgrade (i.e. the cost of a single drive), while upgrading to 8GB of RAM costs an astonishing £800! It’s just as well few people will need that much memory. 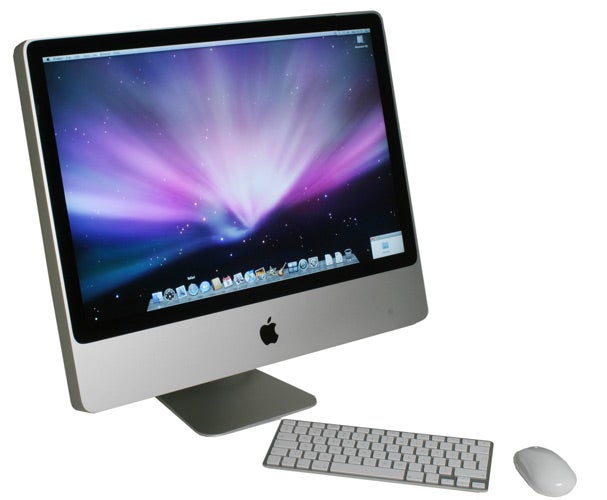 Other standard configurations include the 20in model, which sports the same processor as our version but has just 2GB RAM and a 320GB hard drive, while the other two 24in versions sport 2.93GHz and 3.06GHz CPUs, nVidia discrete graphics and, in the case of the top-of-the-range model, a 1TB hard drive.


At £949 it’s worth noting that the 20in iMac is considerably more expensive than the old one, which started at just £799.99 at launch, but our entry-level 24in, which Apple sells for £1,199, actually looks like very good value given the lack of a cheaper 24in all-in-one – something you can’t say about Apple too often. One can’t help but feel, though, that Apple is trying to compel people to upgrade to the more expensive 24in version in pricing the 20in as it has. 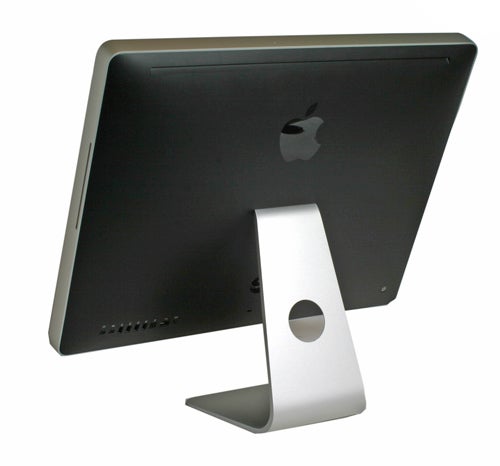 Beyond these newly refreshed configurations the other big change for this year’s iMac is the chipset which, like the new MacBook and Mac mini, is nVidia’s 9400M integrated graphics effort. This is an obvious and positive move on Apple’s part, since it’s more than capable of dealing with most things that’ll be thrown its way (including GPU accelerated applications) and for those that do need more grunt options are available.


Draft-N Wi-Fi and Bluetooth 2.1 also come as standard, but it’s disappointing to see that wireless keyboards and mice aren’t. We can see why some might prefer the wired variety, but it’s hard to escape the allure of a system that would effectively have only one wire (that for power) protruding from it. As it is you have to pay extra for both, though at least neither is extortionately expensive, with the wireless mouse costing £14 and the keyboard £20. 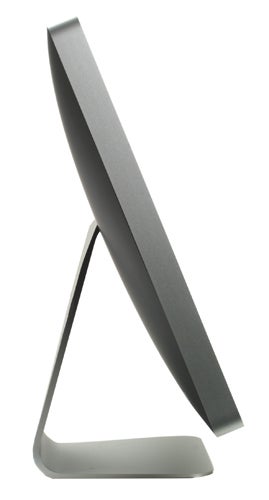 One thing that is included in the price, however, is iLife ’09. This has always been one of the highlights of the Mac experience and, as our iLife review pointed out, that remains the case. iPhoto is particularly useful thanks to the addition of a nifty new face recognition system and Facebook integration, but every element of the suite exudes the usual Apple ease-of-use and comfort. So, given most would probably want to get it with their iMac anyway, we’re pleased to see it aboard.

Having rebuffed the urge to talk design at the beginning of this review, we can resist no longer. Despite the design not changing one iota, it’s hard to get away from the sheer economy and simplicity of the iMac. Its aluminium shell looks and feels sublime and is beautifully counterpointed by the glossy black bezel and the Apple logo below the screen. 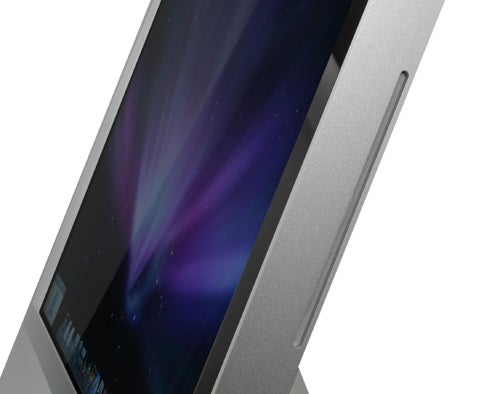 This design flair is matched with unrivalled build quality. One must only tilt the screen to understand this, since the hinge is so effortlessly smooth that the whole machine can be adjusted with just one finger – you can see this even better in the video review. During operation it also remains whisper quiet, while the smooth hinge is robust enough to keep the iMac perfectly stable.


Around the back the seamless simplicity is maintained thanks to the gently arching, smooth black plastic casing and the beautifully integrated power socket – positioned centrally so the cable can be easily routed through the cable management hole in the stand. 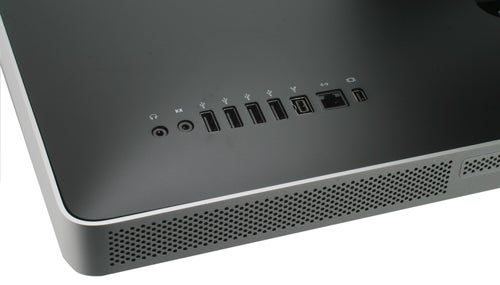 As is Apple’s habit, connectivity isn’t prodigious but it only really lacks the more niche connections like eSATA. As such you do get four USB ports (two more can be found on the keyboard), a Gigabit Ethernet port, a mini-DisplayPort output, FireWire 800 and line-out/in ports for audio. We will re-iterate the usual complaint about the mini-DisplayPort output since it requires an adapter to work with any monitor, but it does support Dual-Link DVI and therefore 30in monitors. Moreover, given this is an all-in-one, it’s less likely to be utilised anyway unless you’re a professional in need of more desktop real-estate or a colour matched monitor.


As for the display itself it is, for the most part, a fine effort. It’s very sharp, bringing out detail in high-definition video very well and producing sharp readable text, while its large desktop area is obviously near perfect for Full HD video – black bars be damned! Colour accuracy is also very pleasing with each step in our colour scales being reproduced correctly. Dark level detail isn’t quite as proficient, but nonetheless pretty good, while the black level itself is good for an LCD and enhanced by the predictably reflective glossy panel.

Our only concern regards some significant banding present in gradients. We struggled to identify this problem in normal usage scenarios and a regular consumer probably wouldn’t bat an eyelid, but in our eyes this rules out the iMac for colour-sensitive work. How important this issue is rather depends on your standpoint. We’d argue that, despite the rhetoric stating otherwise, the iMac is inherently ill-suited to true colour-critical work in normal office lighting due to the glossy finish where reflections can distort the perception of colour. That said, iMac’s are used widely in such circles especially in rooms with controlled lighting where the glossy finish can do its job of enhancing colour saturation and contrast, so the banding is a concern. We’d add, too, that it’s quite possible this is an issue isolated to our sample and unless we looked for it we probably wouldn’t have noticed it, but it is there.

One thing we didn’t really expect from the iMac was decent speakers, but delivers them it does. We’re still not talking high fidelity quality here, but the iMac speakers deliver a pleasing warm and powerful sound that’s suitable for music and film viewing. Dialogue, in videos, is crystal clear and there’s even a little bass to be had, though nothing too raucous.


As noted earlier the iMac doesn’t come with wireless peripherals as standard, but you do get a mouse and keyboard and the choice between a full-size keyboard (with number pad) or the compact version we’ve received. Apple’s peripherals can be an acquired taste, especially for those moving from a PC, but time tends to paint them in better light.

If you’re short on space this is one of the best compact keyboards you’re likely to find since, except the slightly narrower Return key, the layout remains relatively uncompromised. Keys have a decent level of depth and feedback and though the isolated style keys always take a little getting used to, once you do, your typing speed should pick up. We probably wouldn’t recommend it to anyone whose spends all day typing at their desk, but for semi-regular use it’s very good.


We’re less convinced by Apple’s self-titled “Mighty Mouse”, though. Ergonomically it’s reasonable and should, in theory, be completely ambidextrous. This is the case in its three-button configuration, where there’s a single primary button, the centre scroll-ball click (pre-configured to display the Dashboard) and the pinch buttons on the side for Exposé. Yet, in the four-button configuration, where a right-click button is created through pressure sensitivity, the responsiveness becomes very flaky when used left-handed. This is true, albeit to a lesser extent, when used right-handed too, so though it is significantly better than most OEM mice it’s not really up to Apple’s typically high standards.

Our only other criticisms, somewhat typically for an Apple product, consist of things Apple has chosen not to include. Some kind of video input, though hardly essential, would be a nice option, especially when an increasing number of camcorders and cameras feature some variety of HDMI – not to mention games consoles or Blu-ray players.


More crucial, however, is Apple’s continued ambivalence toward Blu-ray. Were we still entrenched in a format war its trepidation would be entirely understandable, but now it just smacks of intransigence, so you’ll excuse us if we don’t whoop and holler if/when Apple finally announces Blu-ray support in some months time as it so often does. Thus, if you do want or need Blu-ray, you do have to look at the likes of Sony, Dell and HP for a Blu-ray equipped all-in-one, albeit one that will cost more than Apple’s offering.


Unlike the Mac mini, whose virtues are more contentious depending on your view, the iMac – particularly in its 24in guise – is an easier sell. It helps that most alternative 24in all-in-one’s are more expensive, largely due to a greater emphasis on multimedia features, but it doesn’t change the fact that the iMac is an iconic piece of design that also delivers as a powerful and – lack of Blu-ray excluded – well featured desktop replacement that benefits from one vital and so far unmentioned attribute: Apple OS X.