Refreshes to the CPU and GPU might not be enough to persuade Apple iMac 2017 owners to upgrade, but the alterations do ensure the iMac remains one of the best all-in-one desktops for creative-minded professionals

Apple’s all-in-one desktops are already the best options for media-savvy professionals. However, a new processor and GPU refresh now puts the Apple iMac 2019 leagues ahead of the competition.

With the option of an eight-core 9th-Generation Intel Core processor, the Apple iMac 2019 is now one of the all-time fastest consumer-level desktops available. The GPU has also seen a sizeable boost with the addition of the AMD Radeon Pro Vega 48, allowing for greater graphical grunt for video editing and design work.

Outside the specs, things remain the same. The gorgeous Retina 5K display is intact, boasting excellent colour accuracy and gamut coverage that will please even the most demanding professionals. Once again, you get to choose between 21.5-inch and 27-inch screen sizes.

The familiar design returns, too – but that’s a good thing. The sleek metal frame should fit nicely in any office space, taking up minimal desk space. It’s an absolute marvel that Apple has been successful in cramming so many high-spec components into such a compact frame.

However, is the boost in specs alone enough to justify an iMac upgrade? If you’re looking for unrivalled power, then absolutely.

Processor speeds should be one of the most important factors to consider when buying a desktop for multimedia jobs. From web browsing all the way up to high-powered software such as Adobe Creative Suite applications, the CPU is responsible for ensuring everything runs smoothly with super-short loading times.

Our benchmark tests show the Apple iMac 2019 has the fastest CPU speeds we’ve ever seen. This isn’t much of a surprise considering the 9th Gen Intel Core i9 processor that can be found under the hood; it’s the most powerful consumer chip currently available. 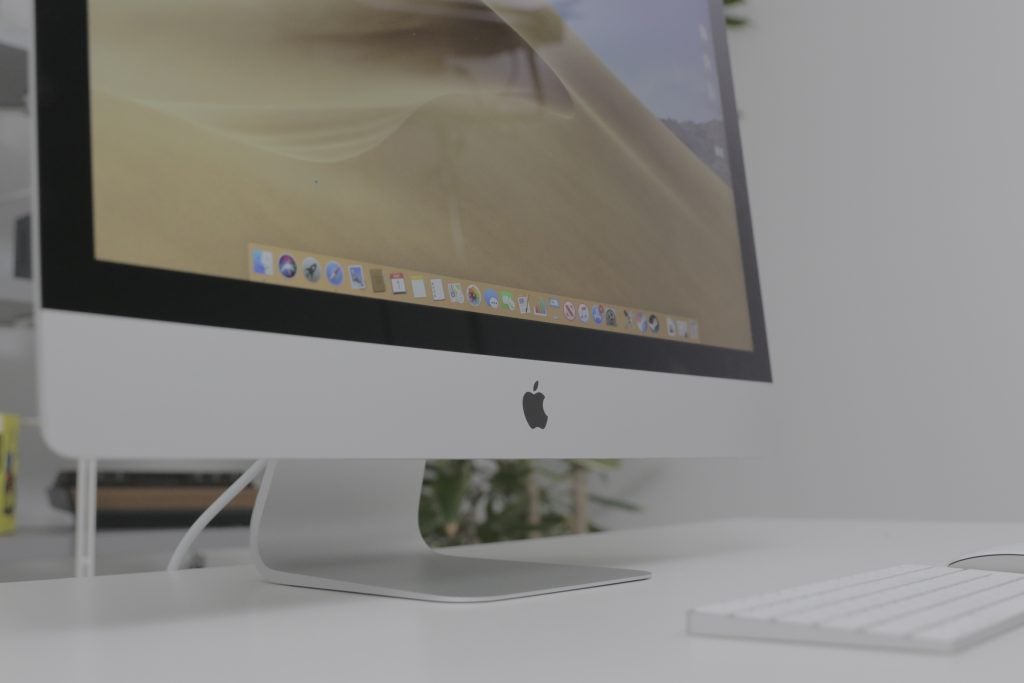 This means Apple’s all-in-one desktop should blast through tasks without hesitation, running even the most intensive software. Clicking through applications, I never noticed any lag – even with multiple browser tabs open.

Of course, no creative-focused desktop is complete without a graphics card. The GPU is needed for rendering high-quality images, so anyone who works with video, animation and complex 3D models will certainly need a high-performing unit. The Apple iMac 2019 offers the maximum configuration option of a Radeon Pro Vega 48 with 8GB of GDDR5 memory, which is very much capable of all of the above tasks.

Again, the Radeon Pro Vega 48 is optional and will cost an extra £405 if you opt for it over the default Radeon Pro 580X with 8GB of GDDR5 memory. You’ll only really make use of the GPU upgrade if you’re regularly working with high-intensity media-editing tools and software.

Storage, too, is a, important consideration for creatives; there’s little worse than running out of space for all your masterpieces. The top-spec iMac comes with a 2TB Fusion Drive by default, and can be upgraded to 3TB. And if money is no issue (we’re talking an extra £990 here), you can instead opt for the 2TB SSD option. Why is this so much more expensive? Having an SSD should boost read and write speeds, so less time is wasted with load and saving times.

The iMac 2019 uses macOS Mojave operating system, which is Apple’s latest software update for desktops. In typical Apple fashion everything is neatly organised, with a big focus on apps. Mojave features include Dark mode, which makes the screen more easy on the eye; and Desktop Stacks, which groups documents and folders together to prevent clutter on the desktop.

If you’re looking for further Apple iMac upgrades, you’re out of luck. The company felt it was only the components that needed an update, which is totally understandable given the quality of the design and display.

The model on review here has a huge 27-inch Retina screen and with a staggering 5K resolution. As such, on-screen images look extremely detailed. What’s more important to media professionals is colour accuracy and gamut coverage. Paired together, these measurements show how the Apple iMac 2019 performs when attempting to accurately display an image so it looks as similar to the real deal as possible. This is obviously important for designers and video editors. 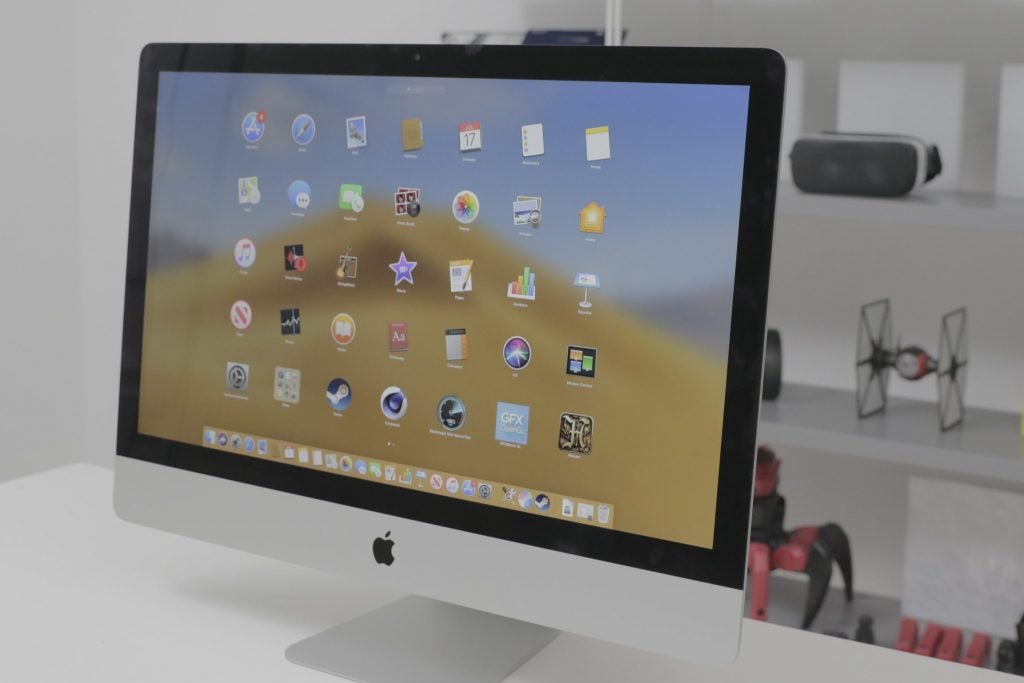 The Apple iMac 2019 excels here, with near-perfect colour accuracy and a massive range of colours on offer ensuring that photographs and images look spectacularly punchy. Apple claims there’s support for 1 billion colours, which is a heck of a lot.

I was also able to verify Apple’s claim of 500-nit peak brightness, which is significantly more luminous than your average monitor. This ensures you won’t struggle to see what’s on display, regardless of the room’s lighting conditions.

Contrast is about average for a monitor, though, but it’s enough to see a substantial difference between dark and light shading. This figure does suggest the Apple iMac 2019 isn’t the industry’s best at presenting dark imagery, but it’s a minor caveat in an overall exceptional display.

The iMac’s appearance is also unchanged, with Apple’s classic all-in-one serving up oodles of style. This form factor makes it incredibly easy to set up: place it on a desk and plug it in; there’s nothing else to it.

The monitor can easily be tilted up and down, allowing for a huge range of flexibility. Importantly, the screen remains sturdy when pushed into place and won’t wobble if accidentally knocked. 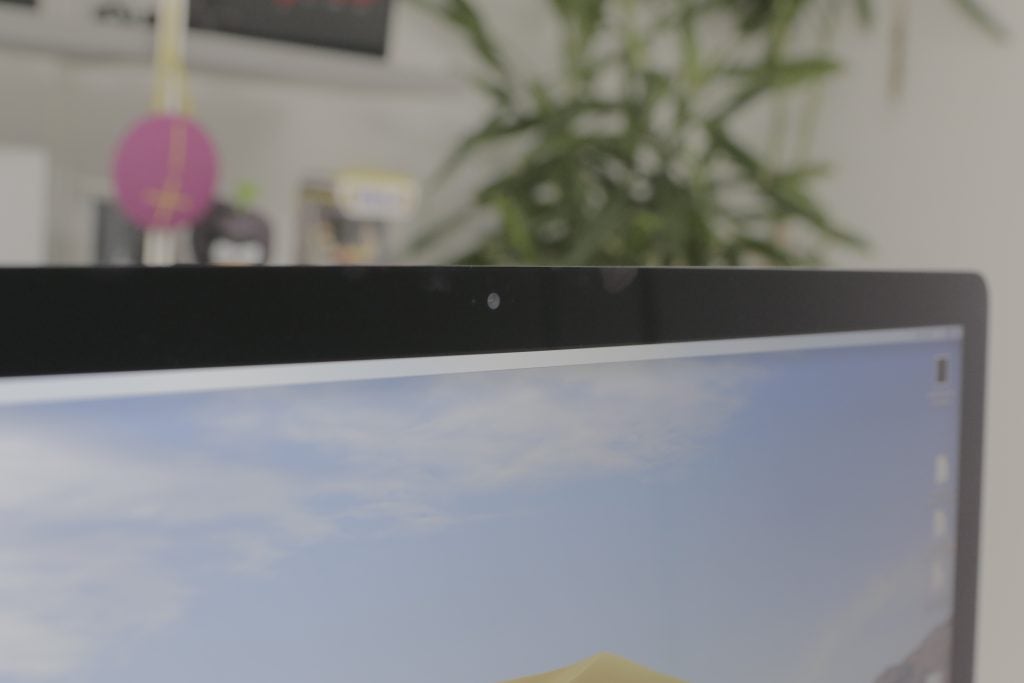 My only criticism of the iMac’s design is that its chunky bezels look outdated in the new age of edge-to-edge screens. I’m not suggesting banishing that iconic logo-toting chin, but I reckon the iMac would look far more suave without the black rim surrounding the panel.

The stereo speakers, situated behind the screen, are suitably loud and offer surprisingly good quality. I played the Godzilla: King of the Monsters trailer, and despite all the roars and high-pitched screaming, the iMac’s audio didn’t sound stretched. These are some of the best integrated speakers you’ll find in an all-in-one desktop.

A HD webcam is discretely fixed to the bezel above the screen. Quality is decent, and easily adequate for FaceTime sessions with colleagues and friends. For crystal-clear video to match your high-resolution display, you’ll need to buy an external one and plug it into one of the ports. 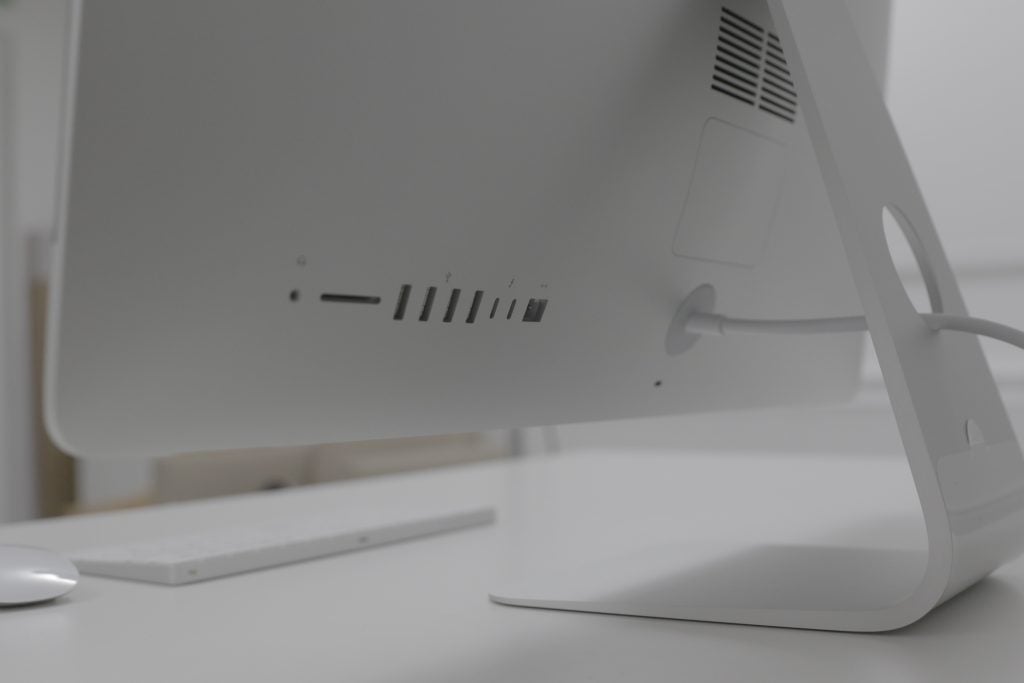 There are plenty of ports on offer with the iMac, which are neatly tucked away at the rear. You’ll find two Thunderbolt 3 (USB-C) ports that can be used to hook up external monitors or connect various peripherals. There are also ports for Ethernet and USB 3, plus a SDXC card slot and 3.5mm headphone jack. Of course, there’s also the power connector behind the stand, which is an elegant solution to hiding the cable.

Included in the box you’ll discover a Magic Keyboard and Magic Mouse 2. The Magic Keyboard is wireless, and can be charged by plugging into the iMac, so batteries aren’t required. It’s super-compact, which may be a pain for users with big hands, but that at least makes it easy to transport. 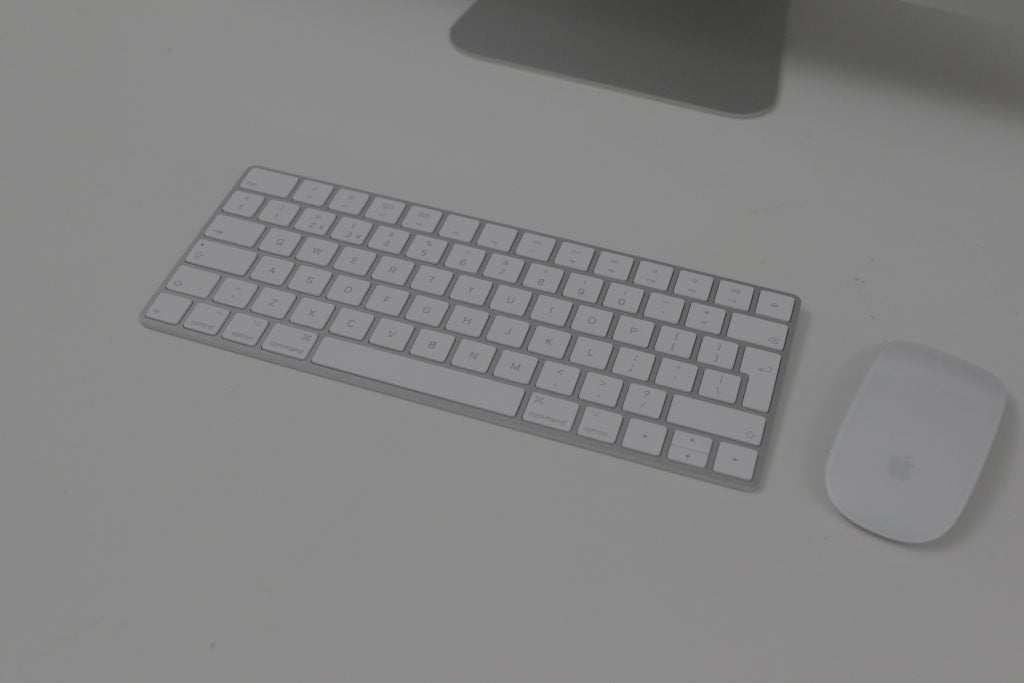 The wireless Magic Mouse 2, meanwhile, has a peculiar design – it’s essentially a plastic slab with an arched back. The multi-touch surface allows for some cool gestures, allowing designers to effortlessly activate their desired tools. You can opt for the Magic Trackpad 2 as an alternative (or grab both if you fancy), but I haven’t been able to use it for myself to comment on.

The Apple iMac 2019 is a refresh rather than an entirely new successor. With the design and screen remaining the same, only the internals have been treated to an upgrade. With performance being the most important factor for a creative-focused computer, that’s no bad thing.

However, if you’re looking to upgrade from the previous Apple iMac, then this upgrade is too minor for most to justify the expense. You’re certainly getting a performance boost with the improved CPU and GPU, but the boosted specs certainly won’t be a game changer.

One the other hand, if you’re a creative or professional whose desktop is now showing signs of age, or simply desire a high-performing computer, then the combination of a dazzling display, striking design and blitzing performance makes the Apple iMac 2019 a creator’s dream come true – as long as you’re happy to ditch Windows in favour of macOS.

The Apple iMac 2019 smashes every criteria for creative professionals including an incredible display, super-speedy performance and a solid design. If you’re happy to switch to macOS, this purchase is a no-brainer, especially with the huge range of configurations.

Refreshes to the CPU and GPU might not be enough to persuade Apple iMac 2017 owners to upgrade, but these alterations do ensure the iMac remains one of the best all-in-one desktops for creative-minded professionals.