Early this year we had a look at the i855GMEm-LFS from AOpen which at the time was one of the first Pentium M motherboards available to the general public. AOpen has now released its second Pentium M board, the i915GMm-HFS. There are some fundamental differences between these two boards, not just chipset features, as AOpen has moved from a desktop board to a media centre type of board. If this is a good or a bad thing depends on your specific needs, but I for one am all in favour for this solution.


It’s really quite amazing how many features AOpen has managed to squeeze in on this microATX board. The i915GM chipset offers a wide range of features on its own and AOpen has built on this to add even more. On its own the chipset provides the integrated graphics, which with the addition of a couple of chips from Chrontel adds DVI and component video output. S-Video is also part of the package alongside a standard D-SUB connector, so you should be able to plug this board into pretty much any type of display. The only downside is that it doesn’t support HDCP, so it isn’t compliant with the new HD video copy protection standard.


The i915GMm-HFS supports both DDR and DDR2 memory, but it’s limited to PC2700 DDR modules due to the fact that Intel never offered PC3200 support in its laptop chipsets. It will however work fine with PC3200 and 4200 DDR2 modules. There will of course be certain performance advantages using DDR2 memory, but as you’ll see from our test results, they are smaller than expected. There are two slots available for each memory type, although only DDR2 offers dual channel support. 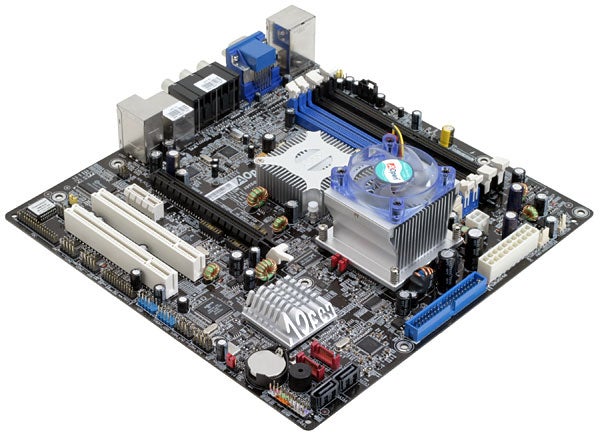 There is one downside to the mobile chipset and that is that it still uses ICH6, which means no SATA-II support. However, AOpen has added a second SATA controller from Silicon Image that does support SATA-II. A further advantage of this is that the Silicon Image controller also supports RAID 0 and 1, something that the Intel chipset doesn’t. With a total of four SATA connectors and a single IDE connector, there are plenty of drive configurations available.


Due to all of the video out options the rear I/O looks rather different from your average motherboard and AOpen has gone for an unusual layout of the connectors. At the top of the board are six 3.5mm audio jacks for the onboard 7.1-channel Intel High Definition audio controller, of which two also double up as optical S/PDIF in and out. Next to the audio connectors are the D-SUB and DVI ports. Moving on we find the component video out as well as the S-Video connector. Then there are two Ethernet ports for the two onboard Gigabit Ethernet controllers – both sitting on the PCI Express bus – and four USB 2.0 ports.

The i915GMm-HFS supports a further four USB 2.0 ports as well as two FireWire ports, but as with the i855GMEm-LFS AOpen doesn’t supply any brackets for these extra headers. As you might have noticed, I haven’t mentioned any “legacy” ports so far. They are still there if you need them, but some of them are easier to use than others. There is a PS/2 header, but AOpen only supplies a keyboard adapter for this, so you can’t use a PS/2 mouse. You get two different types of blanking plates with the PS/2 port, one full size and one half height, so you can use the PS/2 port in low profile cases. A floppy drive header is also present, but this is a laptop style connector, so it can’t be used with standard cables. However, AOpen provides a floppy drive cable, so there’s no need to panic. A parallel port header and two serial port headers are also nestling at the bottom of the board, but you won’t find any cables for these in the box. Again the parallel port header uses much smaller pins than normal, so you might have a hard time finding the right cable here. 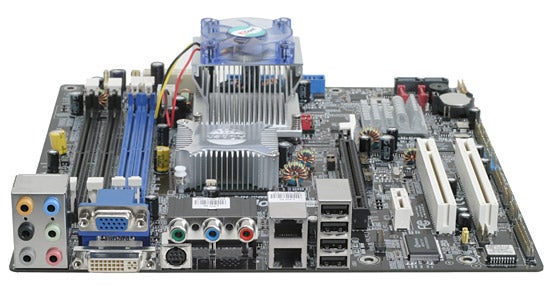 Some other peculiarities of the i915GMm-HFS are four sets of jumpers around the x16 PCI Express slots. These are termination jumpers for the onboard graphics so that the DVI and component video out work properly. You have to remove these jumpers if you want to use a PCI Express graphics card. A further two jumpers are located next to the CPU socket and if you’re using an older 400MHz bus processor, then you have to change these to adjust the bus speed, as the board operates at 533MHz bus by default.


The CPU cooler is part of the package, although installation could be easier. It’s made up of three parts, a rear plate, the heatsink and the fan assembly. The problem is that the spring loaded screws drive into the back plate, which in turn has a set of four nuts fitted to it. Where the problem arises is when you realise that these nuts are loose and can move inside the holes made for them in the plate. This makes it rather difficult to screw it all together and I would’ve much preferred to have the nuts welded to the back plate. The fan is attached to a piece of aluminium that has to be screwed onto the heatsink to complete the setup. 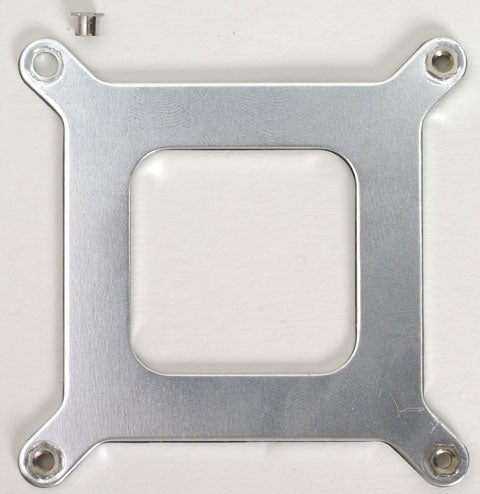 The motherboard chipset is passively cooled by a rather oversized heatsink. Having tested this board with the fastest Pentium M processor currently available, a 2.13GHz 770 part, I was expecting the CPU cooler to get quite hot, since it’s quite small. However, it never even got lukewarm, which goes to show why the Pentium M has been such a successful notebook part. You can add fans if you wish by using one of the two spare fan headers, but the point of this board is low noise.

Apart from the already mentioned cables and headers, AOpen also throws two SATA cables, a SATA power splitter, an IDE cable and two 3.5mm to Toslink converters to be used with the optical S/PDIFs. As always AOpen supplies excellent manuals in colour which makes it a lot easier to locate were things goes. You also get a quick setup sheet, again in colour. 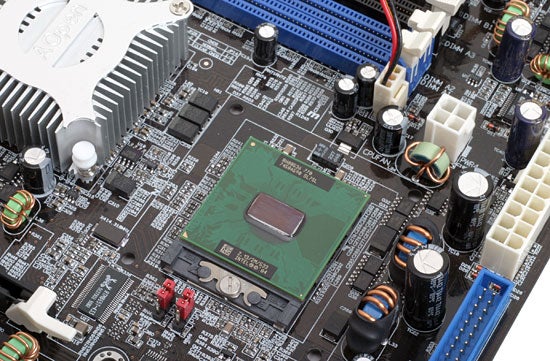 The PCMark 2005 scores paints a slightly different picture, as with the graphics card in place the overall score was 4005 points. Taking the card out this drops to 2182 points and moving to DDR memory again drops the score, this time to 2088 points. For a laugh I decided to run 3DMark 03 and in the same order as the PCMark 05 scores the results were 11811, 784 and 588 points. It goes to show that integrated graphics are definitely a no-go area for gamers, but with a decent graphics card, the Pentium M processors are actually not that bad for gaming.


It is quite hard to score the i915GMm-HFS, as it is a really cool board with a very good set of features. AOpen could improve this by supplying a few more headers and connectors, but that is my only real criticism of the product as such. However, at £150.00 it is quite an expensive motherboard. Add to this that it is almost impossible to get hold of 533MHz Pentium M processors on the retail market and if you can, they’re very expensive compared to faster desktop chips and you can see where I’m coming from. 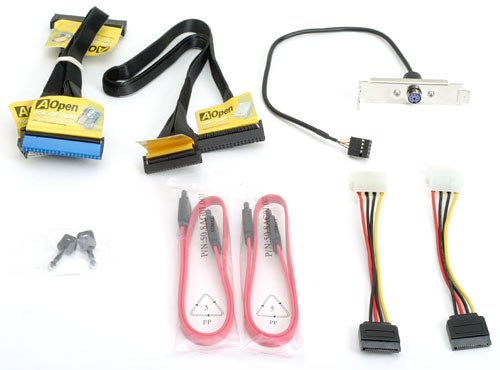 Considering that the CPU we used to test this board would set you back no less than £483.17 you can see that this isn’t the most affordable platform. However, you can pick up a Celeron M 350 for just under £65 which will work just fine with the i915GMm-HFS, while a Pentium M 730 is in the region of £155. Neither will offer the same level of performance, but if you’re building a media centre type device, raw performance isn’t everything. With that in mind, I think that AOpen has produced an excellent motherboard, now all that is needed is the perfect case to go with it – any takers?


AOpen has produced a unique product with the i915GMm-HFS and it is the ideal platform for a media centre type machine. It may be expensive, but you do get a lot of features for your money and with no competition in sight, AOpen might just have found a niche in the market where a product like this will be welcomed with open arms.