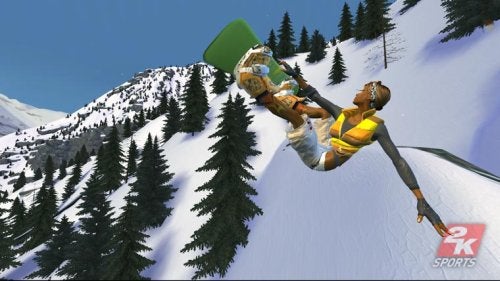 
Here’s a little exercise. Imagine you’re Indie Built, the developers of Amped. Over two Xbox titles, you have carved your fledgling franchise a niche as the snowboarder’s snowboarding game; the game that comes closest to the real feel of board on powder. Sales are good, but you’re up against EA’s SSX, with its casual gamer friendly mix of spectacular high-speed racing and easy-going, trick-happy action. So, for your virgin outing on the spanking new Xbox 360, you decide to turn things around. Will you a) maintain your existing course with a game designed to exploit the power of the console, b) create a more populist hybrid of the Amped and SSX styles or c) go down a bizarre new route that seems hell-bent on alienating both your existing fan base and the SSX camp?


Still, I’m kind of glad that they did. Confession time: I’ve never been a fan of Amped. I could appreciate why real snowboarders liked the titles – these were games made with a real knowledge of the sport and the culture that surrounded it – but I always found them a touch too demanding. While you could pick up SSX3 and just have fun, you couldn’t really enjoy Amped until you’d worked your way around the subtleties of its controls and spent a lot of time going nowhere, often on your bum.


This has now changed. New-style Amped is nice and friendly, with easy to pull off tricks that can be chained together into combos without the ‘catch the mosquito in the chopsticks’ timing of a Zen master. You spend more of your first hour managing impressive mid-air combos and less time tumbling around in the snow, which I’m sure is a good thing. Better still, Amped 3 has managed this without losing its feel. Like Gran Turismo or Waverace 64, it still pulls off that impossible trick of making the movement of a thumb on an analogue stick feel like something completely and utterly different: in this case, the synchronised movement of body and board on ice and powder. It’s just that this time around it’s more fun. 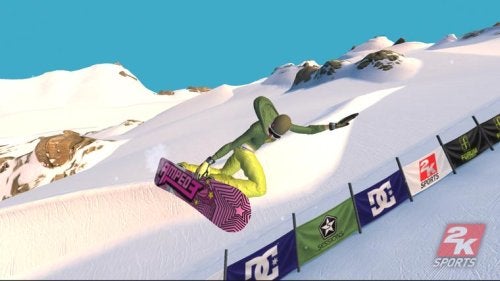 Nor is that the only transformation. Amped 3 still has the old freestyle structure, leaving you free to roam in any area you’ve unlocked, but its major challenges are now tied together in a story. The story itself is a bit clichéd, but the same can’t be said for the way it’s presented, which is – for want of a better word – unusual. Running a lunatic gamut from pastiches of old 16-bit console games to notebook doodles, cod-mysticism, Dragon Ball Z style anime and mock-Soviet game shows featuring an audience of bearded hand-puppets, Amped 3 is downright weird. And it’s almost as if, once the cut-scenes took this style in, it steadily crept out to pollute the rest of the game: challenges might be garnished with a touch of sixties psychedelia, old-school RPG madness, or just some cute kittens who have left a trail of fluorescent litter to clean up. SSX On Tour had its animated notebook scrawl and heavy metal music, but there it seemed like a coating of attitude on a fairly familiar game. Here it feels part and parcel of the whole experience. 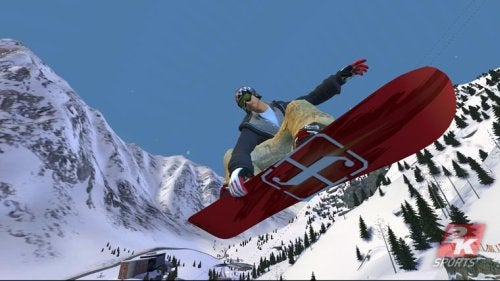 The bad news is that it’s real love it or hate it stuff. If you find the presentation hilarious, then you’re likely to love Amped 3 as a whole. If you think it’s lame, trying too hard or a stain on Amped’s realistic reputation, then repeated bouts of this zaniness are only likely to irritate. Personally, I found it hit and miss, but there were times when I laughed out loud at something stupid, and the game’s desperation to surprise and make me chortle slowly wore away at my cynicism – a game I’d marked down as an underachiever became a lovable underachiever, and that really is a huge difference.


Why underachiever? Well, Amped 2 worked better as a serious snowboarding sim, and in most respects SSX On Tour works better as a casual snowboarding game – it’s more focused, the racing/tricking mix offers more straightforward thrills, and its courses and trick sections are more artfully engineered to entertain. Amped 3 is looser, but then it’s also more relaxed – its freestyle maps give you more scope to just bum around, hang loose, pull off tricks and play to the crowd. In some ways, it reminds me of Grand Theft Auto or that old classic, Pilotwings 64, in that, while you want to work your way through the game, it’s also easy to while away some hours just enjoying its feel and its landscapes. 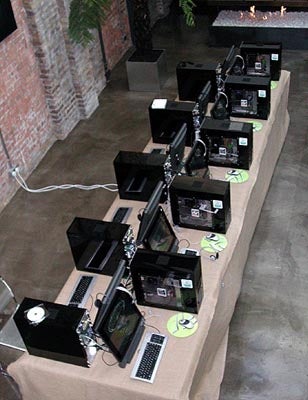 Not that the challenges themselves are ever dull. In some cases you’re just competing with a rival, scoring maximum points in the time available or slaloming through gates, but there are also times when you’ll find yourself deliberately crashing in an attempt to rack up the highest hospital bill imaginable, trailing masked goons up to no good, endeavouring to balance a downhill racing bathtub or performing ridiculous stunts as part of a peculiar product promotion exercise. There are even spots on a snowmobile or hang-glider. You can’t say Amped 3 doesn’t try hard enough.

In fact, there really is a lot of game, with seven resorts, each comprised of multiple runs, and each of these containing a dozen or so of the above challenges, plus media callouts – an evolution of Amped 2’s photo-shoot runs where you may be expected to perform a given stunt for waiting cameras. We’re talking days or weeks of gameplay, not hours. If you play in long stints you may note that the tasks are fairly repetitive, but then that fits in with the overall style. It’s not a game you play exhaustively, complete and put aside – it’s one you kick into, relax, get lost for a few hours and then come back to a few days later. 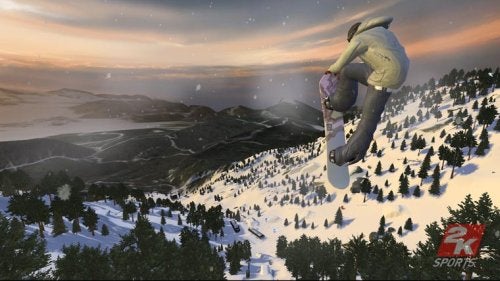 To put it another way, it’s not the hot affair that burns out in a weekend, it’s the mate you chill out with on a quiet weekend. Even the music is built to last – SSX On Tour had the high-profile artists, but after hours on that and Burnout Revenge I was getting tired of the acts on EA’s roster. Amped 3, by contrast, has a soundtrack brimming with US indie no-hopers, yet some of the 300 tracks are growing on me and I’m still hearing things I haven’t heard before. And here’s another indicator of how happy I am to waste time in this game: it’s the first non-RPG I’ve played in ages where I’ve actually spent time customizing my character, adding hats and jackets with a touch of pride, then taking the new look for a spin on the slopes. Really – what more can I say?


Nothing, except to touch on one criticism that Amped 3 keeps attracting: that it doesn’t do enough to show off the capabilities of Microsoft’s new console. Well, the critics have a point. Visually speaking, Amped 3 isn’t a vast, next-generation improvement on Amped 2 – it’s main enhancements come in its gorgeous high-definition clarity, and some lovely textures on the snow, rocks and riders (particularly in the clothes). All the same, the draw distance is incredible, the sense of one immense environment is superb, and the slopes are extremely busy; they’re packed with skiers and boarders, making their own way downhill, shooting the breeze, or preparing to scream at you as you barrel through their ranks. 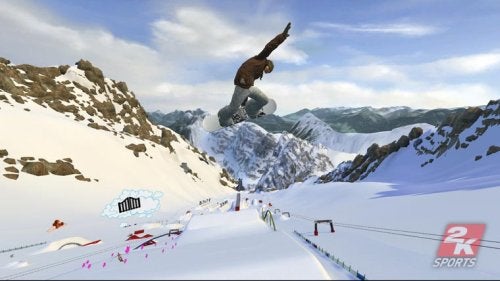 So, if you want gobs smacked go for Call of Duty 2 or Project Gotham 3, but Amped 3 remains a lovely looking, thoroughly enjoyable snowboarding game. It might not please everyone, but if you click with its oddball attitude, it will keep you coming back long after supposedly better games have made their way to the cupboard or second-hand shop.


The loose structure, gonzo humour and less-demanding gameplay might not endear Amped 3 to everyone, but if you click it’s a friendship built to last.