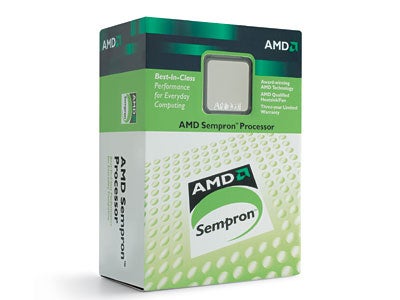 Not quite as soon as we’d hoped, we’ve finally managed to finish our review of the AMD Sempron 3100+. So what is all the fuss about? Well, the Sempron 3100+ differs from the other Sempron chips since it’s derived from the Athlon 64 family rather than the older Athlon XP, which makes it a much more interesting product.


The Sempron 3100+ does however lack 64bit support, so don’t expect to be able to run 64bit Windows XP on it when it arrives. On the plus side, AMD has kept the support for EVP or Enhanced Anti Virus Protection, which will at least prevent some viruses from being executed on your PC, but not all. This does however only work as long as you have Windows XP Service Pack 2 installed.


First of all, let’s clarify a few things; the Sempron 3100+ is only available for Socket-754 and not the newer Socket-939, which seems strange, especially when you consider that AMD will move all its Athlon 64s to the new platform. This means that anyone who has invested in the Socket-754 motherboard will only be able to get Sempron processors for it once AMD discontinues the Athlon 64 for this platform. 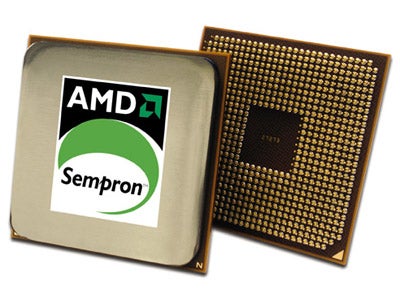 What doesn’t make sense is that Socket-754 will be kept alive for AMDs budget range, as it must be more expensive to have yet another product line. A wild guess would be that the Sempron would perform better with dual channel memory and AMD is trying to prevent it from competing with the Athlon 64.


The Sempron 3100+ and its future replacements will also be kept at 800MHz HyperTransport bus, rather than the 1GHz bus that the new Athlon 64s are using. This might change in the future with a possible introduction of faster bus speeds for the Athlon 64, but this is pure speculation. One other downside is that the Sempron 3100+ only has 256KB of cache, but this is to be expected with a budget processor.


However, AMD is not the first company to try to keep its budget processor range separated from its performance CPUs – Intel used to keep its Celeron processors on a different platform altogether during the days of Pentium III. It seems like AMD has gone down the same route that Intel did with the Celeron, which is a shame for anyone looking to upgrade their PC at a later stage, since now they would have to change their motherboard. That said, if you keep a PC for a year or so, you’d probably want to change the motherboard when you upgrade anyway.


This doesn’t mean that you shouldn’t consider the Sempron 3100+ though, as you can pick up a Socket-754 motherboard for under £60 now. Considering that a decent Socket-A board will save you only about £10, the Sempron 3100+ is far more appealing than the slower Sempron models. Of course you do have to fork out a bit extra for the processor, but the Sempron 3100+ is superior in every aspect to the other models, even if you’re stuck with single channel memory it easily outperforms all the Athlon XP based Semprons.

But enough talk; let’s have a look at the numbers, since this is what really counts when it comes to processors. Looking at general Windows performance, the Sempron 3100+ scored a pretty impressive 146 in SYSmark 2004, this is two points faster than the score we got from a 3000+ Athlon 64 system with similar specifications and 25 points faster than the Sempron 2800+.


Since the Sempron 2800+ was tested with the same amount of memory and the same graphics card and hard drive, we also sourced an nForce 3 motherboard so that the chipsets were also from the same manufacturer. Looking at the PCMark 2004 scores, the one that stands out is the memory performance, which is over 800 points higher on the Sempron 3100+ than the 2800+. The other scores are less impressive and the CPU score wasn’t quite as impressive as I’d expected.


The 3D scores are up, but most of these are dependant on the graphics card rather than the CPU, so I didn’t expect a huge jump here. Nonetheless it does show that the Sempron 3100+ is a better choice for the casual gamer than the 2800+. 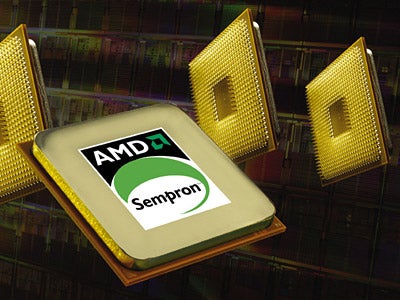 It is not easy to sum up the Sempron 3100+ as it is a decent enough CPU and since we have not yet seen what Intel has on offer with its latest Celeron processors, it’s hard to make any kind of comparative judgement. I would however go as far as to say that the Sempron 3100+ is one of the best budget processors to have hit the market.


There are issues, such as the choice of motherboard platform, lower bus speeds and lack of 64bit support, but this is not unexpected as AMD will want there to be a strong enough argument for the more expensive Athlon 64 chips. As long as you’re aware of these limitations the Sempron is a good choice if you don’t need top notch performance.


The Sempron 3100+ is a good alternative for anyone looking for an affordable PC. It may lack some of the Athlon 64’s high-end features, but for a basic PC, the Sempron 3100+ fits the bill perfectly.