It’s fair to say the first batch of AMDs Phenom CPUs were a bit underwhelming. Though they represented decent value for money, due to AMDs cut-throat pricing, and brought some welcome competition to Intel on the quad-core front, the simple fact of the matter was performance wasn’t good enough for us to recommend a Phenom over any of Intel’s current crop of quad-core CPUs.


Now there can be all manner of reasons why a CPU may not perform as expected, including fundamentally bad design, an inability to run at high enough clock speeds, or thermal limitations, and unfortunately for AMD, it seemed that all but the latter of these problems were plaguing the first Phenoms.


First there was the news of an erratum in the Translation Lookaside Buffer (TLB) that represented a fundamental problem with the design. It wasn’t a big issue for most people as the error only threw up problems in the rarest of circumstances – we ran all our tests on the 9600 Black Edition with the erratum unfixed and encountered no problems. However, if you didn’t want to run that risk, the software or BIOS fixes that were released caused performance to drop by an average of 10 percent. Whichever option you choose though, it wasn’t exactly a good start to the launch.


The other big problem was the fact the early Phenoms simply couldn’t run at high enough frequencies. While Intel is happily hitting 4GHz with some of its CPUs, we couldn’t get our top of the range 9600 Black Edition to run at over 2.6GHz. Regardless of how superior (or not) the Phenom architecture may be, having such a huge disparity in raw clock speed inevitably impacts on performance.


So, with such a dismal first outing, it was imperative AMD could quickly turn around a tweaked design that fixed some of these fundamental problems. Otherwise any hope of remaining competitive with Intel for the next six months would’ve evaporated. 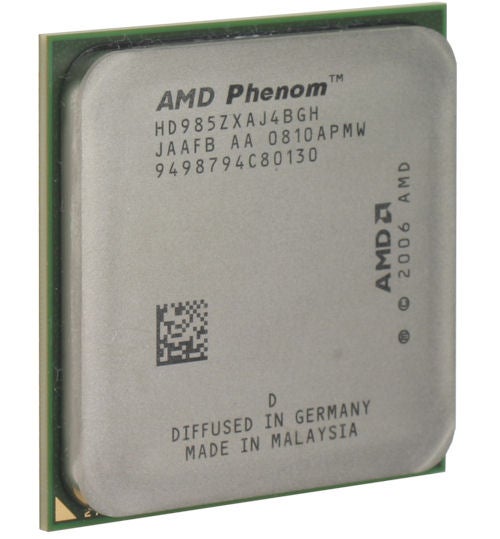 Well, credit where credit’s due, that’s exactly what the boys in green have managed to do and a couple of weeks ago new TLB error-free Phenoms started hitting shop shelves. These new CPUs basically have a hardware workaround for the TLB problem that, unlike the software or BIOS workarounds, has minimal impact on performance. Indeed, AMD expects performance of the new chips to be the same clock-for-clock as the previous Phenoms when run without the fixes.


Labelled the ’50 series’, all the new Phenoms will carry clearly distinguishable model numbers from the previous series of Phenoms. Specifically, where old versions had numbering of the format 9×00, the new chips will be of the form 9×50. Also, coinciding with this rerelease, AMD has thankfully decided to reinstate the ‘X’ in its model names so, once again, tri-core chips will be X3 and quad-core X4. We’re really glad to see the return of this nomenclature – we never understood why AMD dropped it in the first place – as we feel it’s infinitely clearer than just a model number alone.

AMD has understandably decided to completely switch production from the old B2 stepping (the previous 9×00 version) to the new B3 stepping (new 9×50 version) and, because of this, the new CPUs are just as competitively priced as the outgoing ones. Indeed, the 9850 Black Edition we’re looking at today is exactly the same price as the slower 9600 Black Edition it is replacing.


To confirm, then the Phenom X4 9850 Black Edition is AMD’s latest flagship CPU. It runs at 2.5GHz and is manufactured using AMD’s 65nm Silicon on Insulator technology, which gives it a nominal TDP of 125W. The big trick up its sleeve, though, is its unlocked CPU/FSB multiplier that gives it a huge amount of potential for great overclocking. It also has one new feature that is exclusive to the 9850, which is a faster memory controller. All the other Phenoms, old and new, have memory controllers running at 1.8GHz whereas the 9850 memory controller trundles along at 2GHz.

For testing we’ve dropped comparisons to any dual core CPUs as we’ve already seen how these compare. Instead we’ve pitted the 9850 against Intel’s nearest price competitor the Q6600 (which is well known to overclock to 3GHz and above) and the fastest consumer quad-core CPU currently available, the QX9770. Now you could argue that comparing the QX9770, which costs nearly £600, to the 9850 is a bit unfair but, remember, the 9850 is currently AMD’s best so it’s only fair to compare it to Intel’s best.


As always we tried to create as even a playing field as possible so the only limiting factor for each setup is the CPU itself. Both test systems used western Digital Raptor 150GB hard drives and nVidia 8800 GTS 640 graphics cards. However, we used DDR2 memory with the AMD CPUs, while the Intel chips were accompanied by DDR3 and of course the two motherboards for each platform were also different.


Testing started with our usual quartet of Photoshop batch processing, VirtualDub video encoding, WinRAR file compression, and LAME mp3 encoding and we also ran the single core test in Cinebench. These tests are all single-threaded versions of the programs so they are only using one core at a time, which gives a good idea of raw clock-for clock performance of the CPUs.


Next we tested the multithreaded versions of WinRAR and LAME and also ran the multi-core test in Cinebench to see how effectively the CPUs distribute the computing load across multiple cores. Finally, we did a spot of game testing using Counter-Strike: Source, Enemy Territory: Quake Wars, and Crysis. Each test was repeated until a consistent score was achieved so the results we’re showing are truly representative of the performance our test beds gave under our tests. 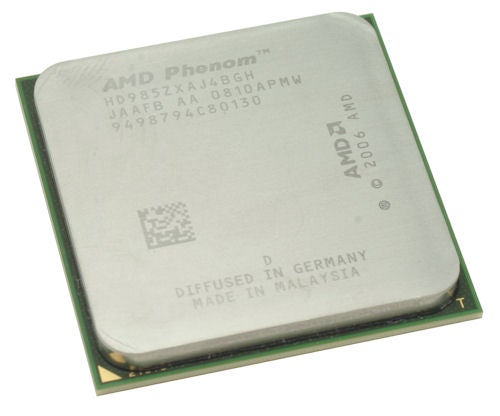 Once the first round of testing was over we set about overclocking the 9850 to see how much head room that unlocked multiplier really gives you.


We started by upping the multiplier and very quickly found we could get to 15x, which gave us an overall clock speed of 3.0GHz with no extra voltage whatsoever – not a bad start! Next we tried upping the HTT with this multiplier setting and very rapidly got nowhere, regardless of how much we pushed the voltages up. So, we started scaling back the multiplier and simultaneously trying to up the HTT until we finally had some success with the default 12.5x multiplier and 210MHz HTT, which was still a long way from our initial successes. So for our testing we settled on the 15x multiplier with everything else kept the same. Still, this is a massive improvement on the overclocking results we got with the first batch of Phenoms.


There is, unfortunately, one downside to all this. Reading around it appears reaching such lofty heights with quite such ease is not a common occurance and, although 3GHz is achievable you’ll have to bump up the voltages to get there. Without experimenting with overvolting, 2.8GHz is a more likely achievement. We’d certainly be interested to hear what results you get, though.


Looking at the results, then, what’s clear right from the off is that the 9850 is a solid 10 percent faster than the 9600 when the TLB fix is disabled. Once the fix is enabled on the 9600 its performance drops by an average of another 10 percent right across the board – the appalling WinRAR results not withstanding. More to the point, though, is that on performance the 9850 is pretty close to its biggest rival, the Q6600. It never quite pulls ahead but, apart from Cinebench, it’s consistently within spitting distance.


All in all, then, it’s a close one to call and really it comes down to how successful you are when overclocking – that and personal allegiances. Although we’re aware the Q6600 is a consistent overclocker, the 9850 is multipler unlocked so there’s potential for significantly more headroom, if you’re persistent, or just lucky.

The AMD Phenom X4 9×50 series doesn’t significantly improve performance over the older 9×00 series, at any given clock speed. However, the TLB erratum has been removed and the new CPUs – especially the multiplier unlocked 9850 – seem to overclock more freely than the old chips. All of which combines to make the 9850, in particular, a worthy adversary to the Q6600. In fact, we’d say it’s close enough that deciding between an Intel quad-core and an AMD quad-core is largely down to personal preference at this price point.