A few months ago AMD launched a series of revised Phenom processors that use the B3 stepping. This revision cures the TLB problem that blighted the original launch of Phenom and also increases the speed that the processor can reach. Phenom X4 9550 and 9750 effectively replaced the original 9500 and 9600 but AMD also added some other models to broaden the product range.


Ed has covered the faster 2.5GHz Phenom X4 9850 Black Edition and also the novel tri-core Phenom X3 8750 but that’s not the end of the story. AMD also recently launched two low power models of Phenom in the shape of the X4 9350e and 9150e. They run at 2.0GHz and 1.8GHz respectively and share most of their features with the other quad core X4 models of Phenom. Namely the 65nm SOI fabrication process, a transistor count of 450 million, 512KB of L2 cache per core, 2MB of shared L3 cache and a 128-bit DDR2 memory controller.


The key feature of the lower power Phenoms is the reduction in Thermal Design power (TDP) from 95W to 65W which is a significant drop in anyone’s book. AMD has made this improvement in heat output essentially by reducing the clock speed, which means a lower voltage and thus less power is required to keep the chip running. AMD didn’t have a clean sheet of paper when it designed the Phenom 9350e. On the one hand it was constrained by the performance of the low power dual core Athlon X2 4850e which runs at 2.5GHz with a TDP of 45W. It was essential that the low power quad core Phenom would out-perform the Athlon X2. 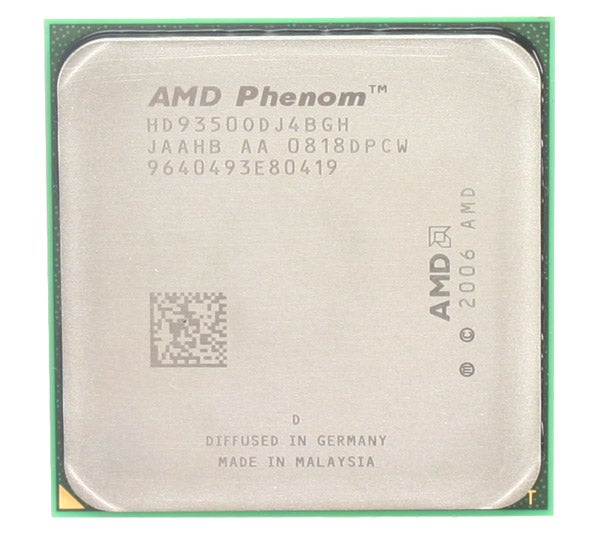 On the other – rather larger – hand we have Intel. The all-conquering Core 2 Q6600 runs at 2.4GHz and overclocks like a dream, and in the process it makes Phenom look a bit silly. To add insult to injury Intel has reduced the price of Q6600 to £125 where it is in direct competition with Phenom. The one thing you can say against Q6600 is that it has a relatively high TDP of 105W. It’s important to be clear that TDP isn’t the same thing as power draw or heat output but instead it’s a worst case scenario for PC builders and system designers. Although Q6600 appears quite juicy you can keep it under control with a modest cooler that is nice and quiet. In our experience a Phenom X4 9750 or 9850 with a TDP of 95W has a similar power draw to Q6600 and requires a noisier cooler.


But that’s yesterday’s news as Q6600 uses a 65nm fabrication process while Intel has shifted to its new 45nm Penryn process. The nearest equivalent to Q6600 is the Q9300 which runs slightly faster at 2.5GHz yet it has a lower 95W TDP. Admittedly the cost is higher than Phenom at £175 but that’s a relatively small detail so AMD has been forced to find a way to differentiate Phenom from the Penryn Core 2 Quad and the result is the low power Phenom.


For comparison, I’ve provided power numbers for our Athlon X2 4850e energy-efficient processor (rated at a maximum TDP of 45 watts). The focus with the new Phenom “e” processors was in keeping the maximum wattage low enough for small thermal envelopes. Please note that future power state improvements may potentially lower the idle power consumption for ”all” Phenom processors.


It so happens that we have both of these processors and were able to make the same comparison. Our power figures are somewhat higher than AMD’s for two reasons. The power supply on our test bench is a hulking great Enermax Galaxy 850W and you can be sure that there are efficiency gains to be made if you select a power supply with a lower rating. The second reason is that we used a Radeon HD 3450 graphics card in our test system. This is a passively cooled graphics card with a low power draw that has very similar capabilities to the graphics core in the 780G chipset on the Sapphire motherboard that we used. Take off 10W for the oversized power supply and 25W for the graphics card and our figures pretty much agree with AMD.


We hadn’t intended to use a graphics card but we ran into problems with the Phenom X4 9350e as it wouldn’t complete PCMark05 when we were using the IGP. The benchmark froze repeatedly during the gaming section of the tests so we plugged in the HD 3450 graphics card and found that it made no difference. Both the Athlon X2 4850e and a Phenom X4 9750 had no problem with PCMark05 so this issue would seem to be specific to the low power Phenom. Once the HD 3450 was installed we stuck with it and that’s the reason why you can’t directly compare our figures with those from AMD. 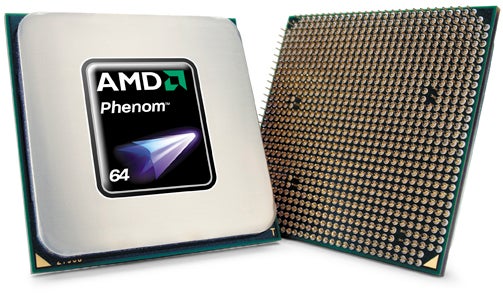 The performance of Phenom 9350e was exactly what you would expect; it’s a slow quad-core processor that performs better than Athlon X2 4850e in tests that are processor-intensive and draws about 20W more than the dual core.


Compared to the Phenom X4 9750 it loses out in every performance test but the power savings under load are significant. This would appear to confirm AMD’s view that ‘… the Phenom X4 9350e is specifically targeted for multi-taskers who want energy efficiency as well.’


‘With a Phenom X4 energy-efficient CPU and 780G as a foundation, system builders and OEMs can design multi-tasking PCs with dual-monitor support and excellent integrated graphics that fit into small form factor power envelopes using a modest power supply for under $500!’


Now we can’t see the market for such a setup being that large as most people will do fine with a dual core processor. That said, if you do run an antivirus program and do a lot of video and photo editing, which you like to do while listening to music and browsing the web, all those cores could come in useful. Moreover, as more and more software begins to take advantage of multiple cores, having four is always going to be preferable to dual core.


The Phenom X4 9350e delivers quad core performance and only requires a modest amount of power, which is great. However, the price is pretty high and it’s arguable that a cheaper, faster dual core will bring more benefit for most people, at least in the short term.