It may come as something of a surprise, being that its Phenom CPUs have been AMD’s high-end chips ever since they launched at the start of 2008, but it’s only with the launch of the Phenom II X4 965 BE that AMD has made its fastest ever CPU. Clocked at 3.4GHz, it finally surpasses the highest mark reached by its dual core sibling the Athlon 64 X2, which was released back in 2007 and ran at 3.2GHz (the recent 955 BE did equal this but not surpass it). Not that Intel is any different, its highest clocked chip was the single-core Pentium 4 570 that ran at 3.8GHz and was around back in 2004.


The point is, over the last few years the focus has been on getting better overall performance and this can be achieved far more easily through having multiple cores rather than having one faster core. Also, processor design has improved so that performance enhancements (even in single core parts) have come without clock speed increases. As such, it’s taken us a number of years to get back to the point where raw clock speed is at the level it once was. That’s enough of a history lesson for now, though. Let’s crack on with the review proper. 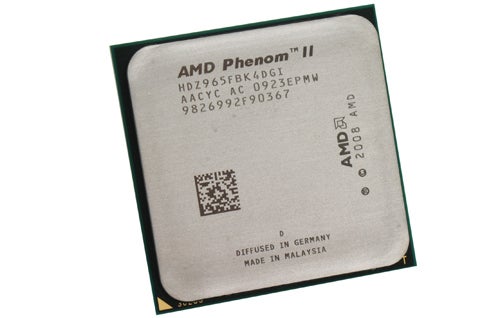 The Phenom II X4 965 BE, then, is a quad core CPU built on the same architecture and manufacturing process as AMD’s previous top dog, the 955 BE. At least that’s how it appears from the outside. AMD has assured us that it has revised its manufacturing process slightly to allow such a fast processor to be produced. However, despite the CPU’s name, this doesn’t seem to have involved any black magic as the predominant reason AMD seems to have been able to achieve such a high clock speed is by increasing the default voltage of the CPU. The 955 BE used a reference voltage of 1.32V whereas the 965 BE has upped this to 1.4V. This might seem like a small change but it does mean the CPU’s TDP has also risen from 125W to 140W.


This is all in stark contrast to Intel’s impending Core i5 CPUs, which use a new architecture and employ new technology to allow better performance without increasing overall clock speed and thus power draw or heat output. Unfortunately, AMD’s next generation of CPU designs aren’t ready yet so it has had to keep trying to push clock speed up to remain competitive with Intel. Until Core i5 actually arrives, though, we can’t say for certain which the better bet is.


Elsewhere the 965 BE’s features are the same as we’ve seen on previous Phenom IIs so if you want the full low down on the architectural intricacies of the chip then check out our reviews of the Phenom II X4 810 and Phenom II X3 720 Black Edition as well as the Phenom II X4 940.


With so little to talk about in the way of features, the last thing to note before we move onto testing is that this CPU is a Black Edition. This refers to its unlocked multiplier which theoretically makes overclocking very easy. As we found with the 955 BE, though, adjusting the multiplier isn’t the only way to effectively overclock a CPU and Intel’s rival chips were able to keep up in the overclocking stakes by adjusting other parameters. We’ll see how this chip fares in a moment.


The 965 BE’s main competitor is currently Intel’s Core 2 Q9550 so that’s the CPU we’ll be concentrating our comparisons on. However, as this is AMD’s fastest chip, we’ve also included results for Intel’s fastest chip, the Core i7 965 (hmmm, coincidental names there). The next closest competitor from Intel is the Core i7 920 and AMD’s second fastest chip is the 955 BE, so we’ve included figures for these two as well.


Starting with our gaming benchmarks, the 965 BE really impresses, clearly coming out on top in the low resolution Crysis test though just missing out to the Intel Q5550 in the high resolution, 1,920 x 1,200, test. It’s a less rosy picture when we look at Enemy Territory: Quake Wars, where the multi-core power of the i7 965 maintains a healthy lead. Nonetheless, the Phenom II X4 965 BE certainly holds its own against other CPUs in its price bracket.


3D rendering has always been a strength of Intel’s processors and while the 965 BE’s increased clock speed closes the gap a bit, our results in the popular Cinebench and POVRay benchmarks show it still has a way to catch up. It’s a similar story in our file compression tests, though the margins are so small that we wouldn’t call it as quite so conclusive. Also, against its price competitor, the Q9550, the 965 BE holds its own.


Looking at mp3 encoding, it’s a reasonably close run thing until we look at the DBPowerAmp batch test. Here, again, the multicore advantage of the i7 processors pays dividends but more importantly the Q9550 doesn’t pull away from the 965 BE.


Our penultimate test is in image editing using Photoshop Elements 4.0. This is a really good test for showing baseline, single-core performance and in this case demonstrates that the 965 BE is very competitive, even against the all conquering i7 965.


Finally, we’ve looked at video encoding performance using VirtualDub (running in single thread mode) and AutoMKV, which is a multi-threaded test. In VirtualDub, it’s a close call between the Q9550 and 965 BE with the latter just coming out on top (but both still trail both Core i7 chips). As for AutoMKV, it’s essentially exactly the same situation. The Core i7’s are simply more efficient CPUs and still the choice if you’re looking for ultimate performance. Nevertheless, the 965 BE is impressive for its price in terms of default clock speed performance. The real question now, is how does it overclock?

We started our overclocking attempts using AMD’s Overdrive utility but very quickly encountered problems. The software was throwing up all sorts of false readings and generally just didn’t seem to be stable so instead we resorted to overclocking through the BIOS.


We started out conservatively, upping the multiplier from 17x to 18x and giving us a total clock speed of 3.6GHz. This was completely stable so we continued onto 19x for a total clock speed of 3.8GHz. This also seemed pretty stable, booting into windows and starting some benchmarks, but after a short while it crashed. We therefore upped the CPU voltage to 1.5V and found this to be stable. Moving further on, we tried 19.5x and 1.55V to give us a stable 3.91GHz, which wasn’t a bad start. 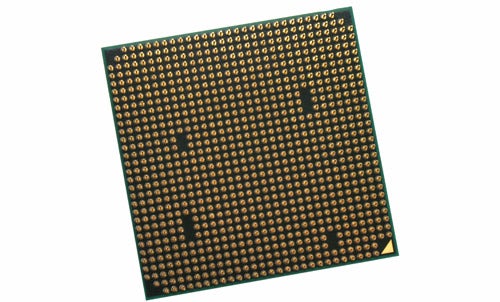 After this we started experimenting more and more until at one point we were able to start benchmarks at 4.19GHz (220MHz x 19) though it quickly crashed. With so many settings to play with we’re confident that this could’ve been made stable but we ran out of time, to really fiddle with all of them and find the right balance, so we settled on calling 3.91GHz our best with this CPU. However, as is always the case with overclocking, the price you pay for more performance is more power consumption. We saw our idle system power consumption rise from 200W to 250W while load power consumption went from 288W to 340W.


In contrast, in our testing, Intel’s closest competitor, the Q9550, overclocked to 3.4GHz, without any extra voltage and these CPUs have been known to push 4GHz with a normal air cooler. However, the sheer ease of overclocking of the 965 BE would make us opt for this chip.


Finally, we come to look at value, and it’s here that the 965 BE really starts to make sense, even considering its middling performance. A decent AM3 motherboard can be had for about £70, while the 965 BE itself is going for about £180 making for a total system cost of £250. In contrast, the cheapest Core i7 motherboard you’ll find is around £140 and the cheapest CPU is £205, making the system cost £345. A Core 2 system does match the Phenom II system for price but, considering that whole platform is being replaced within a matter of months and there are unlikely to be anymore CPUs made for it, we’d avoid plumping for it now.


The AMD Phenom II X4 965 BE is AMD’s fastest ever CPU, in every sense of the word and it matches any CPU available for a similar price in terms of performance. Add in its unlocked multiplier to make overclocking easier and you have a CPU that should be worthy of recommendation. Unfortunately with Intel set to release its Core i5 CPUs in the next couple of months, and with early indications suggesting they’ll be very fast, they may be worth the wait. But if you need a new, affordable chip now, AMD has you covered.