Last month AMD unveiled the worlds first DirectX 11 graphics cards in the form of the HD 5870 and HD 5850 and mighty fine cards they were too. However, priced at £340 for the former and £240 for the latter, they weren’t exactly what you’d call priced for the masses. So, today we’re looking at the HD 5770, which at £120 is likely to fall within many more people’s budgets. Has performance been compromised too much to reach this price point or will this be the pick of the current crop of cards? Read on to find out. 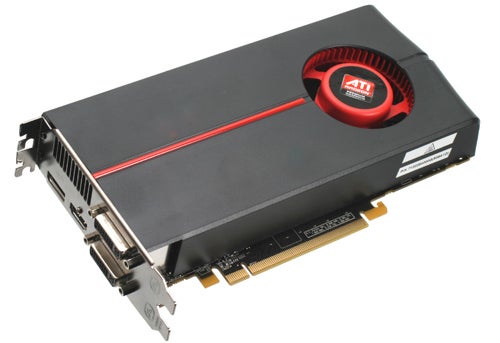 The HD 5770 is a relatively small card at just 220mm long. This means it should have no problems fitting in the vast majority of PC cases, though the double width cooler will limit those with particularly small cases. A major plus point of the double width of the card is that AMD has retained the quad-video output configuration of its more expensive cards. As such, you get two dual-link DVI, a DisplayPort, and an HDMI output but as with the higher end cards, you are limited to just three outputs at once.


AMD’s new black and red livery is continued on this card along with the superfluous extended faux exhausts on the trailing edge of the cooler shroud. We do like the look but still fail to see why these little extended bits are needed – that extra bit of length they add could just make the difference between successfully fitting this card in a case and not. 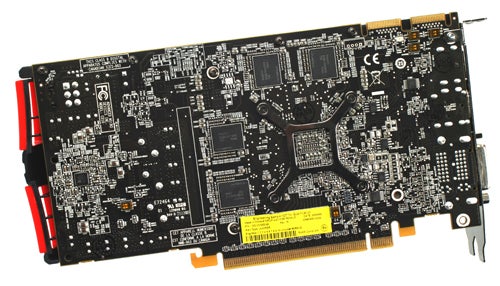 Just one six-pin PCI-Express power connection is required to power this card and AMD’s quoted TDP is 108W, while idle power is just 18W. We will of course be putting these figures to the test later on. Two Crossfire connectors protrude from the top edge of the card where we’ve come to expect them. As always, we’re inclined to recommend you go for a more expensive single-card option than for Crossfire or SLI, due to compatibility issues, but at least the option is there.


The HD 5770 is based on a chip (codenamed Juniper) that is derived from the one (codenamed Cypress) that powers the HD 58×0 series of cards. As such it uses the same basic architecture and technology but just has less of everything. In particular, where Cypress has 1,600 stream processors, 80 texture units, 32 ROPs, and a 256-bit memory interface, Juniper has 800 stream processor, 40 texture units, 16 ROPs, and a 128-bit memory interface. Clock speeds, however, haven’t changed so the HD 5770 really is almost exactly half off the HD 5870 – both cards run at 850MHz and use 1GB of GDDR5 memory clocked at 1.2GHz. 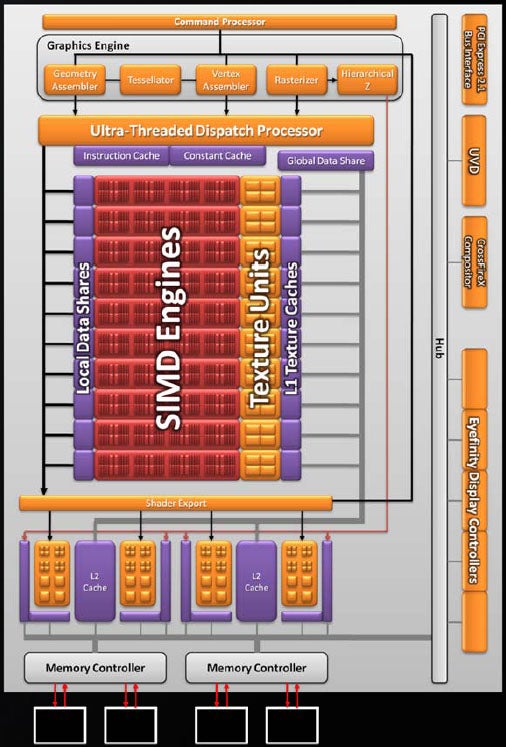 A second card based on Juniper is also available and it comes under the HD 5750 name. We’re not looking at this card today but we’ll get one in soon. Essentially it has had one SIMD engine removed, resulting in a total of 720 stream processors, and 36 texture units. Its clock speeds have also been reduced so the core runs at 700MHz while the memory ticks along at 1.15GHz.


So that’s the card, but for the real meat and potatoes of this review, though, we need to start gathering some numbers so let’s get testing.

We tested this card on our usual test bench, the details of which are below. We ran five games to test for performance then checked total system power consumption and noise levels both when idling and gaming. As always we ran our tests multiple times to try and ensure consistent figures then record the average.


With the exception of Counter-Strike: Source (CSS) and Crysis, the gaming results are recorded manually using FRAPs while we repeatedly play the same section of the game. For CSS and Crysis we use timedemos and framerate recording is automated. For Crysis, all in-game detail settings are set to High while all the other games are run at their highest possible graphical settings.


Meanwhile, power draw testing is done using a mains inline power meter. The idle figure is taken when the system is simply on the windows desktop with no obvious background activity going on. The load test is then taken when running our Crysis timedemo at 1,920 x 1,200 with 2xAA. Likewise, noise levels are tested using the same idle and load scenarios as above. We isolate the test bed in a sound proof box and record noise levels from about 30cm away.


We find that below about 40dB is indicative of a card that when housed in a conventional case will go unnoticed in a relatively quiet home office environment. For use in a ‘silent’ PC (for in the bedroom or cinema room) without resorting to sound proofing your case, you’ll want a card that’s lower than 35dB at idle. As for under load, above about 50dB is a constantly noticeable level that would disturb you if using speakers or open-back headphones while gaming. 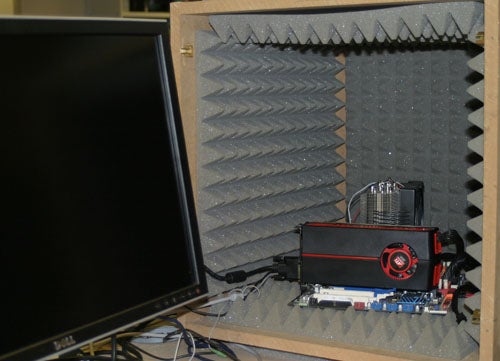 Starting, as always, with Crysis, the most obvious result is that the HD 5770 pretty much holds parity with its key competitors, the HD 4870, GTX 275, and GTX 260. Considering these were last year’s high-end cards, this is certainly a good start, though of course prices for these cards have dropped significantly since then. Sadly this still doesn’t equate to amazing performance, with the HD 5770 achieving just 28.68 fps at 1,920 x 1,200 with 2xAA. Thankfully Crysis is not representative of the vast majority of games and can be considered a worse case scenario.

Far Cry is a game we’ve only recently brought into out testing procedure so we don’t have results for some of the older cards but we’re still able to draw some conclusions. The main thing to note is that the HD 5770 again seems to tally almost exactly with the performance of the GTX 275. As such it’s fair to conclude that the GTX 260 and HD 4870 would have fallen into similar positions and that the HD 5770 competes well.


With the latest Call Of Duty game now available, we’ll probably transition our testing to that game in the near future, but for now we’ve stuck to the old game. The HD 5770 performs very well in this game giving completely playable framerates even at 1,920 x 1,200 with 4xAA. Compared to other cards, it also holds up well, again almost exactly equalling the three price-competitive cards previously mentioned. 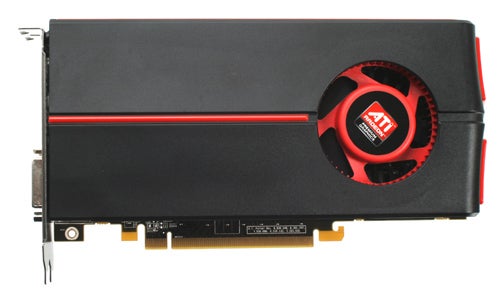 Our penultimate game, Race Driver: GRID, sees a change in gaming style from running and gunning to driving and accompanying this is a change in fortunes for the HD 5770. Here, despite still competing with the GTX 260, it consistently falls behind the GTX 275 and HD 4870. Nevertheless, it still delivers a very playable experience at all the settings tested.


Finally we have Counter-Strike: Source and as we’ve come to expect even this relatively modest card absolutely breezes through this title – at 1,920 x 1,200 with 4xAA, it still gets an average of 149.27 fps. As such, we’ve only reported the highest settings we tested at.


As for the noise these cards produce, well again this is only a test we’ve introduced recently so are missing some cards for comparison. However, we can draw some conclusions. In particular, we can see that this card falls within our level of ‘you wouldn’t really notice it in normal use’ at idle but isn’t so quiet as to be suitable for a ‘silent’ PC. Under load it is just on the cusp of being annoyingly loud but if kept in a well ventilated case, it shouldn’t be too disturbing. 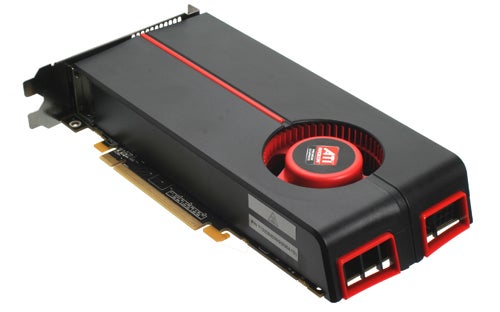 All told then, the HD 5770 has an impressive level of performance for its price, draws relatively little power, and is perfectly acceptable when it comes to noise levels. It also compares well to its price/performance competitors. The GTX 275 is simply overpriced and not worth considering while the HD 4890 is a little bit faster but does cost a little bit more. As for the HD 4870 and GTX 260, they offer almost identical performance to the HD 5770 and cost about the same but they consume more power and have fewer features, so here the HD 5770 is the clear graphics card of choice.


As a mid-range card, the AMD ATI Radeon HD 5770 was never going to set new records but it doesn’t skimp on features and delivers as much performance as we’d expect at its price point.