With the cost of energy increasing almost by the day, the focus on energy efficiency in the technology industry is starting to become more and more prominent. With Intel seemingly back up to firing on all cylinders with its Core 2-based processors, AMD has been playing a game of catch up, as its K8 architecture starts to show its age after over three years of service.


During the later stages of the Netburst era (since the day that AMD’s K8 launched), Intel’s advantages in process technology didn’t matter a great deal to AMD, because the underdog had a better performing and more power efficient architecture. The processor game was a pretty one-sided affair back then – at least, in the enthusiast space – but things changed quite dramatically in that incredibly busy month of July last year.


Not only did Intel launch its first Core 2 Duo processors with incredibly aggressive pricing, AMD cut the price of many of its CPUs in half overnight in order to react to Intel’s massive improvements in both performance and energy efficiency. Today we are looking at one of AMD’s first 65-nanometre ‘Brisbane’ processors, which were quietly announced back on the 5th December. Given the fact that Intel launched its first 65nm Cedar Mill and Presler-based (a pair of Cedar Mill’s on one CPU package) Pentium 4 and Pentium D processors on 27th December 2005, it shows the lead that Intel has when it comes to manufacturing technology.


Manufacturing technology isn’t everything though, as AMD has proven in the past, but with both David and Goliath having relatively good CPU architectures it can play an important part. Reducing the process node usually results in lower power consumption, lower operating voltages and thus, more modest cooling requirements.
(iMAGE:cpu)

While AMD hasn’t promised any notable changes in performance with the process shrink, we’ve put AMD’s new Athlon 64 X2 5000+ EE processor through its paces in our typical selection of benchmarks. Before we get to that though, let’s have a look at what’s new.


Brisbane is quite an important CPU for AMD in many respects, because the company’s next-generation K8L processor is going to be manufactured on the same 65 nanometre Silicon On Insulator process. Between now and the time when AMD launches its native quad-core processor, AMD will work to make the process as mature as possible by the time the new architecture is ready to launch.


According to AMD, the new 65nm G-stepping Brisbane core has the same transistor count as the 90nm F-stepping Windsor core (just shy of 154 million transistors in real terms) that it will eventually replace. As a result of the finer manufacturing process, the Athlon 64 X2 die has been reduced from 183mm² to 126mm² – just shy of 69 per cent the size of its older brother. If my calculations are correct, a perfect die shrink from 90nm to 65nm would make the 65nm part 52 per cent of the size of the same part manufactured on a 90nm process.


The reduction in die size obviously means that AMD is able to get more dies per wafer, however there’s more to it than meets the eye. The chips are manufactured at AMD’s Fab 36 manufacturing plant in Dresden, Germany. This plant exclusively uses 300mm wafers, while AMD’s Fab 30 facility (which is located right next to Fab 36) uses 200mm wafers that have less than half the surface area of a larger 300mm wafer (31,415mm² versus 70,685mm²).


Producing processors using a 300mm wafer is cheaper on a per die basis than producing the same processors on a 200mm wafer. If you take that and the impressive 31 per cent die size reduction that AMD has managed to attain, the company’s cost of producing Athlon 64 X2 processors has just plummeted.


The lower production costs aren’t going to mean cheaper processors though, because the process shrink is designed to increase AMD’s margins and production capacity. This will enable the chip manufacturer to satisfy the demand for its processors, and increase production capacity in the future. I know that the selfish amongst you won’t like that fact because the process shrink is all about earning more money for AMD (rather than saving money for the consumer). As far as I’m concerned though, that’s good for the microprocessor industry – it’s important to have both AMD and Intel pushing technology forwards for the sake of healthy competition.

AMD’s new 65-nanometre processors are all labelled ‘Energy Efficient’, as AMD has managed to lower the maximum thermal design power (TDP) to 65W on all of the new CPUs. This is mainly thanks to the smaller design process, which has helped to reduce the voltage requirements down to between 1.25V and 1.35V.


In the past, AMD has only used integer values for the multiplier on its Athlon 64 processors and there were two different cache sizes throughout its line up. Back in June though, AMD stated that it would simplify its product line, retiring all dual-core processors (except the Athlon 64 FX) that came with 1MB of L2 cache per core. The processors removed from AMD’s product range included the X2 4800+, X2 4400+ and X2 4000+.


However, AMD quietly re-introduced a couple of higher-end Athlon 64 X2s with 1MB of L2 cache per core; namely an X2 5200+ (running at 2.6GHz) and an X2 5600+ (running at 2.8GHz, the same clock speed as the company’s flagship Athlon 64 FX-62). Just to confuse matters a little more, AMD also introduced an X2 5400+ that is also clocked at 2.8GHz, although the difference here is that it only has 2x 512KB of L2 cache. All of these processors are still based on AMD’s 90nm cores, though – the new 65nm Brisbane chips fit into the middle of AMD’s product stack.


Interestingly, the new processors based on the Brisbane core makes use of half multipliers (and all come with 2x 512KB of L2 cache), meaning that we now see 100MHz speed grades in AMD’s product line. This change in strategy also sees the re-introduction of the three model names that AMD retired from its line up in June – X2 4800+, X2 4400+ and X2 4000+ are back.

Currently, the fastest Brisbane processor is the X2 5000+ EE that comes clocked at 2.6GHz – the chip AMD has sent to us – and, aside from the process shrink, performance should be very similar to the 90nm X2 5000+ based on the Windsor core. The X2 4800+ EE, X2 4400+ EE and X2 4000+ EE will present a different set of performance characteristics to the processors that they’ve replaced.


The other thing to consider is the way that AMD’s memory controller derives its memory speed, because it is unable to derive a memory clock from a half multiplier; instead, it uses the next full multiplier value to calculate the memory frequency. This needs to be expanded upon here, because it could potentially confuse a few people.


Because the X2 5000+ EE shares the same characteristics as the 90nm X2 5000+ that it’s destined to replace, the memory clock is derived by dividing the CPU speed by seven because it can never exceed the DDR2 speed set in your motherboard BIOS. Thus, the memory runs at 742MHz DDR on the X2 5000+ EE. Things get a little more complicated with the X2 4800+ EE, X2 4400+ EE and X2 4000+ EE, because they all use half multipliers to derive their CPU clock frequency.


Even though some of these memory frequencies are appreciably lower than the DDR2-800 you’ve selected in the BIOS, we still recommend buying DDR2-800 memory if you’re planning to get the most out of one of these new Energy Efficient Athlon 64 X2s. Things get a little more complex when you reduce the maximum memory clock in the BIOS to 667MHz, 533MHz or 400MHz. We’ll not bore you with the details here though.


To gauge how far our Athlon 64 X2 5000+ EE sample overclocked, I used the same M2N32 SLI Deluxe motherboard from Asus with the CPU core voltage set to 1.45V in BIOS. In addition, I used Zalman’s CNPS9700 heatsink/fan combination with the fan at its default speed setting. I got the chip that AMD sent to us to POST at just short of 3200MHz, but I couldn’t get into Windows at this speed.


I couldn’t get any kind of Prime 95 stability (dual instances) until I lowered the clock speed to just over 3.04GHz using the CPU’s default multiplier and a HTT clock of 234MHz. Here’s a screenshot of where I got to: 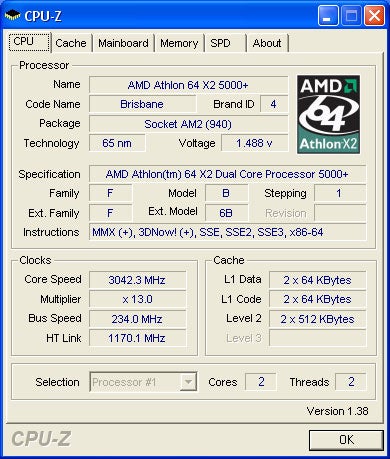 Of course, I must remind you that your own mileage may vary when overclocking and I can’t guarantee how any chip your purchase my overclock.


No matter what we tried, we couldn’t get AMD’s Cool ‘n’ Quiet technology working on our M2N32 SLI Deluxe, so unfortunately, we’ve had to leave power consumption measurements with power management enabled out for the time being. We’ve tried several BIOS revisions, including a couple of BETA BIOSes, and none have fixed the issue for us.

There are some nice improvements in power here, but I suspect that we’ll see more improvements as AMD’s 65nm process matures. The default CPU voltage was 1.36V on the X2 5000+ EE, while the Windsor’s default core voltage was only 1.32V in CPU-Z.


The full details of our test set-up can be found on our sister site, Bit-Tech.net.


As you can see from our results on the following pages, at the same clock speed, AMD’s new 65 nanometre Brisbane core was consistently slower than the 90nm Windsor core it is replacing, albeit only by less than 0.5 per cent, the slimmest of margins. We didn’t really get much of an explanation from AMD about why this was so – the company told us that the processor would perform the same as its 90nm derivative. After further in depth investigations we ascertained that an increase in cache and memory latencies on the new Brisbane cores was causing the minor performance differences.


I can’t help but feel a bit mixed about the first wave of 65 nanometre processors to come from AMD. While the company has done a lot of things right in its transition to 65 nanometres that will be immediately beneficial to itself (rather than to its customers), we can’t help but feel that it’s priced out of the market a little.


The reduction in die size in conjunction with the move to 300mm wafers will enable AMD to alleviate the chip shortage problems it had towards the end of last year, and it will also help it to increase its margins. It has also helped the company to reduce its power consumption somewhat, too. This is probably the only improvement made that is actually passed onto the consumer – every other improvement that we can see is there to benefit the guys in green jackets.


While I believe that’s good for the microprocessor industry, it doesn’t help AMD out of the hole that it appears to be in at the moment. Currently, the X2 5000+’s main competition comes from Intel’s Core 2 Duo E6600 – retail versions of both are priced around the £200 mark in the UK, with the Athlon being slightly cheaper. However, AMD’s problem becomes apparent when you start to look more closely at performance – the E6600 often trades blows with AMD’s flagship Athlon 64 FX-62 processor, and is nearly always faster than the Athlon 64 X2 5000+. Add that to the fact that the 65 nanometre Brisbane chip is actually marginally slower than the chip it is replacing, and AMD isn’t going to get any more competitive.


In isolation, the Athlon 64 X2 5000+ EE is a decent processor. However, simply put, it’s time for a much-needed update to AMD’s K8 architecture. We know that it’s coming later this year, but in our opinion, it can’t happen soon enough. K8 has been great over the years, but AMD just can’t get to high enough frequencies to compete with Intel at the moment. If you’re looking to build a new system then the choice is quite a clear one; unless you already own a socket AM2 motherboard, Intel’s Core 2 Duo processors are a much better choice.