The technology industry loves early adopters and without them there is no doubt the sector would not move at the same jet propelled pace it does. That said sometimes the waiting game does pay off and there are few better examples of this than Amazon’s latest Kindle.


The web giant doesn’t ascribe version numbers to its famous line of eBook readers, but what we have in front of us is the brand new third generation Kindle which is not only the best Kindle to date – but also by far the most important.


Superficially little seems to have changed: there is a tasteful switch from white to graphite and the clunky five way rocker of the second generation Kindle has been better integrated to the right of the keyboard, but it all looks rather familiar. In hand, however, the subtle differences become more apparent. At 190 x 213 x 8.5mm and 247g, the Kindle 3 is both 21 per cent smaller and 15 per cent lighter than its predecessor, the 6in 800 x 600 pixel e-ink display also has a 50 per cent better contrast ratio with crisper fonts while page turns are 20 per cent faster. Amazon doesn’t supply specific figures to back-up these claims, but in direct comparison to the Kindle 2 they are apparent.


What this adds up to is the best eBook reader display we’ve seen. Its 16 shades of grey make it adept at displaying images where necessary and sunlight poses no problems whatsoever. In fact the Kindle is easier to read in bright sunlight than a book since white pages can be prone to glare. Yes there is still a slight delay when changing pages, but the transition is now no more distracting than turning a physical page. The other obvious benefit to e-ink is the battery life with the Kindle able to last up to one month with WiFi turned off – though 10 days seems more accurate with it switched on. Charging takes just three hours. 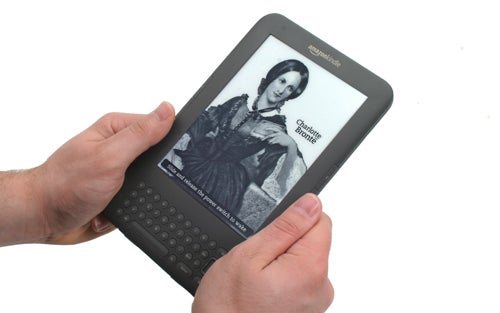 The changes don’t stop there. The keyboard, while still not perfect, has a pleasing texture to the keys which stops fingers slipping and internal storage has been doubled to 4GB leaving space enough for a whopping 3,500 books.


Where things are less rosy are in terms of navigation. It must be stressed: the Kindle is not a difficult device to navigate, there are dedicated menu, home and back buttons and the menus themselves are simple and clearly labelled, but they are also a little convoluted. It would be easy to point the finger here at a lack of touchscreen controls and while they would undoubtedly add a level of simplicity, it would also make users more skittish about accidentally touching the screen. As it stands you’ll find your way around the Kindle 3 without major obstacles, but it is perfunctory rather than enjoyable.

So what makes the Kindle 3 so important? Funnily enough it isn’t the device itself, but two major changes Amazon has made around it. The first is the long awaited launch of the Kindle UK store in August. When the Kindle 2 was launched internationally last year the most infuriating aspect was the grey import nature of the release. Purchases were through the Kindle US store in dollars, costs were high and there was virtually no European specific content. Leap ahead 12 months and this has been largely resolved. With over 350,000 books available Kindle UK is larger than main UK rivals WHSmiths and Waterstones. Prices tend to be cheaper as well with only three books in the Kindle top 20 Bestsellers costing more than £3.50. Amazon also offers over a million out of copyright books (pre 1923) for free. 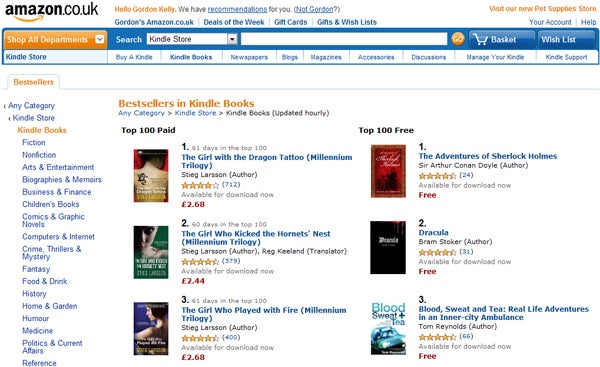 Likewise there are now 129 newspapers available for daily subscription (a 14 day trial period is offered) including the Daily Telegraph, Independent, Mail, Financial Times and London Evening Standard. There are 49 magazines from prominent titles such as the Spectator, Economist, New Statesman, BusinessWeek and more than 10,000 free blog feeds.


The real gem for Kindle owners though is Whispersync, Amazon’s integrated Cloud synchronisation software which not only backs-up purchased content but also synchronises your furthest reading position across multiple Kindles or devices using Kindle apps. In reality this means you can purchase an eBook through the Kindle Android, iPhone or BlackBerry apps, read 50 pages on the train then pick up your Kindle and find the book already downloaded and ready at the last page you left off. It is a wonderfully flexible system which is getting better all the time as Amazon expands its Kindle app across ever more devices (most recent is Kindle Web).
http://www.youtube.com/watch?v=bB7CF2bwhs0


The downside for Kindle owners is Amazon’s continued rejection of the EPUB format. This is the most widely sold format by rival eBook stores and hopes are high to turn it into the MP3 of the eBook world – something Amazon’s stance doesn’t help. This can be overcome using the fantastic (and free) Calibre eBook management software which will automatically convert formats and even wirelessly upload content to a Kindle, but it solves a problem which really shouldn’t be there in the first place.


More happily, all Kindles do support MOBI, PDF, TXT, Audible audio books and the rudimentary playback of MP3 files while JPEG, GIF, PNG and BMP, HTML and Word documents are all automatically converted in order to display correctly.

Speaking of this rudimentary music support (files are played solely in the date order they were added to the Kindle), it comes under a menu section tantalisingly dubbed ‘Experimental’. In it are three features Amazon deems to be in beta with the other two being text-to-speech and a web browser. The former works well simply toggling on or off to allow your reading to continue while you are doing other things (it turns pages to keep pace). The latter is a surprisingly competent Webkit-based (Chrome, Safari, Android) browser that renders pages accurately (minus Flash content) and is handy when caught short, to conduct simple surfing or for checking email. 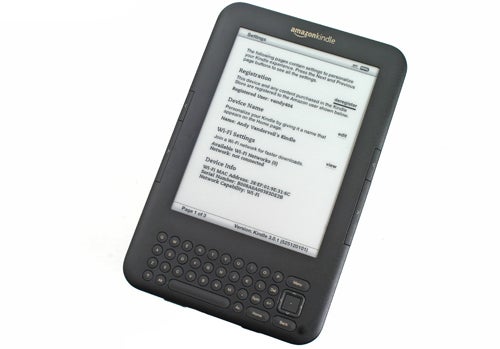 For me it is this feature which will determine whether you chose to spend £109 on the Kindle WiFi or £149 Kindle 3G+WiFi. In a turn up for the books Amazon supplies the latter with free 3G and unlimited global data use for the lifetime of the device. If you travel a lot this basic web browser, combined with the convenience of Whispersync anywhere will more than pay for the additional £40.


All of which leads us onto the second major change which makes the Kindle 3 so important: pricing. Covers are not included (and can cost up to £50), but when the first Kindle launched in 2007 it was priced at $399 (£250). This was a revelation at the time and still compares well to rivals like the Viewsonic VEB612, iRiver Story and Sony PRS-505, but given the Kindle 3 has the best e-ink screen on the market and the best integrated store and synchronisation service the new pricing is revolutionary. Revolutionary not just for Kindle owners, but because it is forcing others to drastically slash their RRPs as well. 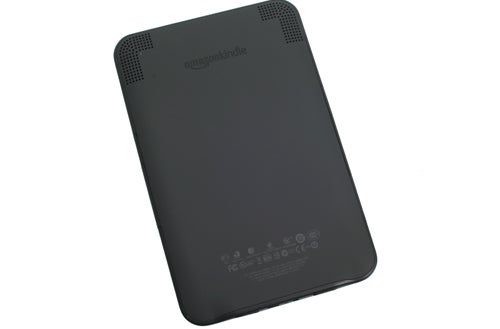 I have argued before that in an ideal world eBook readers should cost under £50 – the value being in their content not the device – though the Kindle 3 is a hugely significant step in the right direction. In fact I suspect it will prove a tipping point for many. It certainly was for both Andy and I as we put our money where our mouths are and bought one (WiFi and 3G+WiFi respectively).


There are significant hardware changes to the Kindle 3 on close inspection, but the real benefits are the excellent Amazon Kindle UK store, Whispersync service and game changing price tags. Existing Kindle owners need not apply, but early adopters will be wincing at the savings now available to those who waited. 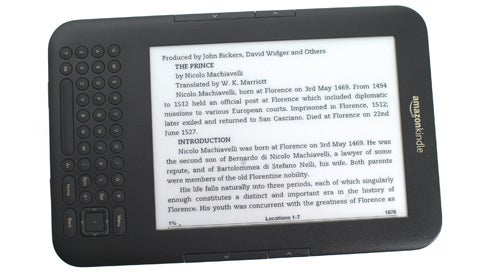 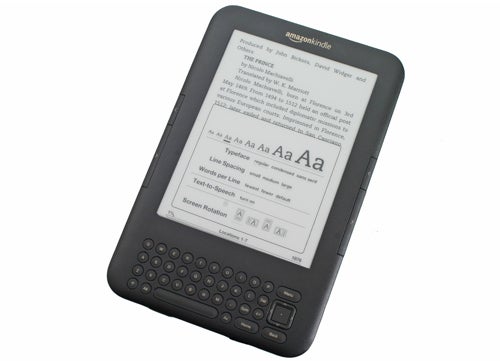 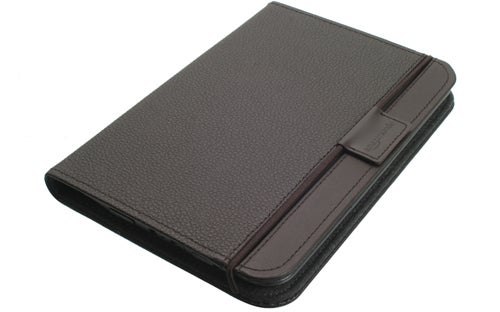 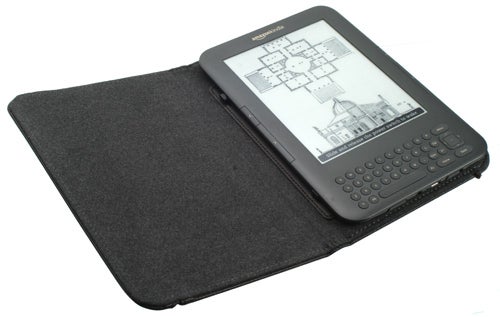 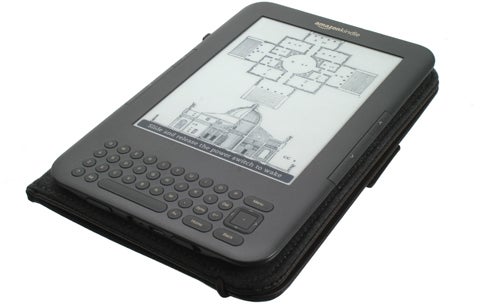