Oh the joys of crawling behind your computer trying to plug in your digital camera, USB memory key, camcorder or any of the multitudes of kit that connects to your PC. I hate it. I’m a big fan of front mounted case ports but for some reason these tend to be at floor level, which doesn’t really make them any easier to use. This is where the AllInOne multifunction panel from Akasa comes in, as it offer a wide range of connectivity options all stuffed into a 5.25in drive bay.

Let’s start with the basics, the AllInOne comes in four colours to match most cases, which are white, silver, black and for some reason red – what happened to computer beige? At first glance it looks like a pretty unremarkable piece of hardware as it has a big front flap and a small LCD display with four buttons below it. The LCD display is part of the integrated fan controller and allows you to adjust the speed of two fans, either manually or based on temperature. 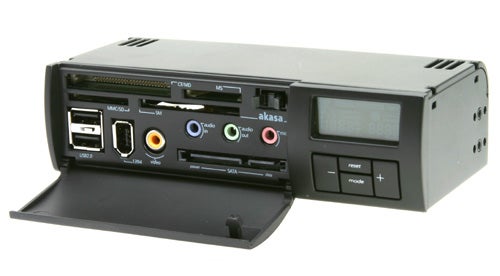 The fans connect to a Y cable which in turn connects to one of the two three pin fan headers on the back of the AllInOne. The other end of the Y cable is connected to the motherboard header so you can still get fan speed readouts inside the BIOS or from a Windows based utility. Two captive wires can be routed to a suitable location inside the case and the supplied temperature sensors are then attached to provide you with temperature readouts on the display. The logic inside the AllInOne can then be used to adjust the fan speeds based on how hot it gets inside your case.

The display will show you the speed of any attached fans and the temperature of the two sensors in either Celsius or Fahrenheit degrees. The supplied manual explains how to set up the various options. For all this to work you need to attach the AllInOne to a standard Molex connector via a special power adaptor. 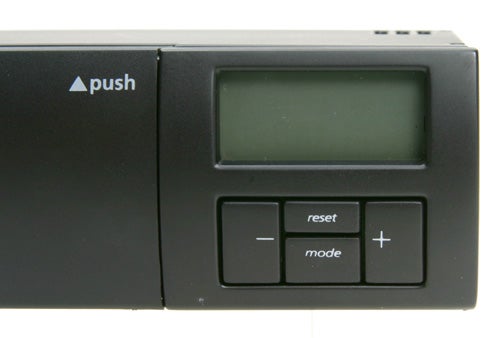 Moving on to the flap, or rather what’s behind it, I have to say I was impressed by the sheer amount of connection options that greeted me when I opened it. There are two USB 2.0 ports, a single six-pin FireWire connector, a composite video connector, SATA data and power connectors, three audio jacks for headphones, microphone and line-in and finally four memory card slots. The card reader accepts Type I/II Compact Flash cards as well as MicroDrives, MemoryStick – including Pro and MagicGate – SD, MMC and SmartMedia. Oddly enough there doesn’t seem to be any support for XD cards. You can of course use various downscaled formats with the help of an adapter as well, just as with any other memory card reader. 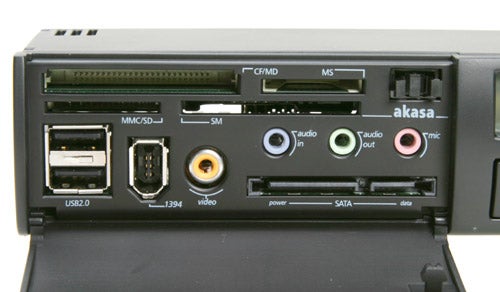 This is really handy as you’ll have all your ports on the front of the computer, just what you’d want for ease of reach. However, this is were the problem starts, as to be able to use all this connectivity you need to wire it up inside or outside, depending on your PC. Akasa has supplied pretty much every conceivable cable, apart from an internal audio cable. For those that don’t have any spare headers on their motherboard or just find that part a little too complicated Akasa provides a rear bracket with a hole in which you have to fit in the back of your PC – this is then used to pass the cables through.

The problem is that if you’re going to use the USB, FireWire, audio connectors and the composite video connector, you’ll have a lot of cables hanging out the back of your PC which will look quite messy to say the very least. Personally I’d opt for the internal cables, but you’re still stuck with using the external ones for audio and video. You’ll also lose one USB header on your motherboard to the card reader, as it will use up half of one. 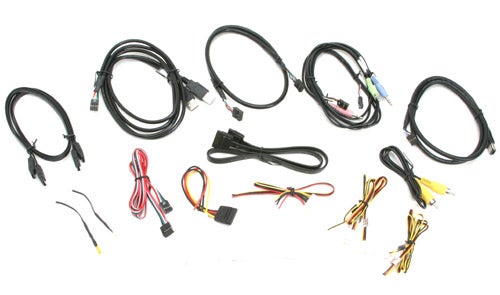 If you intend to use the front mounted SATA connectors then the back of t he AllInOne has to be connected to a SATA header on your motherboard as well as a SATA power connector. Just in case your PSU doesn’t have a SATA power connector, Akasa has supplied an adapter in the box. A special SATA to SATA power cable is also provided for connecting a drive externally, along with two SATA data cables.


A driver CD is also supplied for the card reader, in case you’re not using Windows XP. The manual is pretty comprehensive and lists all the cables and where they are supposed to be attached on your motherboard. A bag of stickers and a couple of adhesive pads are also thrown in for labelling up and attaching the thermal probes. Finally, you’ll find a set of screws and a couple of cable ties to tidy things up with. 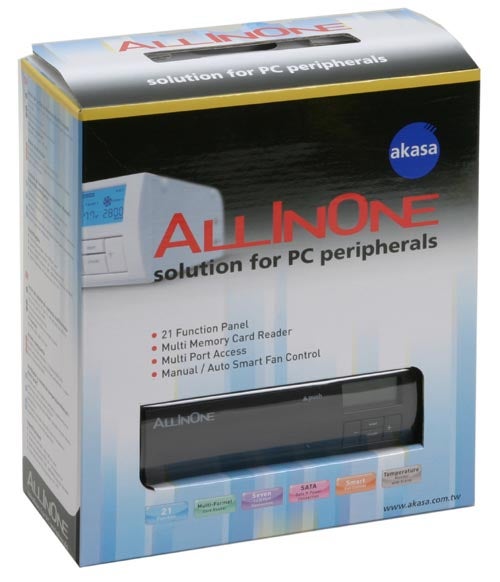 Overall the Akasa AllInOne is a pretty handy – if messy – solution to bring regularly used connectors to the front of your PC. It will set you back £34.96 which is fairly reasonable considering the amount of cables you get with it. The AllInOne is not for everyone and you need some computer tinkering skills to install it, if you persevere it could prove worth the effort.


The Akasa AllInOne is a good idea, but it’s not the perfect solution to the problem. It does what it sets out to do, but it will take some creative cable routing to keep your system internals tidy.