iPads are a lot of fun, and – as the saying goes – there really is an app available for just about everything. But if you want to get serious with the tablet, using the touchscreen alone to interface with apps isn’t quite enough. The Adonit Writer Plus is a folio case that has an integrated Bluetooth keyboard. We’ve seen many before, but this is the best yet.

Design
The Adonit Writer Plus is a reworked version of the original Adonit Writer, reviewed earlier this year. It quickly became one of our very favourite iPad cases, but the new version seeks to solve all the problems of its predecessor.

Its core design is very similar, though. A black plastic frame holds your iPad in place, and there is a familiar Smart Cover-style flap that rests on its screen, protecting it when not in use. It also protects the hinged keyboard module that sits in-between – a slim, metal-bodied affair that looks similar to the official Apple Bluetooth keyboard. 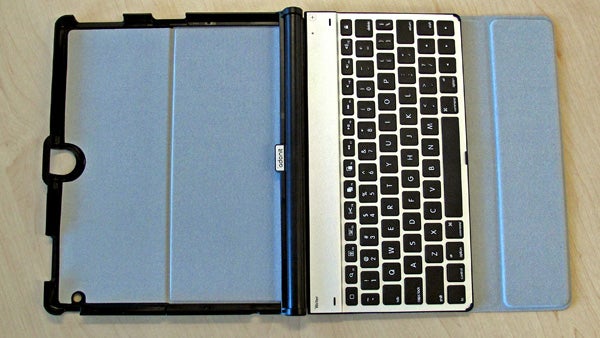 Although not quite as premium-feeling as Apple’s all-metal unibody products, with plastic lining the case and keyboard edges, it looks good and feels tough. The fabric flaps are lined with a high-quality microfiber material that feels top notch under your fingertips too – there’s no confusing the Adonit Writer Plus for anything but a top-tier accessory.

Aside from the initial positive impression left by the cool touch of the anodised aluminium keyboard surround, the Writer Plus also impresses with its compactness. With the keyboard in-tow, it’s still slimmer than some standard folio cases – which the original Writer was not.

How come? Adonit seems to have put a lot of thought into the design of this case. The front flap packs a chunky slab at one end, housing magnets, but next to it there’s a recess for the keyboard to sit in, further reducing bulk. The keyboard is removable too, and while the case doesn’t look or feel quite as good without the keyboard attached – leaving the protruding keyboard connector sticking out – it lets the Adonit Writer Plus shed more weight when needed, and lets you use the keyboard further away from the iPad.

Smooth and streamlined operation is the order of the day here, and the case is completely free of fiddly clasps or poppers aside from the near-invisible ones that hold the iPad attached. To keep the iPad in an upright typing position, and to keep the case from flapping open, the Writer Plus uses magnetism.

This also rules-out having to fold the front flap up to make a load-bearing triangle – as with the Smart Cover. The use of magnets is successful too. The Adonit Writer Plus happily stays in two laptop-like positions, one very upright and the other in a more laid-back position. We took the case out on a train ride to see how it fared in the field, and the magnets didn’t trip up once.

A bonus of using front magnets is that it’ll send the iPad 2 into sleep
mode automatically when closed, and awaken it upon opening, like the
official Smart Cover. There is a caveat, though. The front magnetic “clasp” doesn’t have a strong enough attraction to hold the weight of the keyboard by itself – hold it upside down and it will flip open, leaving the keyboard to dangle by its hinge.

Keyboard
Having a neat magnet-based case mechanism won’t be much use if the Adonit Writer Plus is no good to type on. Thankfully, it’s a great success. 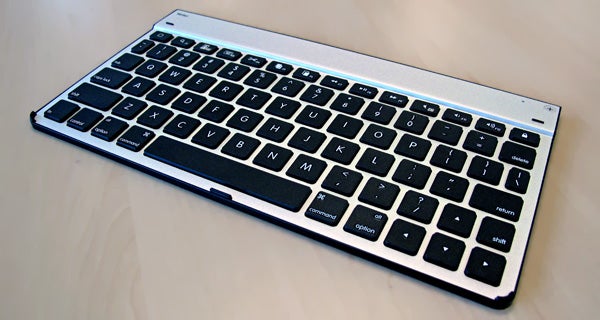 With only the width of the iPad to work with – 2cm less than 10.1in Android tablets like the Asus Transformer Prime – Adonit has naturally had to fiddle with the layout of the standard keyboard. The right shift key is small, the enter key is only 1.5x the size of normal keys and all are less than full-size.

As with a netbook, typing on the Adonit Writer Plus will take a little getting used to. But it’s a big upgrade on the previous model. This time, a full chiclet design features, providing a finger-friendly gap between each key. 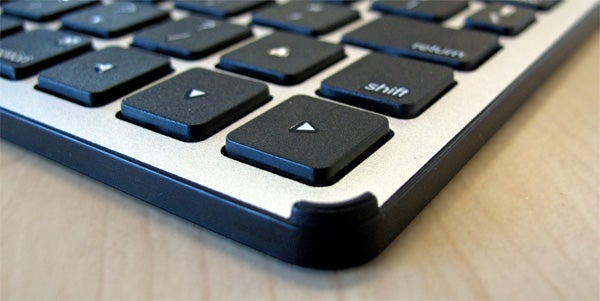 For a keyboard only a few millimetres thick, key depth and action is excellent. There’s a good amount of travel to the keys and a crisp feel to each press. We did experience an odd issue during testing, though. If the keyboard is placed in a particular position over the magnetic flap, the space bar becomes stuck depressed. It’s a design flaw you have to learn to live with. Annoyingly – but not surprisingly – it has a $ key rather than a pound sign button too. But when not playing up, the typing experience is excellent. 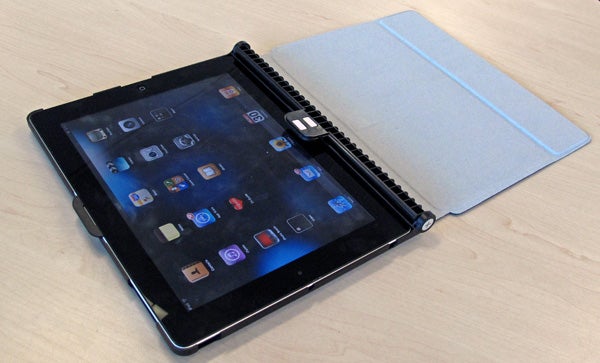 The Writer Plus with keyboard detached – notice the magnet flap

The internal battery powers the keyboard for up to two weeks, and seems to be clever enough to manage its power without any user intervention. There’s a recessed power slide on its back to turn it off completely, but otherwise you’re meant to use the Writer Plus in very relaxed fashion, simply opening it up and using whenever needed – without any re-sync required after initial setup. In standard Bluetooth style, this simply involves putting the Writer into pairing mode by holding down on the subtle “plus” symbol button that sits above the keyboard. 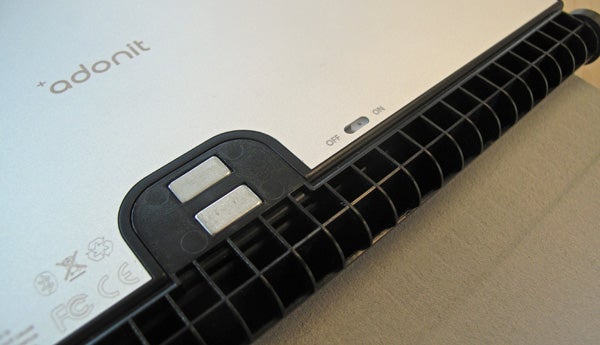 The underside of the keyboard module, while attached

The battery is charged using a microUSB socket on the right edge of the keyboard module, which you can pull off and slot back into the case without pressing any fiddly levers or switches.

Adonit’s Writer Plus isn’t a cheap accessory, but still sits in the normal price range for a non-budget keyboard case. The original Writer was a solid product, but this Plus model is what it “should have been”. A comfortable keyboard that’s far more comfortable and accurate to type on than most third-party models, this is our pick of the bunch.

Verdict
The Adonit Writer Plus is the best iPad keyboard case we’ve ever used. It’s slim, light, offers a great typing experience and even looks good too. Proof that magnets alone can hold an iPad in place, it avoids fiddly poppers, clasps and switches. If you want to turn your iPad into a typing machine, you can’t do much better than this.