If you haven’t heard of IP telephony, you’ve probably been hiding in a cave for the past couple of years. It looks like talking over the Internet is the communication method of the new millennium if the current explosion of Voice over IP (VoIP) products is anything to go by. VoIP does however have its downsides for the general consumer as you either need a very expensive handset or you have to use a headset connected to a PC.


For many of us, the PC/Headset route isn’t really a problem, but with the convenience of cordless phones now more common than not, it feels awkward to be tied down to one place when you talk to another person. Enter the Actiontec Internet Phone Wizard, the solution to this problem; well at least that’s what Actiontec want us to believe. 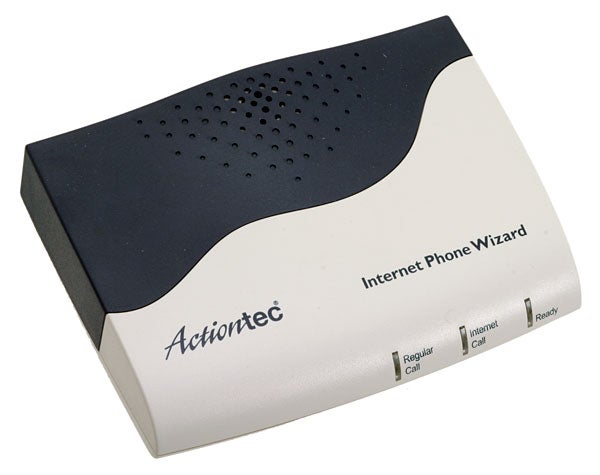 The Actiontec Internet Phone Wizard looks a little like an old fashioned dial-up modem. But don’t let the looks put you off, as this is the least important part of the Internet Phone Wizard and you can always hide it away. It connects to your PC via a standard USB interface and you don’t even need USB 2.0 as it will happily work on older USB 1.1 hardware. There’s also no need for a power adapter as this little box draws its power from the USB port, which reduces cable clutter to a degree. 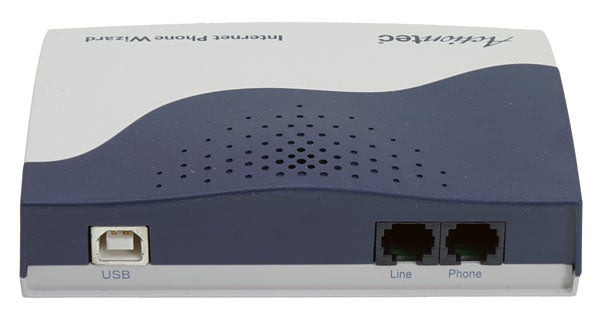 The clever thing here is that you can still use your normal telephone to make and receive calls while you’re also using Skype. Skype has recently added “paid for” services that allow you to accept incoming calls and make outgoing calls. The incoming calls are only available in a few countries as yet, so make sure you check out the list before you presume it will work. This can however be handy for a business that needs a local number abroad for its customers, since they would only be charged the cost of a local call rather than an international call.


Skype’s call rates are also quite competitive, so you might actually be able to save money on your calls, not only by calling other Skype users, but also by calling landlines. As you can assign speed-dials in Skype, the Internet Phone Wizard allows you to use these in combination with your telephone handset. This means that you don’t have to be next to your PC to dial your Skype contacts. To place a call via Skype you press the # key twice to switch the mode of the phone and then the speed-dial for your Skype contact.

All this is pretty easy and works quite well, but everything isn’t perfect. I came across a few issues that I didn’t seem to be able to figure out. First of all, if you don’t have your phone socket close to your PC, you might have to run two extensions from your phone socket to your computer. The reason for this is because my ADSL router would not connect to the Internet if I passed the phone signal through the Internet Phone Wizard before plugging it in to the ADSL router.


Neither would my cordless Philips DECT phone ring when I had an incoming Skype call, but this could have been because it wasn’t plugged in to my landline at the time. The audio quality was far better than I expected, although using a normal headset connected to my PC produced even better sound. I have to admit that I’m a Skype virgin which might sound strange for a technology journalist, but I have really cheap international call rates on my normal land line. I therefore haven’t paid too much attention to Skype until now. 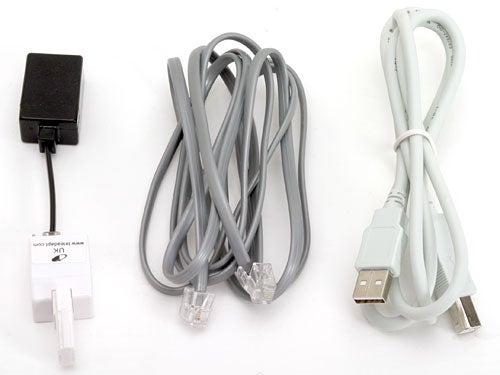 There is one other problem with the Internet Phone Wizard and that is the fact that you need to have your PC switched on with Skype running at all times to be able to use it. But then I guess if you’re already a Skype user, you’re accustomed to having your PC on whenever you’re chatting. There is of course the possibility to set up a second PC and use it as a Skype gateway, but this does add a lot of additional cost.


Actiontec has put together an interesting product with the Internet Phone Wizard – it’s not perfect – but it is a step in the right direction. The future will tell if this is the way to go, but Skype has acquired an enormous following in a very short time and even my parents are using it now. I think the Internet Phone Wizard would make it a lot more accessible for users like them that aren’t too confident when it comes to using new computer software. As once set up they could just pick up their phone and with a few key presses call their Skype contacts. 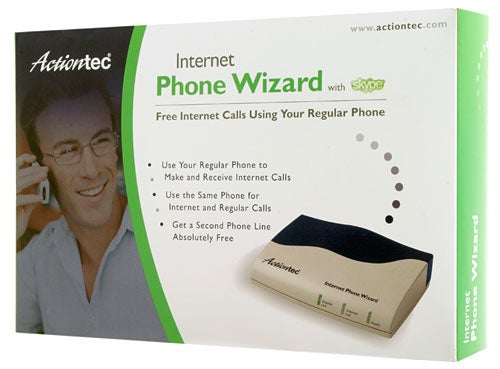 However, I do think that this box of tricks is quite expensive at £39.95. If Actiontec knocked off a tenner and give it a built in speaker so it rings at the same time as your telephone, I wouldn’t hesitate to recommend it. As it stands, the Internet Phone Wizard is a decent enough product, but you could just as well use a Bluetooth headset, which would provide the same mobility as a cordless phone.


The Actiontec Internet Phone Wizard is an interesting product that makes it easy to use the Skype VoIP service. For less computer savvy users this product has merit, as long as they know someone that can set it up for them.