As the DX900 we looked at last week was pretty much just a rebranded version of a Glofiish phone that had previously been on the market, the F900 is really Acer’s first handset that has been built in-house from the ground up. For a first attempt at a smartphone it’s an impressive effort, but it’s not without its faults, although given its competitive price many of these can be overlooked. 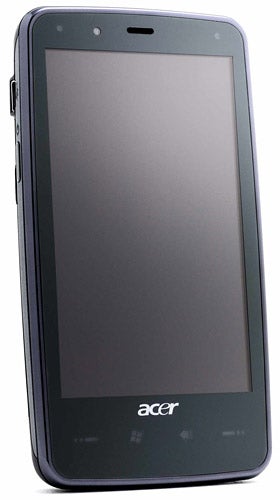 It’s obvious from the moment you take the F900 out of the box that the handset has been heavily influenced by the design of HTC’s Touch HD. The dimensions of the two are almost identical, the front of both handsets are dominated by a large 3.8in, high resolution, resistive touchscreen and both share the same all black glossy finish. As with the Touch HD, the F900 also has a row of four touch buttons perched beneath the display (call/answer, home, back and call end), but whereas the HTC handset only has two physical buttons (the on/off button and the volume rocker switch) the F900 adds a third to control the camera. 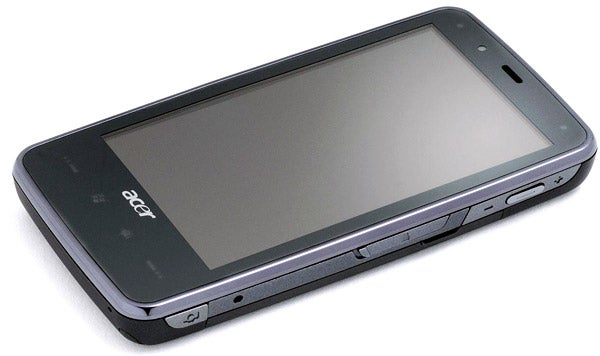 Another welcome addition is the easily accessible microSD card on the right hand edge of the phone. This is much better placed than the slot on the Touch, which is tucked away under the battery cover. However, the F900 does lack a dedicated headphone jack, leaving you to rely on the mini USB port that’s awkwardly mounted on the left hand edge ready to snag in your pocket when you’ve got the supplied stereo headset attached.


One area where the F900 really does excel is its screen. This is not just because it’s large and bright, but also because it has a high resolution of 800 x 480 pixels. The extra pixels make it excellent for viewing web pages, as you don’t have to perform as much scrolling around as you do on other handsets with lower res screens such as the iPhone. Videos also looked top-class as it delivers smooth motion and vivid colours. However, one negative is that it doesn’t seem to be quite as accurate as similar high-res screens on devices like the Touch Diamond2. Every now and again, we had to tap two or three times on buttons or check boxes to get them to register.

Under the bonnet, the F900 is driven by a Samsung SC3 6410 processor running at a reasonably sprightly 533MHz, backed up by 128MB of RAM. The phone isn’t what we’d describe as lightning fast, as sometimes it seems to struggle a bit when you’ve got multiple apps running. However, for most day to day tasks like browsing the web and watching the odd video it’s plenty fast enough. Along with the 128MB of RAM, there’s also 256MB of built-in storage and this can be boosted using microSD cards. 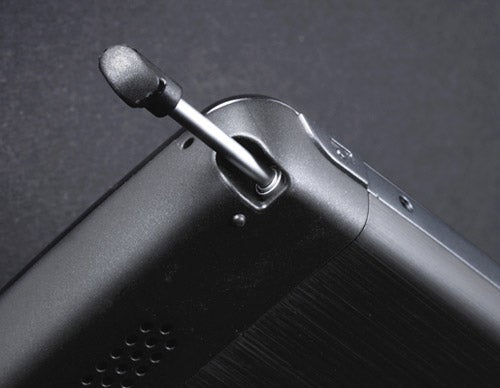 When it comes to web browsing, you’ll have to download the Opera browser yourself as by default Acer leaves you reliant on the woeful built-in Internet Explorer. However, once you do load up Opera you’ll find that the handset delivers a pretty good browsing experience when running on either Wi-Fi at home or on HSDPA when out an about (speeds of up to 7.6mbit/s are supported on the latter). 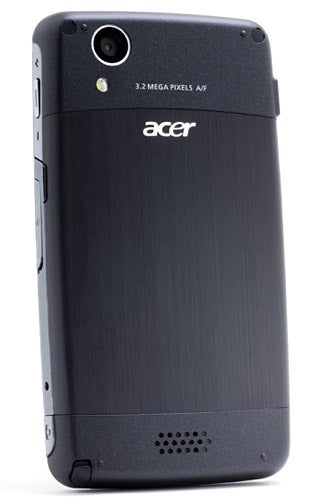 The handset also has quad-band support for GSM and triband for 3G so you shouldn’t have much trouble using it to make calls or connect to the web on your travels. As with most of today’s smartphones the F900 also has onboard GPS. No navigation software is included, but Acer has pre-installed Googlemaps. The GPS chip worked perfectly with this and was quick to lock on to satellites from a cold start. Another neat addition is the onboard FM tuner. It’s not RDS enabled so it doesn’t pick up station names, but you can store stations as presets and add names to them there. The F900 also has a 3.2-megapixel camera with autofocus and an LED flash, but the shots it takes are run-of-the-mill cameraphone quality. That’s to say edges tend to look a tad on the smudgy side.

The F900 runs Windows Mobile 6.1 and like most manufacturers that use this, Acer has added its own interface tweaks, called Acer Shell, over the top to make touchscreen navigation that bit easier. Acer Shell presents you with a view of a virtual desktop with various items strewn around it including an open envelope for email, a paper calendar for, you guessed it, the calendar, and a photo frame for viewing pictures.


Tapping on each item takes you to its associated app, but the problem is that not all the items are intuitive representations of the applications or menus they relate to. For example, would you really associate a jar of pens and pencils with the settings menu? 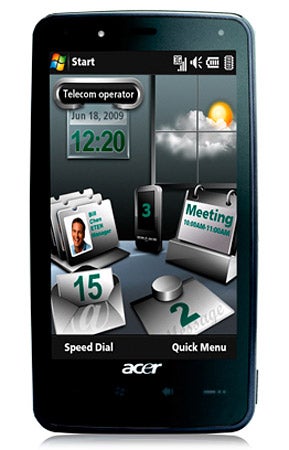 Nevertheless, the animations as you move from the icons to the actual application or menus are slick and smooth and we like the way that some of the desktop icons are dynamic. For example, the picture frame always shows the last picture you viewed in your photo album and the rollerdex shows the picture of the contact that you last called. Still, we have to admit that we much preferred the Spb Mobile Shell interface on the DX900 as it’s faster and more intuitive to use.


The phone’s call quality was excellent during our testing period, as the mic isn’t as directional as some other handsets we’ve used and the earpiece is reasonably loud. The F900 comes with a sizeable 1,530mAh lithium-ion battery and on the whole battery life is par for the course for a WinMo device. We got two days from it between charges for medium usage of the key features like GPS, browsing over HSDPA and listening to music.


We don’t think the F900 is quite as good a handset as the HTC Touch HD. The overall design is not as neat, the HTC TouchFlo interface is better than Acer Shell and the Touch HD feels a tad faster to use. However, the F900 is over £100 cheaper than the Touch HD and if you swapped out Acer Shell for something like Winterface or Spb Mobile Shell you’d still end up with a pretty impressive handset. So really, the choice comes down to one of price. If you’ve got the cash then by all means go for the Touch HD, but you’re arguably getting better value for money with the F900.