It’s fair to say that none of Acer’s previous smartphones have been greeted with a rapturous critical reception. There have been some decent phones among its brood, such as the Liquid E, but on the whole the company hasn’t been able to repeat the success it’s enjoyed in the laptop market. With the Stream, Acer is looking to change all this and, on the face of it at least, the handset boasts perhaps the most impressive specification of any Android phone on the market. 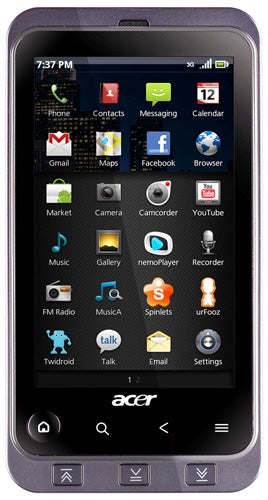 The Stream is definitely the best-looking phone Acer has ever produced. It’s a little bit larger (119.5 x 63 x 11.2mm) than most touchscreen handsets, but it still manages to feel comfortable to hold in the hand. The design looks slightly industrial, but in a pleasing way, and the gun metal grey and glossy black finishes used on the front help it look rather classy. Importantly it also feels like it’s built to last, which is something we haven’t always been able to say about Acer phones in the past. 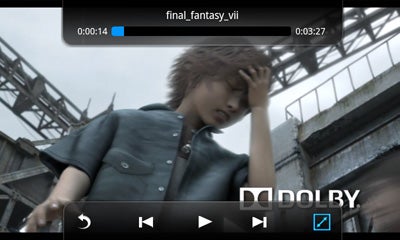 As well as the four standard Android buttons, there are also three media playback controls at the very bottom of the phone. These are designed to be used with the nemoPlayer video player when it’s running in landscape mode. In truth these buttons are a little unnecessary as the touchscreen provides all the control you really need, but some people may find them a welcome addition and they do look quite snazzy. 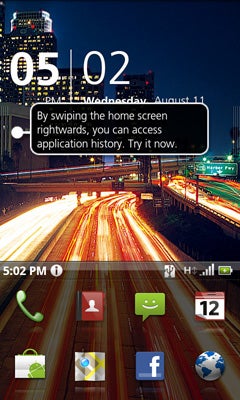 The handset runs on Android 2.1, but Acer has heavily customised the version used here. In fact, it’s probably the most heavily customised version of Android that we’ve come across yet. For starters, it doesn’t have the traditional Android homescreen. Instead, its homescreen is divided into two parts. The bottom of the display contains six permanently displayed shortcuts. Acer has also gotten rid of the pull down notification menu and instead replaced it with a thin bar above these shortcuts that displays small notifications that you can then click on to find out more information. 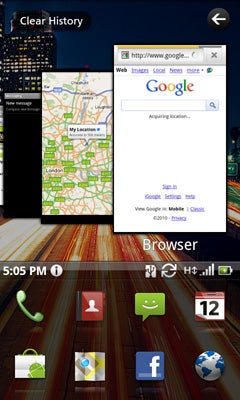 The top half of the screen is divided into three sliding panels. The middle panel simply displays the date and time (despite appearances, you can’t add any widgets to this panel), while the left hand panel shows a rotating menu of thumbnail screenshots of recently used apps so you can jump back into an app exactly where you left off. The right hand panel has a similar thumbnail view, but this time it shows thumbnails of your photos, videos or music tracks with a button at the top used to switch between the three media types.

As widgets can’t be displayed on the central panel, Acer has had to stick them somewhere else and it’s chosen to put them on the lock screen. When you press the power button to take the phone out of sleep you’re presented with a lock screen that actually acts more like the traditional Android homescreen. You can swipe over and back on this lock screen to move between up to five pages of widgets. To exit this and enter the main homescreen you drag upwards on an animated page curl at the bottom left of the display. You can also return to the widgets view by pressing and holding the home button for a couple of seconds. 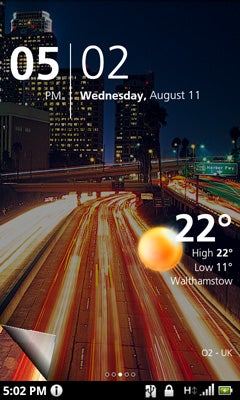 It’s quite a weird set up and in truth we didn’t think it worked all that well as it just seems to overcomplicate things. We also found it rather awkward having to move away from the homescreen to get at your widgets. Thankfully, you can turn all this off and revert to the vanilla Android user interface via a switch in the settings menu. However, this obviously negates one of the phone’s unique selling points.

But while the interface may be a bit of an issue, the handset does have many other positives. Running on a 1GHz Snapdragon processor with 512MB of RAM it feels very fast and responsive. Menu transitions are smoothly rendered and apps are incredibly quick to load. 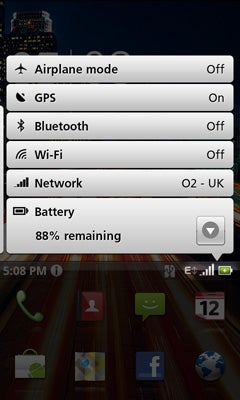 The 3.7in screen is also highly impressive. The display’s resolution of 800 × 480 pixels means it looks pin sharp and as it uses AMOLED technology, colours look fantastically vivid and black levels are extremely deep and inky. Many OLED displays struggle to produce acceptable levels of brightness when being used outdoors, but the Stream’s screen is fairly good in this regard. It’s a capacitive display too, so you can use the pinch to zoom gesture in Google Maps and the web browser. 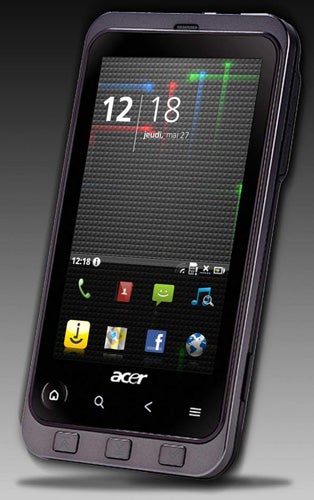 As you’d expect of a handset in this price range, pretty much all of the connectivity bases are covered. There’s both HSDPA and Wi-Fi, as well as GPS and Bluetooth. Call quality was also good during our test period. However, battery life was a lot less impressive, as we found we had to charge it after about a day and a half’s worth of use, whereas most smartphones will do two days.


The 5-megapixel camera sounds good on paper, especially as it also features 720p HD video recording. But while stills shots certainly don’t look too bad as the camera captures good colour and plenty of details, it’s much less impressive when it comes to video. Video captured at 720p resolution certainly doesn’t pass for what we’d call high definition, as footage is becomes extremely pixelated and jerky when you’re trying to capture anything with a bit of movement in the frame. 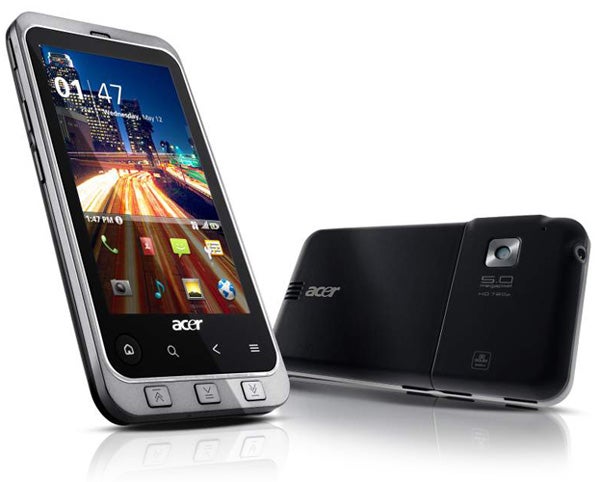 Unfortunately, another feature that sets the Stream apart form its rivals – its mini HDMI port – also turns out to be a bit of a disappointment. The port is tucked away next to the micro-USB socket on the top right-hand edge of the phone and Acer supplies a mini HDMI to full-sized HDMI adapter lead in the box. However, the port only works in conjunction with Acer’s own nemoPlayer software, so you can only use it to view photos or watch videos; you can’t display any other app via your TV. In fact, once you’ve got the HDMI cable connected, every time you view a photo or watch a video it asks you whether you want to switch to HDMI output. When the video or photo slideshow is finished, it dumps you right back to the standard display because it can’t even show the nemoPlayer’s menus via your TV.


The Stream is obviously Acer’s attempt to break into the big league when it comes to premium smartphones and there’s certainly much to like. It’s very fast, has a great screen and even the design is a big step forward from Acer’s previous efforts. However, it’s hampered by its poor battery life and Acer’s rather awkward user interface enhancements. Acer is definitely on the right track here, but sadly with the Stream some of the ingredients for success still haven’t made it into the mix. 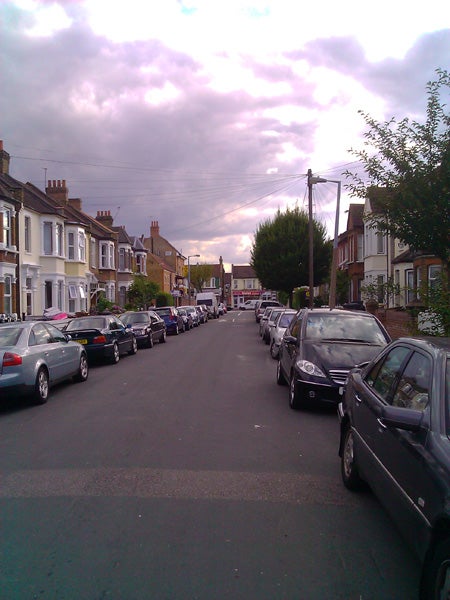 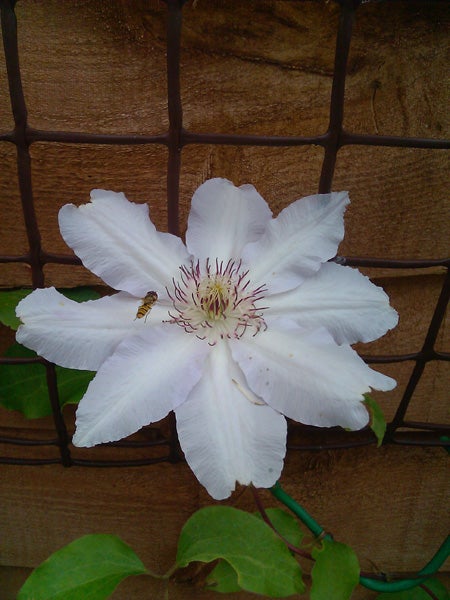 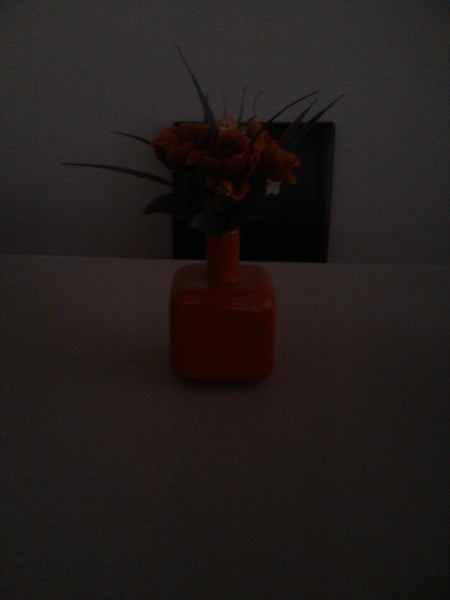