What is the Acer Spin 5?

Mobile professionals can be quite demanding when it comes to laptops, so it’s no surprise that many are happy to part with significant sums of cash for their ideal work device. However, the Acer Spin 5 offers an impressively flexible design to suit all types of users, at a price that won’t cripple your savings.

The Spin has been designed to include 360-degree hinges, enabling you to bend the screen all of the way back until the lid touches the rear end. In this form the laptop acts like a giant tablet, challenging even the beefiest of biceps. Alternatively, you can adopt ‘tent mode’, which provides a comfortable way to play around on that spacious touchscreen.

Packing some solid mid-range specs and a full-sized keyboard, the Acer Spin 5 appears to offer plenty for demanding users on a budget. So how does it hold up under scrutiny? 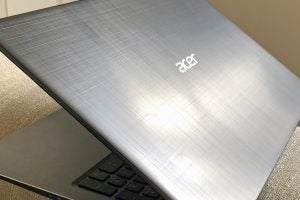 First up, if portability is key then the Spin isn’t going to cut it. While this 2.2kg beast isn’t too chunky, it will fir into only the most spacious of backpacks. Despite the 15.6-inch display, the chassis size is closer to that of a 17–inch model thanks to the thick bezels surrounding that screen. And if you do decide to use the device as a tablet, you’ll probably want to hit the gym and build up some serious upper-body strength. Either that, or rest the device on a table or your lap.

Still, we have zero complaints about the rest of the construction. The Spin 5’s metal lid sports an attractive etched design and certainly doesn’t scratch easily. Meanwhile, that sleek silver finish continues across the frame, giving a premium look and feel to the laptop.

Those hinges are just as well designed. You can tilt the display to any degree and it will hold firm, even with plenty of poking and prodding. 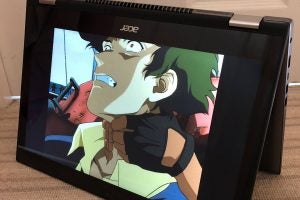 Connectivity is strong, too, as you’d expect of a laptop this size. Two USB 3.0 ports are backed by a third USB 2.0 connection, plus a Type-C port that can be used for charging the Spin. There’s HDMI for hooking up a monitor or projector, plus an SD memory card reader. There’s even a dedicated volume rocker on the edge, in addition to the standard function key control.

As for storage, a 256GB solid state drive offers plenty of room for your software and media. Even video editors won’t run out of space any time soon. 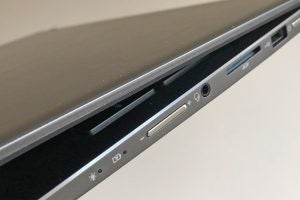 One of the benefits of that sizeable chassis is the space afforded to the keyboard. The Acer Spin 5 boasts a comprehensive keyboard, complete with a numerical keypad for anyone who loves a bit of spreadsheet action.

Those isolated keys poke up through individual holes in the frame, so they’re well spaced out. As soon as I started using the Spin, I had no trouble hitting my peak touch-typing speed. There’s no flex or sponginess, and the key travel is deep enough to be satisfying. Combined with the wide palm rest, you get a pleasingly comfortable typing experience.

My only complaint is the lack of any kind of gap between the standard keyboard and that numerical keypad. I kept hitting the number lock instead of the backspace key at first.

If you often find yourself working well into the wee hours, then you’ll be thankful to discover that the keyboard is fully backlit. You can activate this feature with a quick tap of the F8 key, and switch it off the same way to conserve battery power. 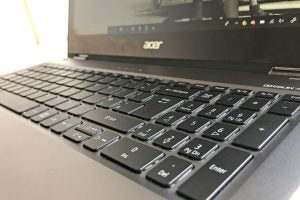 Although the Spin 5 boasts a touchscreen display, you still get a touchpad housed in the palm rest. This isn’t as large as we expected given the size of the Spin 5, although it proved to be well sized for everyday use. It’s also perfectly responsive and supports all of the usual multi-touch gestures. While there aren’t any markings to indicate so, you can push in the bottom corners for a left- or right-mouse click.

However, the pad is positioned off to the left, which made it a little awkward to use at times. Left-handed users won’t have any trouble, but I often found myself right-clicking by accident when I needed a left-click.

Built into the top-left corner of the touchpad is a dinky square fingerprint sensor. This may be compact but it usually recognised my digit on the first tap.

The Spin 5 also supports Acer’s Active Stylus pen, which came bundled with our review device. This can be used to edit docs or draw on the go, although there’s no space in the laptop’s frame to store it away. 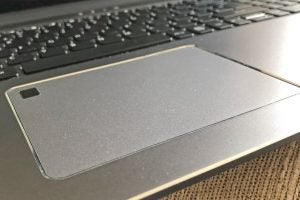 The Spin 5’s 15.6-inch IPS LCD panel offers a strong first impression. The Full HD resolution results in crisp visuals, while viewing angles are good enough to share a movie with a couple of mates. I enjoyed bending the display right back and standing the laptop upside down, for watching a movie or getting stuck into touch-orientated tasks.

However, this isn’t the brightest panel around. In addition, I occasionally struggled to see what I was doing when using the Spin outside. This problem is made worse by the lack of an anti-glare finish. If you’re watching a movie set in a basement, nightclub or dungeon, you can basically forget about seeing anything besides fuzzy silhouettes.

Likewise, colour reproduction leaves a lot to be desired. The 61.8% sRGB coverage and 43.4% Adobe RGB coverage shows a lack of accuracy that will pain photo editors and other creative professionals. 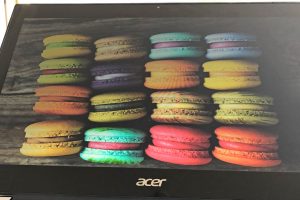 The Spin 5 serves up a pretty beefy Dolby Audio speaker, housed just above the keyboard. This can blast some reasonably powerful audio at you, proving more than a match to noisy environments such as busy kitchens and train stations. While the sound isn’t quite directed at you when the device is in tent mode, everything remains perfectly clear.

That said, I always plugged in some headphones for enjoying music. Rock and dance tracks sound rather limp, with no pumping bass to bring them to life.

Powering the Spin 5 is Intel’s Core i5-8250U processor, running at a base clock speed of 1.6GHz. On turbo mode this can be boosted to 3.4GHz. This is accompanied by a healthy 8GB of DDR4 SDRAM.

This proved a good match for pretty much any task I threw at the machine. Working on docs while streaming media and chatting with colleagues, all at the same time, was a trouble-free experience. 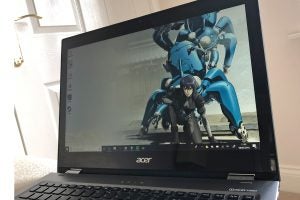 We ran the PCMark 8 benchmark on the Spin 5, which churned out a score of 3046. That’s a better result than most rival laptops at this price point. For instance, the Asus ZenBook UX430UA achieved a score of 2767, while Lenovo’s IdeaPad 720S hit just 2426.

However, the Spin 5 doesn’t offer up dedicated graphics support. Instead, Intel’s UHD Graphics 620 integrated GPU is used to power your visuals. This is perfectly fine for photo editing, design and other creative tasks, but gamers will want to look elsewhere for their portable pal.

Older titles such as Skyrim, Dishonored and Shadow Warrior run fine, as do basic puzzle and adventure games. If you try to play anything more recent or demanding, however, be prepared to enjoy a slideshow rather than a smooth and satisfying experience.

The Spin 5 doesn’t quite manage the advertised 13 hours of use per charge. I tested the laptop by running several tasks at once, including working in the Edge browser, streaming music via Spotify and messaging mates on Skype. From a full charge, with the display set to medium brightness, you can expect around five hours of play time before the battery is spent. 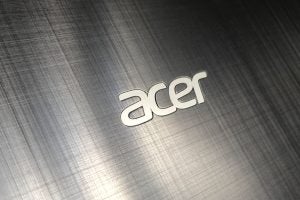 However, bump up that display brightness to maximum and the battery will give out in just four hours with the same usage.

I also ran our standard battery benchmarking test, which involves running a looping schedule of video playback and web browsing at medium brightness. This fully drained the Spin 5’s battery in just under five hours.

Why buy the Acer Spin 5?

Note that if you want a portable pal to chuck in your backpack every day then the Spin 5 isn’t a particularly strong choice. Not unless you’re trying to boost your core strength from constant heavy-lifting. The Spin 5 definitely works better as a stay-at-home device, to carry from room to room.

On the surface it appears to be well suited to creative professionals, with the flexible design and stylus pen support. However, the lack of dedicated graphics and colour accuracy means that demanding editors will want to look elsewhere.

Still, the Spin 5 does impress with its smart and flexible design. That keyboard is a pleasure to type on and anyone who doesn’t demand strong screen accuracy will enjoy the crisp display.

Despite its lack of dedicated graphics and its bulky build, the Spin 5 has a lot to offer. The flexible design helps it to stand out from the crowd, while the typing experience is also solid. Sadly, the lack of colour accuracy and limited portability mean it isn’t a good fit for mobile professionals.