The Acer Iconia Tab A200 is the low-end model in the 2012 A-series Android tablet line-up. Up top there’s the 1080p-screen A700, in the middle sits the Olympics-branded A510 and down below is the A200. It has a lesser screen, chunkier body and less power. But in this latest wave of tablets, these limitations don’t necessarily result in a completely compromised and undesirable gadget.

At 12.4mm thick, the Icona Tab A200’s body has just a little chunkiness to it. It’s enough to rob it of the ultra-thin feel of the iPad 2 and Samsung Galaxy Tab 10.1, but some may find the extra millimetres reassuring. There’s a dimpled texture to the slightly soft-touch back that feels pretty good in-hand too. 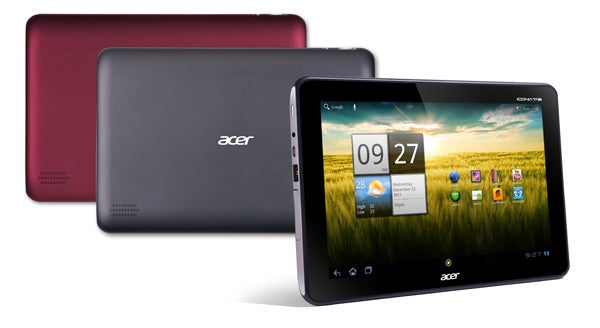 Its curvaceous figure will fit-in well with sofa surfing, but add the slightly clumsy official Portfolio case and it will seem a bit of a porker for portable use. Also, at 720g it’s on the heavy side for one-handed use.

As is often the case with tablets not obsessed with shaving off the fat, the Iconia Tab A200’s connectivity is good. On the left edge is a full-size USB port, a microUSB port, 3.5mm headphone jack and a flap covering the microSD card slot. The tablet comes with 8GB of storage from the off, and the card slot increases its storage flexibility hugely.

Although we didn’t get to test the tablet extensively, the USB port will hopefully enable plugging-in hard drives and USB sticks as well as mice and keyboards. We’ll check this in our full review.

By release time in June, the Acer Iconia Tab A200 will run Android 4.0 Ice Cream Sandwich, but at its launch it was running version 3.2 Honeycomb. However, both use full software navigation, rather than relying on hardware buttons so the experience of using the tablet shouldn’t change too much. 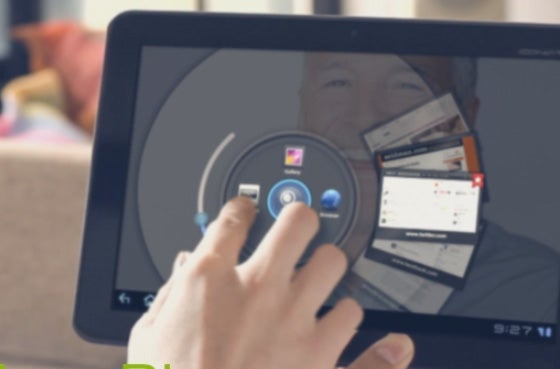 The software was fairly vanilla aside from one clear Acer addition. In the centre of the nav bar at the bottom of the screen is a little circle shortcut that opens-up Acer Ring. This is Acer’s quick feature bar, giving you access to volume control, a quartet of your favourite apps and a scrolling wheel of web links.

Although not something useful enough to sway buyers by itself, it’s fairly well-executed – that green blob on the nav bar does spoil the Android OS’s look a bit though, doesn’t it?

The Acer Iconia Tab A200 uses a dual-core 1GHz Tegra 2 processor, the chip used in the majority of 10.1in Android tablets released in 2011. It should be enough to make Android run quickly, but there was noticeable lag throughout the interface in our demo. Even scrolling pages in the apps menu was a little stuttery.

However, this will hopefully be ironed-out once Ice Cream Sandwich is installed and a few optimisations have been applied – with 1GB of RAM and a dual-core processor there’s no excuse for lag. In theory it should be able to handle everything Android has to offer – there are no quad-core optimised Android apps yet. 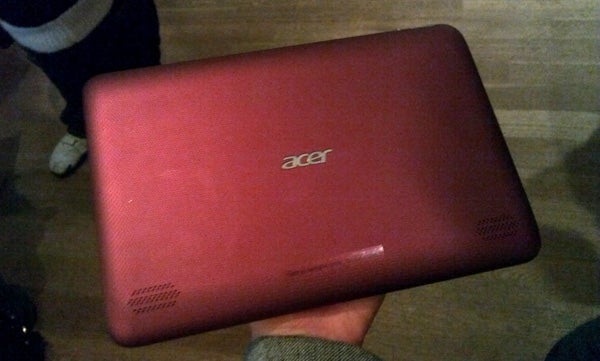 Its screen is another area affected by the low price, but its basic specs are dandy. It’s 10.1in across and uses a 1,280 x 800-pixel resolution, just like every top-end Android tablet of 2011. The panel is the part that’s less impressive. Contrast was lacking, with blacks a touch blue-grey and there was clear backlight bleed.

It doesn’t have the high-quality look of an IPS screen like the iPad 2’s, but it didn’t suffer from contrast shift anywhere near as badly as Acer’s last affordable Android tablet, the Iconia Tab A100. Outside the tablet market, this screen performance would be fine, but this is an area where the bar is set extremely high.

If you don’t mind missing out on that luxury element that’s an important part of any tablet, the Acer Iconia Tab A200 provides the basics. The claimed 8-hour battery life is decent, Android Market support is in, and the trimmings of a 2-megapixel user-facing camera, Bluetooth and Wi-Fi n are all present. However, with previous-gen tablets available on the cheap, the audience for this gadget is likely to be limited among the tech-savvy.

The Acer Iconia Tab A200 is a budget 10.1 Android Ice Cream Sandwich tablet that will go on sale for £279, significantly undercutting top tabs like the Samsung Galaxy Tab 10.1. Although it side-steps the most serious issues that cut-price tablets often suffer from, areas where the money has been saved are apparent. Without any stand-out features, we’re not convinced it’s necessarily a better buy than a first-wave Android Honeycomb device.