Ferrari is no stranger to putting its badge on other companys’ products and Acer has been selling Ferrari branded notebooks for a while now. Asus has a similar deal with Lamborghini and though these products are always going to be a little too expensive for mainstream markets, for Ferrari owners or enthusiasts there’s probably some appeal in owning a laptop with the legendary prancing horse logo on top. 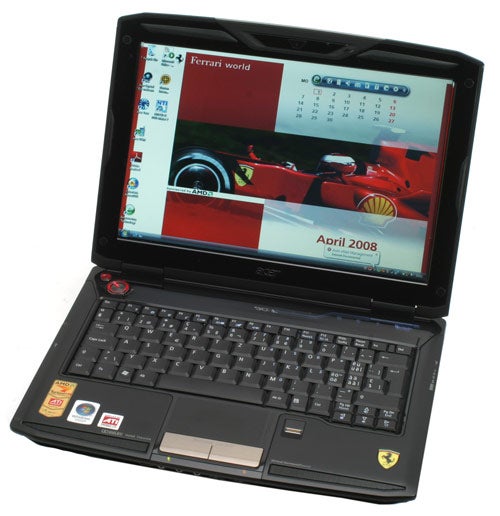 Acer’s latest offering using the brand is the Ferrari 1100, a 12.1in laptop that uses the AMD mobile platform and retails for a not insignificant £1,400. It utilises the same basic chassis as the far more mundane Acer TravelMate 6292 that we reviewed in July of last year, but adds a fair dose of style and panache.


Probably the best part of the notebook is its lid. Finished in a combination of carbon fibre and smooth black plastic with the Ferrari logo sitting proudly in the middle, it truly looks and feels the part. Inside it’s perhaps a little less coordinated but nonetheless still attractive. There’s glossy black plastic around the bezel that attracts an awful lot of dust and which is continued around the keyboard, joined by more smooth black plastic around the sides and a textured touchpad. A bright red backlit power button adds to the Ferrari flavour, as does another Ferrari logo and lettering that’s backlit in the top right. 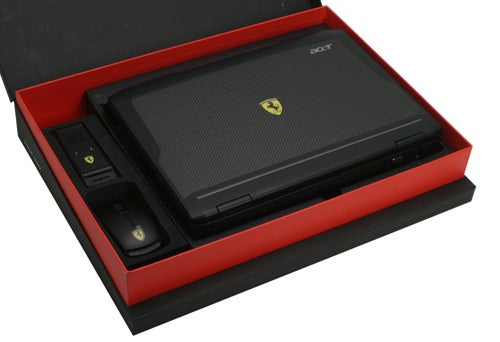 It’s noticeable too that Acer has tried to make this model look racier with the addition of some more angular lines, specifically around the webcam on the bezel and at the front where each corner is slightly tapered. Overall, it’s an accomplished look that fits quite nicely with the Ferrari branding without looking garish or unseemly, so Acer can pat itself on the back in this respect. You also get a few nice but hardly essential extras, such as a presentation box, and a Ferrari branded mouse, Skype phone and carry slip case.


Internally, however, the Ferrari 1100 is somewhat hamstrung by its reliance on AMD’s mobile platform, a product of its sponsorship of the Ferrari Formula 1 team. As we’ve noted previously AMD’s mobile offerings, specifically its mobile processors, leave something to be desired compared to the more powerful and frugal Intel options. This system comes equipped with an AMD Turion 64 X2 TL-66 that’s clocked 2.3GHz with 1MB L2 Cache, but the high clock speed is something of a red herring since any of Intel’s CPUs running at 2.0GHz or above will outperform it. 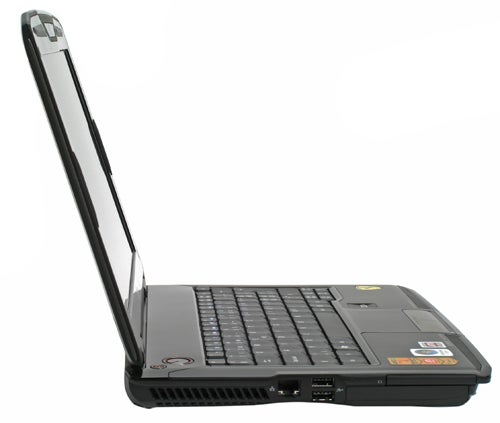 However, Acer has done its best to alleviate this by cramming as many high end features into the Ferrari 1100 as possible. Thus, in support of the CPU is 4GB of 667MHz DDR2 RAM running in dual-channel mode, a shock protected 250GB 5400rpm SATA HDD and a very nice 1,280 x 800 LED backlit screen. Naturally, to complement the 4GB RAM, you also get Vista Ultimate 64-bit that unlike the more regular 32-bit OS can use all that system memory to the fullest.

Delving a little deeper reveals both Gigabit Ethernet and Draft N wireless from Broadcom and Bluetooth 2.0 EDR, so networking and wireless connectivity are well covered. Other sundries include a smart slot-loading 8x DVD+/-RW optical drive, a fingerprint reader and a 0.3 Megapixel webcam. Overall, there’s not a great deal that’s missing from the Ferrari 1100, but does this really equate to a notebook you should think about buying?

It certainly helps, but even when you take all these great features into account there are quite a few things about this machine that raise doubts. Before talking about performance in detail, which is hit and miss, there are quite a few niggling issues that are quite disappointing for a notebook in this price range.


First among them is the keyboard. Many of the problems, if not all, are inherited from its parent machine, the TravelMate 6292. Layout is mostly okay, avoiding most of the common pitfalls but a slightly narrowed Return key seems like an odd move to make. Why, one would reasonably ask, would you compromise one of the most frequently used keys?

More concerning, though, is the actual quality of the keys. They simply don’t feel at all crisp or responsive, making typing feel like dipping your hands in treacle. This is exacerbated by a level of flex in the keyboard and as a whole the typing experience is pretty poor and certainly not to the level of a machine costing this much. It’s a problem common throughout some of Acer’s notebooks and one that could do with some serious work.


Our other main gripe with the Ferrari 1100, though, is the weight. We weighed our sample in at just less than 2kg, at 1.98kg. This makes it marginally lighter than the TravelMate 6292 by virtue of the lighter LED backlit screen, but despite weighing less than 2kg it’s still quite a heavy notebook at this size. Competing systems, such as the Samsung Q45, weigh only 1.86kg and though that may seem like a small difference, it’s a very noticeable one. Not only is it a comparatively heavy machine it’s not especially slim either, measuring 34mm thick all the way along. 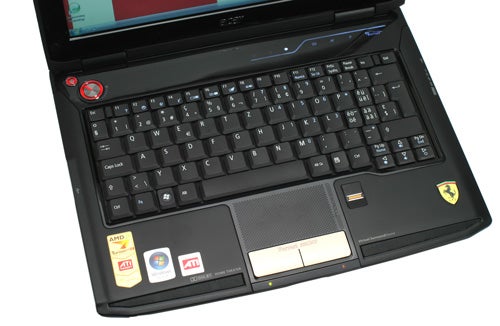 In addition, its comparatively high price puts it up against some very exclusive opposition in the shape of the Sony VAIO TZ Series (see: Sony VAIO VGN-TZ11MN) and the Dell Latitude D430. Of course, neither of these systems can offer the ‘Ferrari’ branding and both use ultra-low voltage CPUs, but the Sony in particular can’t be claimed to be lacking in stature. Indeed, if you’re after a system that uses regular mobile components then the Dell XPS M1330 offers superior design and identical features in a 13.3in chassis that weighs exactly the same, while the Sony SZ Series (see: Sony VAIO VGN-SZ61VN) is another 13.3in machine that even weighs less, at 1.79kg.

So, it’s not the thinnest or lightest notebook in its class but connectivity is good enough. Three USB ports is a decent number for a notebook of this size and though we’d sooner see D-SUB or S-Video replaced with HDMI, it’s not something we see too often in this form factor yet. Besides this you’ll find the usual array of connections, including Ethernet, modem, FireWire and a memory card reader.

Also, on the front, are dual-headphone outputs (one S/PDIF), a microphone line-in, Bluetooth and Wi-Fi on/off switches and an infrared receiver. A short mention must also be made of the on-board audio, which benefits from Dolby Home Theatre audio processing and is better than most notebooks of this size.


Unfortunately, the same can’t be said of the Ferrari 1100’s performance. Our testing was somewhat curtailed due to the fact that our in-house benchmarks are not 64-bit compatible, but even with just PCMark Vantage and our previous experience to go on, it’s clear the Ferrari doesn’t perform to its price point. It proved slower overall than the relatively cheap Dell Inspiron 1525 that had only 2GB of RAM and used an Intel Core 2 Duo T7250 2.0GHz, which isn’t even one of the faster mobile processors Intel produces.

Happily, battery performance is pretty solid and though it couldn’t quite reach the heights of the aforementioned Dell Inspiron 1525, which managed four hours and 10 minutes in the Productivity test, the Ferrari 1100 nonetheless did well. Using a six-cell, 5,800mAh battery and integrated ATI Radeon X1270 it managed a perfectly creditable three hours and 34 minutes in the Productivity test under the standard Balanced power profile. Likewise, a result of four hours and twelve minutes in the low intensity Reader test was excellent, though the high intensity (100 per cent display brightness) DVD playback test provided a more down to earth one hour and 55 minutes.

This decent effort in the battery tests does provide some cheer in an otherwise disappointing performance. But it’s hard to get away from the fact that you’re not really getting £1,400 worth of performance here and though 4GB RAM is always a useful thing to have, no amount of system memory can make up for the shortcomings of the CPU.


Indeed, neither, to our minds, can the prestige of the Ferrari name or the generous feature set. That it’s attractive and feature laiden is without doubt, but if you’re spending this much money on a notebook it needs to be very accomplished and this one isn’t. For its size it’s heavy and bulky and the keyboard is very disappointing compared to those found on competing machines. If you’re mad about Ferrari then it’s still a solid and dependable machine that captures something of the Ferrari design ethic, but at this price and with that name we’d expect a little more than that.


Though attractive on the outside, the Acer Ferrari is let down by the ultimate irony of sluggish performance, a bulky chassis and a poor keyboard. When you’re spending this amount of money, these are things you shouldn’t have to worry about. With plenty of attractive and portable laptops to choose from, you must really like Ferrari to invest. 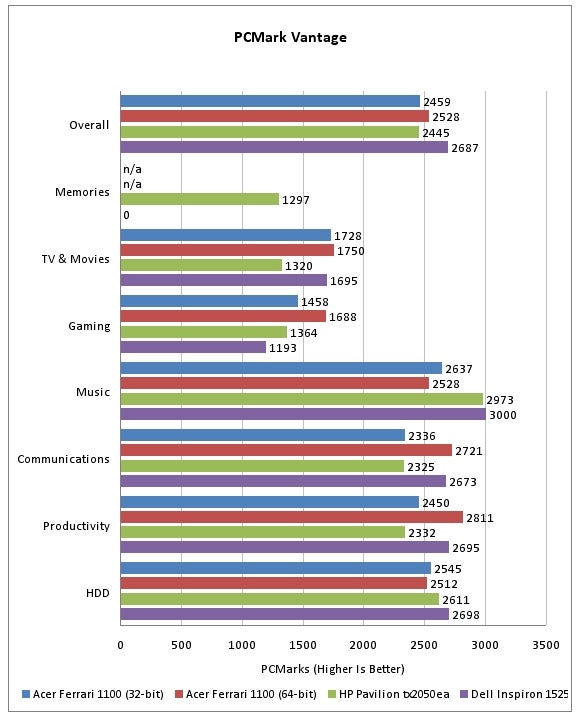 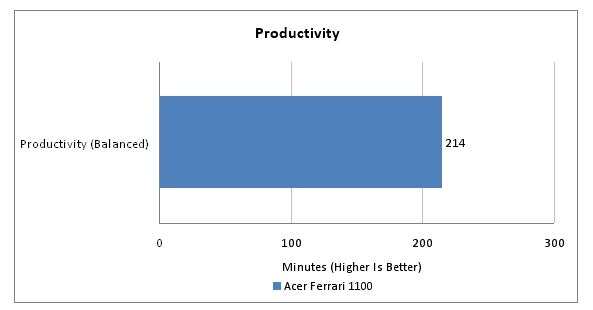