The Acer ET241Y costs just £89, which makes it one of the cheapest ways to get your hands on a 1080p display without resorting to refurbished hardware or the risky backwaters of eBay.

Of course, buying a monitor for less than £100 does temper expectations – I’m not expecting loads of features or outstanding image quality. For everyday home or office use, though, it’s worth seeing if the Acer can deliver the goods and become a legitimate bargain.

The Acer may be affordable, but it still looks smart. The Acer has slim bezels on three sides, which bodes well for single use or multi-monitor setups, and it’s got a brushed metal finish along the bottom edge and a basic, matte plastic stand. It’s not going to turn heads, but it’s not ugly.

The stand has a small indented front edge that allows easier storage for peripherals, pens and loose change, and brushed metal-effect plastic is used at the rear. The Acer’s 24in diagonal means that this panel is physically modest – it’s only 541mm wide and it weighs 3.86kg. 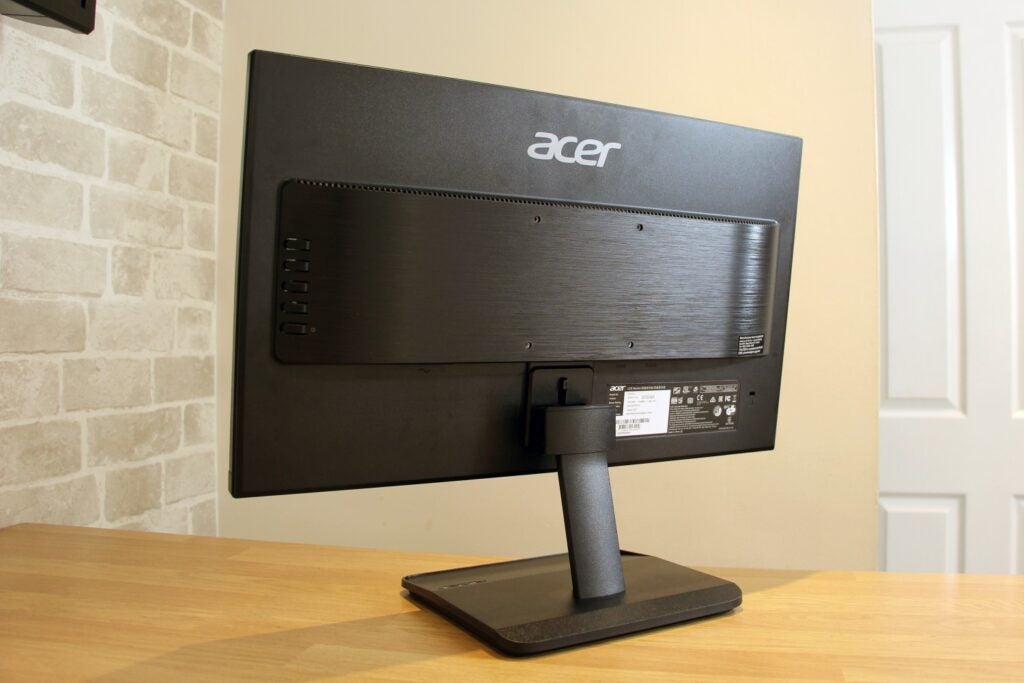 It’ll certainly look good enough in the office or at home, but the budget does mean that the Acer is underwhelming in several areas. Build quality, for instance: the plastic around the rear is weak and flexes far too easily, and the display wobbles on its stand.

The Acer isn’t overflowing with features. It’s only got HDMI and D-SUB connectors, which means you miss out on DisplayPort, USB and audio. Don’t expect much physical versatility, either: the panel has 25 degrees of forwards and backwards tilt and it’s compatible with 100mm VESA mounts, but that’s it – there’s no height adjustment, swivelling or portrait mode. There are also no speakers. 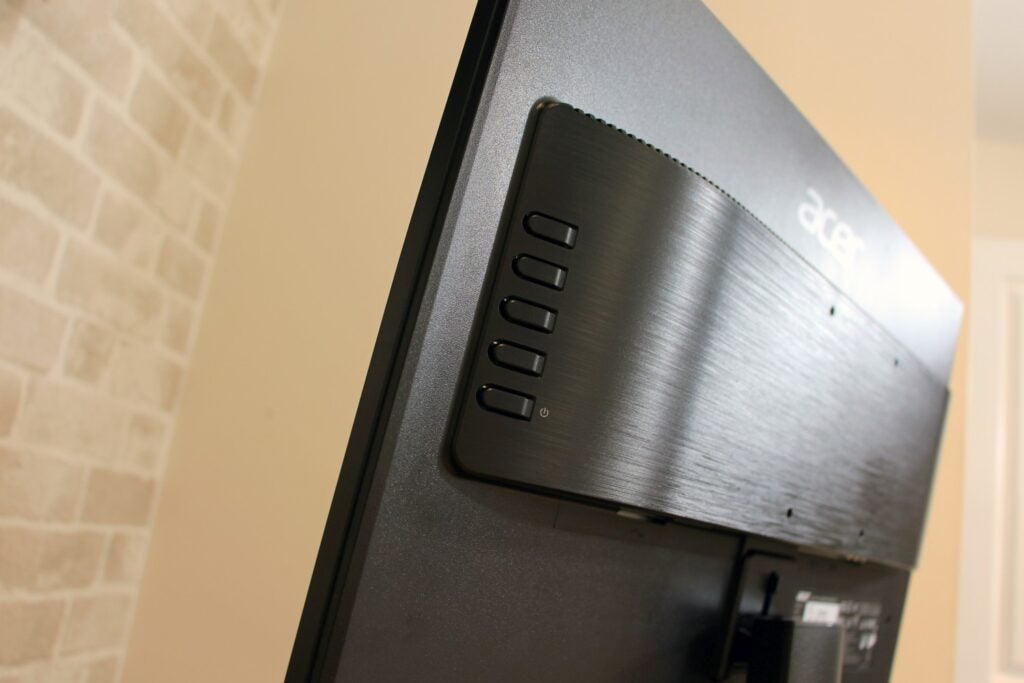 The Acer is easy enough to build, at least – the base uses a single thumbscrew, and the stand slides into the back of the panel. The OSD is reasonably quick and sensibly organised, although the buttons around the rear feel hollow and cheap. At least you’ll likely only head to this menu once, if at all.

On the inside, the Acer uses a 1080p IPS display, which is decent at this price – companies often use cheaper VA or TN hardware instead. Unsurprisingly, the panel’s specification is middling, with 8-bit colour used, a 4ms response time and a refresh rate of just 60Hz with no syncing technology. It goes without saying that this is not a good choice for gamers.

Acer ET241Y Image Quality – Not Great, But Not Terrible Either

The Acer won’t win any awards for its image quality. Out of the box, the Acer’s brightness level of 247 nits is fine for day-to-day use, and its black point of 0.26 nits is reasonable, but not brilliant.

The initial contrast ratio of 950:1 is good enough to deliver enough depth for mainstream computing, web-browsing and office tools, but pricier panels will easily serve up more vibrancy and nuance. Switching from the Acer’s default Warm colour mode to the User option improves the contrast to 1054:1, which helps, but it’s still only a middling result.

The colour results are mediocre, too. Out of the box the Acer delivered a great colour temperature of 6622K but an ordinary Delta E of 4.22. Switching to the User colour mode improves the colour accuracy, but ends up making the panel appear cooler so white colours feature a bluesish tint. 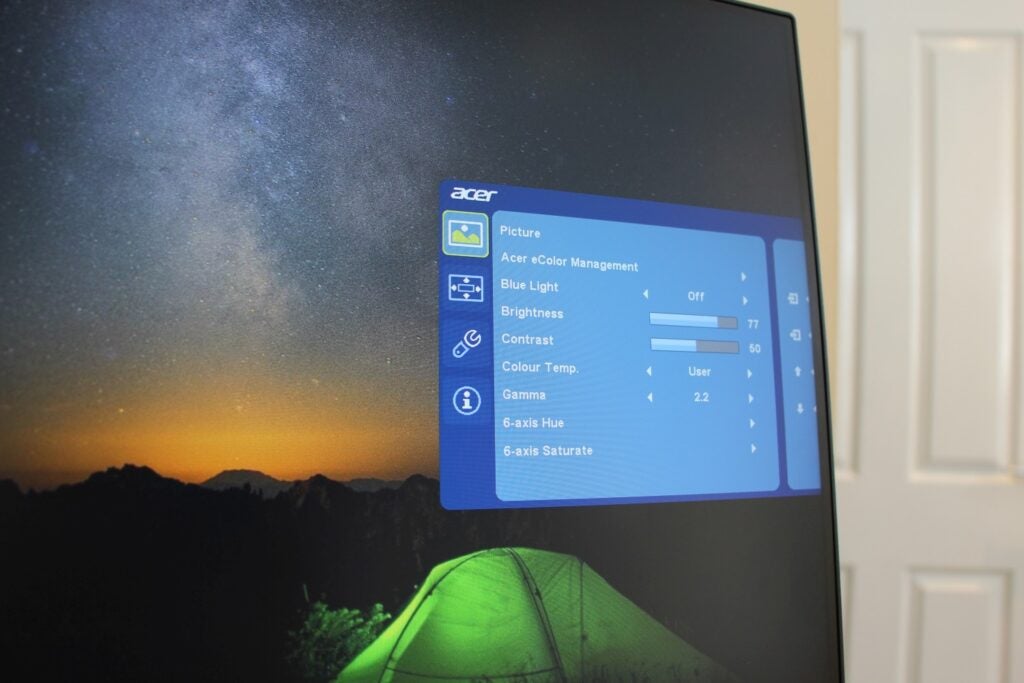 The Acer’s sRGB coverage level of 87% is another mediocre result, but it’s still good enough for everyday computing. Uniformity is better: the panel’s brightness deviated by 15% in the bottom-right corner but in every other sector the backlight only varied by less than 10%.

Don’t expect many extra screen modes here. There are Graphics and Movie options on this display, but neither improve on that User colour mode.

Should you buy the Acer ET241Y?

Acer’s display won’t win any awards for image quality thanks to middling results in most benchmark tests; the contrast, temperature and gamut coverage figures means this panel looks a little insipid. Still, it’s got enough contrast and colour ability to handle office applications, web-browsing and day-to-day use. Similarly, the range of features is narrow, but good enough for basic use – just don’t expect much connectivity or many adjustment options.

The compromises and cut-backs are not ruinous, and they’re totally understandable given the sub-£100 price. If you need a basic monitor on a tight budget, this is a good pick, but alternatives are available with better image quality and connectivity options.