After arriving back in our test labs in June of this year with its first TV since 2007, Acer is today underlining its new commitment to the TV (as opposed to PC monitor) world with not only a new TV model, but a new, self-consciously designer TV model.


Of course, it’s very easy for anyone to just declare that their new TV is ‘designer’ without having anything particularly impressive design-wise to back the statement up. But Acer can back its ‘designer’ claims up in pretty emphatic fashion, since the look of the 23in Acer AT2358ML is the brainchild of no less a style icon than Pininfarina.


For those of you who don’t know your Armani from your Primark, Pininfarina is best known for its work in the car world, having designed such classics as the Ferrari 458 Italia and Maserati GranCabrio. But it does turn its stylish attentions to other things on occasion, such as Guerlain’s Homme aftershave bottle, Primatist speed boats, and now Acer’s AT58 TVs. 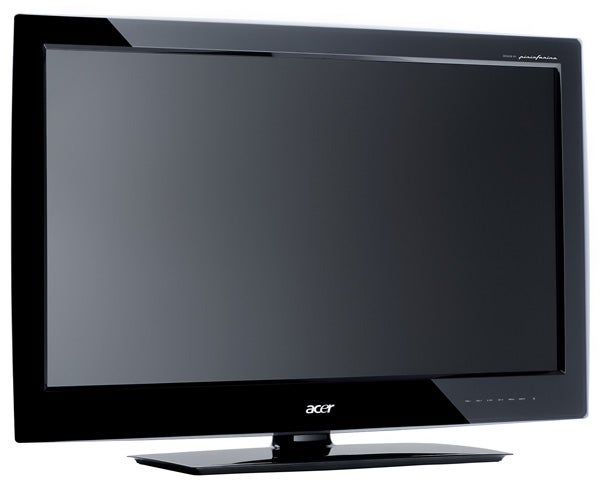 According to Acer’s press blurb on the AT2358ML, Pininfarina’s work on its TVs has resulted in ‘devices… engineered to impress, fascinate, and enchant even the most discriminating consumer’. Ooh.


In fact, now the press release is on a roll, we might as well let it carry on for a bit:


‘Right angles and straight lines are softened to harmonise with their surroundings: the design of Acer AT58 TVs was especially designed by Pininfarina to attract and relax the user. The slightly curved edges recall those of the first televisions that we would switch on furtively when we should have been doing our homework. But the ultra-thin silhouette, the transparent frame, and the glossy pedestal seduce and allude to the technological perfection that this TV has to offer. Moreover, the logo designed by Pininfarina on the frame of the TV is immediately transformed into the prestigious signature of the artist on his painting, granting added value to the work itself.’


The only problem with all this fine, high-fashion talk is that it raises expectations of the AT2358ML being the prettiest TV this side of Bang & Olufsen, or Samsung’s C9000 series. But in reality, to our presumably heathen eyes, it only looks a bit better than all those other affordable small TVs we mentioned earlier! 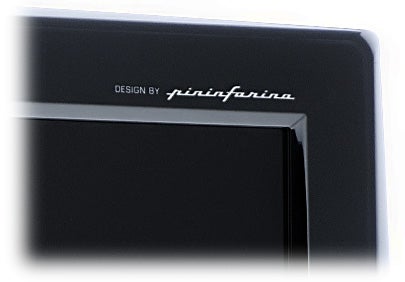 Yes, its finish is glossy. Yes, it has a few subtle curves here and there. Yes, there’s a narrow smokey see-through trim along the TV’s extremities that reminds us of current credible designs from Samsung, LG and Philips. And yes – most significantly – its use of edge LED lighting means that it’s unusually slender round the back for a 23in LCD TV.


But weirdly all these potentially good parts don’t add up to a whole that pushes boundaries or even looks particularly original – except, perhaps, for its slenderness.


Oddly our review sample didn’t carry the Pininfarina logo either, contrary to the press release text and press photographs.


Trying to think more positively about the design, we could imagine it working more effectively on a larger screen – Acer is intending to release a 42in version before Christmas. And it’s also definitely the case that the design approach is better on the white version of the AT2358ML Acer is also selling for a tenner more than the black version we’re testing here.

Just as well, then, that its design is definitely not the AT2358ML’s only selling point. Going back to its edge LED lighting, we should stress that edge LED TVs consistently out-perform CCFL-lit LCD ones in terms of brightness, colour and contrast, so we have hopes that the edge LED system in the AT2358ML will deliver more than just a svelte design and a little power consumption saving.


Also jumping out at us from the AT2358ML’s spec sheet is its full HD resolution – something that’s by no means a given on a set just 23in across. Then there’s the presence of a satisfactory two HDMIs, a D-Sub PC port to enable the TV to double up as a PC monitor, and a USB port able to play back multimedia files in MP3, JPEG and even video flavours. Rather startlingly, it also turns out that this USB port allows you to timeshift TV programmes from the built-in Freeview tuner to supposedly any USB pen drive or external HDD.


The fact that we managed to record from the standard def Freeview tuner to pretty much every USB device we had lying about the office really emphasises just how limiting Panasonic’s current ‘one-brand’ approach to USB recording really is. Especially as you’re free to remove the Acer’s recordings for playback on portable devices – something not permitted with most rival recording systems. 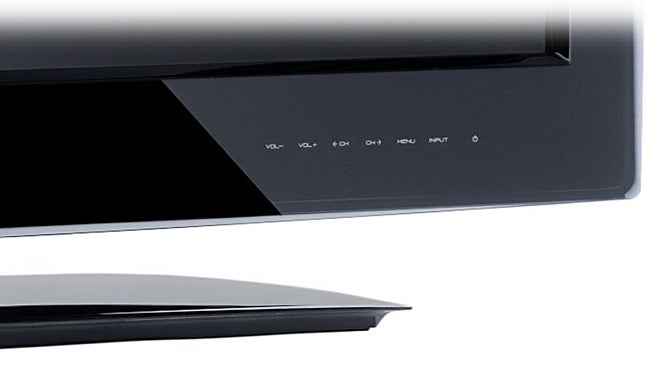 It’s unlikely, of course, that this latter video freedom would have been possible if the AT2358ML had an HD tuner and could record HD broadcasts. But it doesn’t and it can’t, so you’re free to go.


Despite not quite living up to its designer billing as dramatically as we’d hoped, the first time the AT2358ML actively puts a foot wrong is with its remote control. This is a very plasticky, lightweight effort that makes some slightly odd choices when it comes to the placement of some of the key buttons.


The onscreen menus are rather better, being sensibly organised and reasonably nicely designed. Some people might find their text a bit small for comfort, but this should be solved by, um, just moving a bit closer to the screen.


It’s no great surprise given the AT2358ML’s price and size to find it lacking in pretty much all image processing bar a basic system for rescaling standard definition material to the full HD screen. But there are one or two tweaks of note within a rather optimistically named ‘Advanced’ picture submenu, namely a series of noise reduction options, an impressively flexible backlight adjustment, a fleshtone adjustment, and the facility to turn on or off an auto contrast system. These latter tools are, of course, commonplace in the large-screen TV market, but they’re not a given at the sub-26in level.


It doesn’t take long watching the AT2358ML in action to start feeling as if it hasn’t made the most of its edge LED lighting potential. In fact, in many ways pictures look pretty similar to what we’d expect to see on a straight CCFL LCD TV.

For a start, black levels are pretty average. Even with the backlight nudged down to pretty much zero there’s a marked pall of greyness over parts of the picture that are supposed to look black. And with the backlight set this low, it also has to be said that dark pictures lack vibrancy and shadow detail.


We personally found that using a backlight setting of around 30-40 gave the best balance of black level and brightness, but we couldn’t arrive at any setting for the picture that might produce a contrast performance to match our edge LED hopes.


It also has to be said that colours aren’t as vibrant and punchy as we see with many big-screen edge LED TVs, and colour tones don’t always look entirely natural when watching standard definition fare.


Pictures don’t look especially sharp either. This isn’t so bad that the set can’t clearly reproduce the difference between standard and high definition sources, especially with relatively static footage. But pretty evident judder and motion blur can certainly reduce the sense of crispness during action scenes. 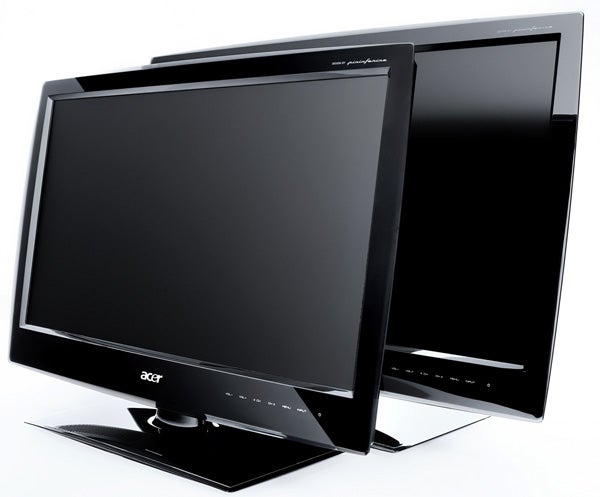 We’re all too aware at this point that we’ve been pretty negative about the Acer AT2358ML’s pictures, so it’s high time we introduced some balance. For the reality is that while the issues we’ve discussed so far have disappointed us in the context of the TV’s edge LED lighting, if you consider the set against the wider small-screen LCD marketplace, its pictures really aren’t bad.


The set is also not as bad at upscaling standard definition fare from its tuner as we’d expected, in that the picture doesn’t look unduly soft, and while MPEG noise is certainly apparent with low-quality channels, it’s not thoughtlessly exaggerated in the upscaling process, as we’ve seen happen all too often with budget, small-screen TVs.


Another picture plus is that the backlight is more consistent than we see with many small LCD TVs. There’s a very faint line of light ‘seepage’ around the outermost centimetre or so of the picture. But this is only visible during pretty much completely black footage, and is far less distracting than the big ‘bubbles’ of light inconsistency that are currently commonplace in the LCD marketplace.


Unfortunately for Acer, though, we can’t manage to finish our review of the AT2358ML on a high. For its sound quality is very uninspiring indeed, delivering exactly the sort of compressed, bass-free, muddy little audio performance we’re depressingly starting to expect almost as standard from small LCD TVs. The set struggles to handle fairly tame stuff like ”Emmerdale”, in fact, so you can imagine the problems you’ll encounter during the opening beach assault scenes of ”Saving Private Ryan”.


Our love of TV picture quality pretty much by default prevents us really raving about the Acer AT2358ML, for its imaging flaws are numerous and obvious. And it compounds them with an audio performance that sounds thin and muddy even under relatively little strain.


However, it would be grossly unfair to just write the set off. For its pictures are actually decent enough in the context of the sub-£300 market as a whole, it has a cute (though not revolutionary) design, and best of all its multimedia and PVR features are surprisingly comprehensive, making it a potentially excellent affordable second-room option for people who value multimedia convenience, cheap pricing and to some extent design ahead of raw AV quality.