If you’ve been tempted by netbooks but find the performance and form-factor too inflexible, Intel’s CULV (consumer ultra-low voltage) platform is the perfect tonic. Indeed, this equally applies to current netbooks owners, who might find CULV machines and AMD’s competing Athlon Neo platform the ideal upgrade paths to something that has similar levels of portability, but with more capability. 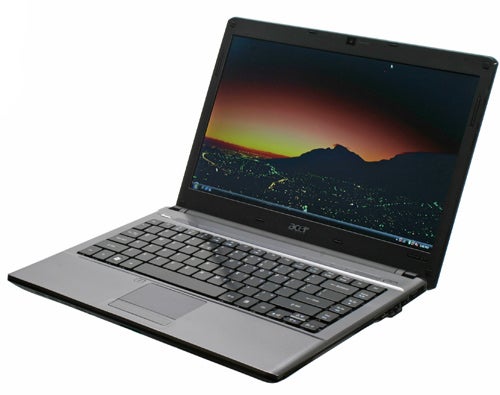 Perhaps the best example of a CULV machine is the Acer Aspire Timeline 4810T, which received a Recommended Award and a well deserved 10/10 for value back in May. Now we’re looking at another version of the 4810T, the 4810T-353, which for £200 less drops a core from the CPU and downgrades the hard drive. This results in a machine that costs just £549.99 yet maintains many of the benefits of its more expensive sibling.


This starts with the chassis which is (obviously) exactly the same. Despite being targeted at consumers the 4810T is a fairly conservative looking machine. Indeed, were it not for the glossy screen, one could easily assume it were a business laptop. This doesn’t make it the most exciting thing to behold, but it does mean it’s far more durable than 99 per cent of laptops that are beholden to glossy, dust-attracting, scratch-prone plastic. 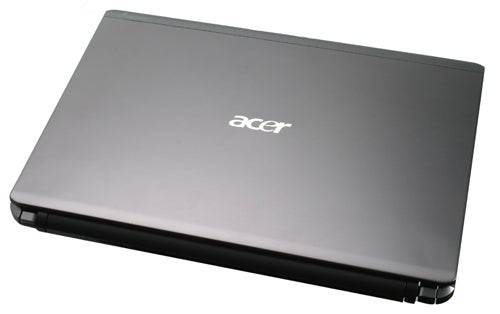 This is particularly true of the aluminium lid, which adds a reassuring level of sturdiness. Indeed, overall the build quality far outstrips what you might imagine for a laptop that costs £550, with good quality plastics used throughout. In fact, the 4810T feels positively brick-like compared to the decidedly flimsy MSI X-Slim X340, though it does weigh more – just under 2.0kg. If weight is a concern the 1.6kg 3810T, the 13in version, might be worth looking at.


Connectivity is good but lacks a few niceties like eSATA or an ExpressCard slot. You do, however, get three USB ports, VGA and HDMI for video, line-in and line-out connections for audio, a Gigabit Ethernet port and a 5-in-1 card reader. This is still far more than your typical netbook, so only very picky types (like us) could possibly complain. 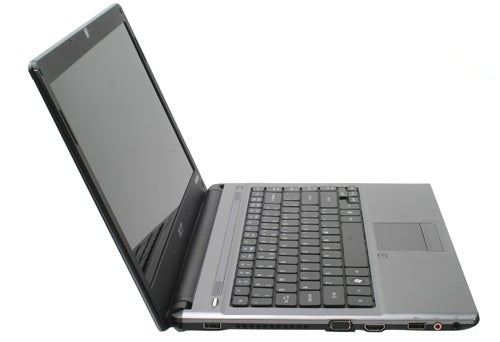 Another underwhelming feature are the integrated speakers, which are too tinny and lacking in power to be suitable for anything but basic audio needs. However, Acer seems to have thought ahead here by licensing Dolby Sound Room processing. This includes the audio firm’s excellent headphone surround sound virtualisation, Dolby Headphone. Given this is a system meant to be used on the move this is arguably more important than the integrated speakers, which could easily be substituted for some speakers when at home.

Dotted around the speakers are shortcut buttons for various functions. On the far right is a dedicated button for ejecting the DVD drive and to the left are touch controls for toggling wireless radios, launching Acer’s backup solution and its battery life enhancing power management.

We wonder whether these could have been utilised better; how often are you really going to use a dedicated backup button? However, they work well enough and secondary key functions are logically arranged around the keyboard, with the Home, Page Up/Down and End keys dedicated to playback controls and the cursor keys to brightness and volume.


One of the more unusual features of the entire Timeline series (not just the 4810T) is the keyboard, since Acer appears to have created yet another variation on the popular isolation-style keyboard – just without the physical divides between each key. Whatever one calls this it’s definitely a success. Keys have a lovely precise action and the layout is pretty much spot on. Anyone who works on documents a lot will enjoy using the 4810T. 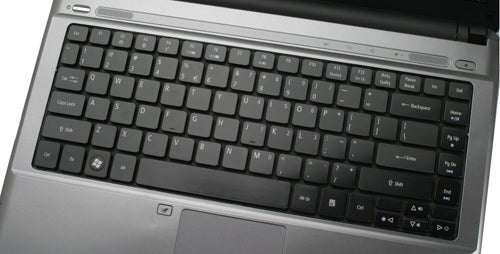 That’s provided you turn the touchpad off first, since Acer is yet another manufacturer to plonk it right in the middle of the machine where it constantly obstructs typing. Much like the HP Pavilion dv3-2055ea, which also suffers this issue, there’s a dedicated button to deactivate the pad, but putting it in the right place to start with would be preferable!


Once you get over this irritation, though, the touchpad is a very good one – it’s just the right size and its buttons are firm and responsive. It also has the added benefit of multi-touch support. It isn’t quite as elegant as Apple’s MacBook implementation, but it’s a nice addition nonetheless – hopefully Windows 7 will make such features far more useful and enjoyable. 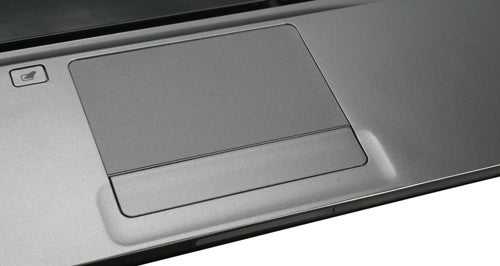 While the inclusion of a multi-touch touchpad is impressive, one area where Acer has saved a few pennies is in the screen. As is the modern trend it’s a 16:9 aspect effort with a 1,366 x 768 native resolution; it’s also LED backlit. For general use it is fine – it’s bright and doesn’t suffer from noticeable backlight bleed. However, viewing angles aren’t the best, colour accuracy can only be described as ‘okay’ and very small text lacks a little sharpness. Few of these issues, apart from the viewing angles, are likely to bother 99 per cent of people, but we’ve seen better.

Inside, the 4810T-353 is quite similar to its more expensive sibling, the main differences being the CPU and hard drive. This means you get only a single-core Intel Core 2 Solo SU3500, which runs at 1.4GHz and has 3MB L2 Cache – the same as before, just with one less core. Storage, meanwhile, is downgraded from a 320GB hard drive to 250GB.

Even with these compromises you’re left with an impressively specified machine. For networking you get both Gigabit Ethernet and Draft-N Wi-Fi, not to mention Bluetooth. There’s no shortage of system memory either, with 3GB of 1,066MHz DDR3 RAM on offer.


It’s only really the graphics that let the side down, since it’s of the Intel integrated variety. This means any meaningful GPU acceleration for video is out of the question, though there’s talk that a version of Media Player Classic Home Cinema could at least support h.264 acceleration via DirectX Video Acceleration (DXVA) soon. Until then, though, 720p video is just about playable, though it does nearly max out the CPU. Gaming is also out of the question, not that anyone should buy a system like this with that in mind.

In a system like this, compromise is the order of the day – as the PCMark Vantage results demonstrate. Losing the second core has a significant impact on performance, with the dual-core 4810T coming out 40 per cent faster overall. A more relevant comparison, however, would be the HP Pavilion dv2-1030ea – the only Athlon Neo powered system to date. It costs around the same, offers similar features and also uses a single-core processor. Both systems are very well matched, with some tests resulting in identical scores!


On a more subjective level the Acer copes with general duties just fine and the CULV processor is clearly more competent than Atom. It’s only when you try to run several applications at once that things begin to slow-down, and video editing and other CPU intensive tasks are clearly a non-starter. Light image editing should be okay, but this is a system better suited to productivity tasks than heavy-duty multimedia. 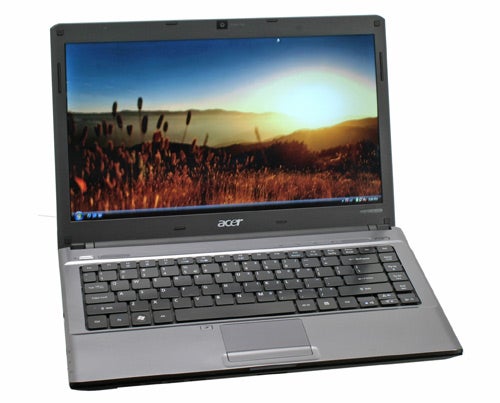 It’s battery life where the Acers prove their worth, though. While the 4810T-353 doesn’t quite match the version we reviewed in May, at six hours and 18 minutes in Productivity and six hours 43 minutes in the Reader test, it still offers outstanding longevity. It’s just a shame the HP doesn’t come with a higher capacity battery, since without one it’s impossible to get a like-for-like comparison of the Intel and AMD based systems.


While performance suffers in comparison to the dual-core version and HD video is still challenging, this version of the 4810T still comes recommended. For the price it offers a tempting array of features, a portable and great to use chassis, and battery life that makes it perfect for mobile people on a tight budget.

You can see there’s a big difference between this version of the 4810T and the dual-core version, with the overall score coming out 40 per cent lower. However the Acer and the HP, both of which use low-power single-core processors, perform very similarly.

Over six hours in the MobileMark 2007 Productivity test is excellent, though it doesn’t quite match the previous 4810T. Here we see the weak battery of the HP hindering its performance.

These results are continued in the low-intensity Reader test. Unfortunately we don’t have DVD results for this product due to a testing bug.