When it comes to replacing a desktop PC with a more elegant modern solution there are many approaches one can take. Some might prefer a semi-portable 15 or 16-inch laptop, others a more permanent all-in-one PC such as the Apple iMac or MSI Wind Top AE2220 Hi-Fi. One other choice is a hybrid of the two: a 17 or 18-inch laptop that’s so large as to be essentially non-portable, but can still be stowed away discreetly when the need arises or thrown in the back of a car when on the move. If the latter is your preference, the Acer Aspire Ethos 8943G might be for you. 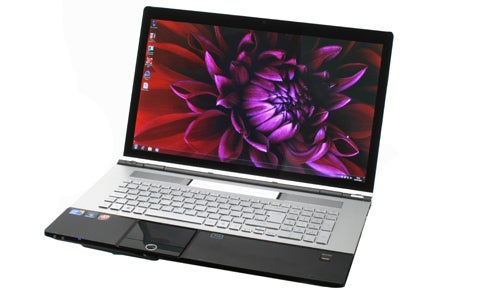 With an 18.4-inch screen and a scale busting 4.6kg weight, the 8943G isn’t exactly a featherweight. As such, though you can at least move it around, the Acer won’t be going anywhere in a hurry. Not that there’s anything sluggish about the hardware, however. A quad-core Intel Core i7 processor is the star of the show, which starts at 1.6GHz but can be ‘turbo clocked’ to up to 2.8GHz depending on how the load is spread. Just in case this wasn’t enough this particular version has 12GB of DDR3 RAM as well.


This goes some way to explaining this model’s £2,000 asking price, but there’s more. You also get two 640GB hard drives (totalling 1.28GB), all the Wi-Fi, Ethernet and Bluetooth you could need, and a 1GB ATI Mobility Radeon HD 5850 that should offer some decent gaming performance. Also included is a TV Tuner, with a remote to go with it, and a Blu-ray player. If this is all a bit rich for your blood then there’s a cheaper £1,200 version, which ejects a hard drive, downgrades the graphics and has a more sensible 4GB of RAM. 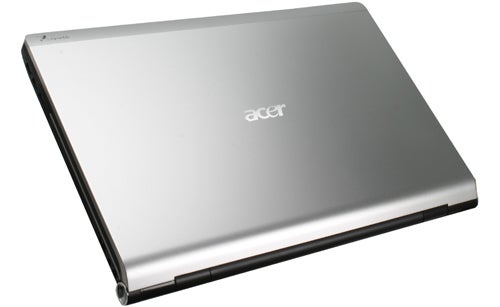 It’s not just the hardware that makes the 8923G expensive; Acer has also invested in the design and materials to go with it. Its resultant exploits are a mixture of sumptuous, classy design and less auspicious tackiness. We love the brushed metal lid and body, and it works well with the plainer dark-grey palm-rest. Unfortunately things are marred by one or two ill-advised moments of naff-ness.


For example, Acer has used tacky looking faux-chrome in several spots, such as on the end of the hinges, around the middle click button on the touchpad and the volume dial on the front edge. The speakers above the keyboard look overly fussy, too. Our ire is especially reserved, however, for the piano-black touchpad. In its muted, classy surroundings, it’s an eye-sore. 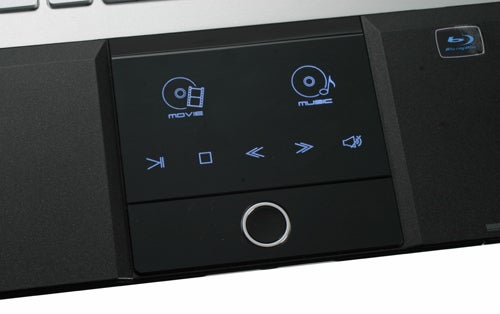 However it’s an eye-sore with a trick up its sleeve, as hitting the middle button activates a set of backlit media controls in the touchpad. Of all the various attempts at clever media controls Acer has attempted – and there’s been a few – this is easily the best. It’s neat, unobtrusive and effective, though the over-stylised icons could with some work.

Despite one or two niggles in the design, quality is still abundant elsewhere and the best example of this is the keyboard. Not only do the silver, isolated keys look very cool, they sport outstanding actions that are crisp, deep and reassuring. An excellent layout, which includes a full-size number pad, only help matters further. We can scarcely remember an Acer laptop that was this nice to work on!

We’ve already highlighted the touchpad and its somewhat discordant appearance, but it’s not just the appearance that’s lacking. It’s highly lacquered finish is rather too sticky. It’s also a fingerprint magnet, which isn’t a great quality in something you touch with your finger all the time. On the plus side the two buttons have solid, unfussy actions and again those neat multimedia controls make up for a lot.


Where multimedia machines, particularly ones the size of the Acer, must excel is connectivity and their audio-visual performance. On the connectivity front the 8943G doesn’t disappoint, offering up all the usual necessities (e.g. HDMI, VGA, and a memory card reader) but adding a plentiful five USB ports – one of which doubles up as an eSATA socket. 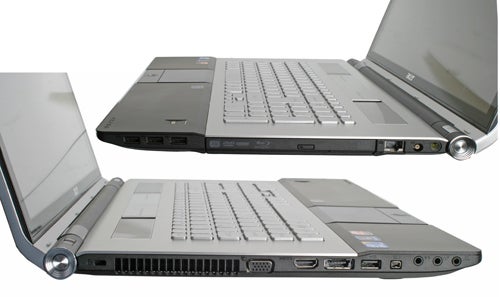 There’s an IR receiver on the front edge for the provided remote, which is a useable – if rather functional looking – effort, and a TV tuner input for hooking up an aerial feed. A mini-FireWire port is also included; though considering the massive price Acer would have been well-advised to add USB 3.0. Moreover, there’s no ExpressCard slot, so you can’t add a USB 3.0 adapter (or any other expansion card) – see: USB 3.0: What Is It and Do You Want It? for examples of such adapters. 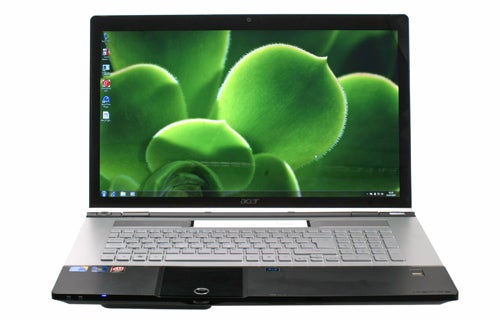 Initially, the 18.4in, 1,920 x 1,080 resolution display looks promising. It uses two CCFL backlights, as opposed to the usual one, to give a nice strong even lighting to its vastness. The addition of a second lamp also does an excellent job of adding richness to colours and dynamic range to the screen’s output. Thanks to the size and resolution of the display, it’s also extremely sharp and consequently HD videos and photos look very good. Things are only tarnished by the mediocre viewing angles, which don’t impact normal viewing but are quickly evident for anyone sitting a little off-centre. It’s a shame as otherwise the screen does a fine job of showing off Blu-ray content.

More perplexing are the speakers, which despite the touted “5.1 cinematic surround” and addition of a mid-range driver are distinctly underwhelming. Given the right source they produce reasonable clarity and response, but anything remotely challenging quickly generates obvious distortion. Turn off the included Dolby Home Theatre processing and the cause is quickly evident: without it the speakers sound rubbish. Good quality processing can enhance speakers, but the 8943G is far too reliant on Dolby’s jiggery-pokery.

As the 8943G costs nearly £2,000 you’d expect it to perform extremely well. It does, to an extent, but it’s not as if you get significantly more performance for the money. For example, the Toshiba Satellite L650-10G isn’t embarrassed in our system performance testing, and it costs a fraction of the price.

Of course, the Acer does have the advantage of a quad-core processor, and if you want to edit HD camcorder footage then this will come in handy. However, evidently the 12GB of RAM doesn’t help system performance much and we find it hard to believe any home user would need so much memory. As the Asus G73Jh demonstrates a faster processor or better graphics would be more beneficial, and it’s a good £300 cheaper too.


Unsurprisingly, Asus’ gaming machine outperforms the Acer in the gaming tests, though the latter still performs reasonably well. TrackMania Nations didn’t pose any problems, producing a silky smooth 90.6fps. We upped the resolution to 1,920 x 1,080 and set everything to high and we still got playable frame rates. Likewise in STALKER: Call of Pripyat, which ran at 50.9fps at medium detail, there’s enough performance spare to improve graphical quality.

We routinely point out that battery life is fairly unimportant in machines this size, but the Acer still produces good results. In the productivity test it lasted nearly three and a half hours, a DVD at 100 per cent brightness ran for slightly less than two hours. Nonetheless, given the 8943G weighs 4.6kg, such battery life is unlikely to be needed unless there’s a power cut!

And unfortunately this gets to the nub of the 8943G’s problems. It has many good elements, but taken as a whole it fails to convince. Its unbalanced specification is largely at fault here, but there are several niggling faults that also undermine it. Given the choice we’d sooner recommend something like the Asus G73Jh, or an all-in-one PC that offers similar features at a more competitive price.


It has the features and no shortage of design flair, but the Acer Aspire Ethos 8943G is ultimately a bittersweet affair. It might make a better case for itself in cheaper configurations, but there are still fundamental issues to iron out.