With the advent of Windows 7 a whole slew of multi-touch-enabled devices coming to market, such as the Dell SX2210T monitor and the Wacom Bamboo Touch, of which we have a review coming soon. Today, however, we’re looking at the Acer Aspire 5738PG laptop, which adds its very own multi-touch enabled touch-screen to mix.


Mind you, Acer doesn’t seem to have expended much effort in creating this product. Physically the chassis is absolutely identical to that of the Acer Aspire 5536 and many other Acer models besides. This means you get an attractive laptop, sporting a glossy, fingerprint-loving dark-blue finish on the lid, a piano-black screen-bezel, matte black keyboard and gunmetal grey palm rest. 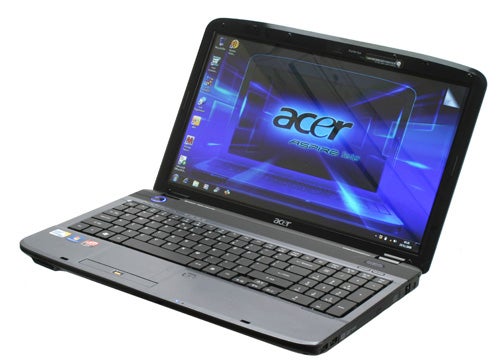 Build quality is reasonably good, but the change to touch interaction does raise one issue that wasn’t a real problem previously. Since this chassis hasn’t been designed specifically with touch interaction in mind, the hinge-action on the screen isn’t sturdy enough to prevent it wobbling after tapping it. This is very annoying and underlines the impression that the 5738PG’s touch implementation is something of an afterthought.


We’ll return to such concerns later, but first a tour of machine reveals the large, blue-backlit power button that’s become a staple of Aspire laptops, below which are physical toggle buttons for Wi-Fi, Bluetooth (though this particular laptop doesn’t actually have a Bluetooth card inside) and Acer’s own backup solution. 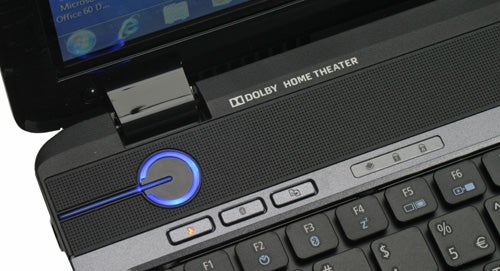 On the opposite side of these is a very useful Launch Manager button which, as its name suggests, can be used to quickly launch applications such as the calculator or any executable you care to add. Below this are physical volume controls, though you also have the option of using keyboard shortcuts.


As for the isolation-style keyboard itself, it’s quite pleasant to use. Feedback is decent if rather shallow, the matte keys emit a solid click when pressed and the layout is as it should be. Acer has even found room for a number pad with a full-size 0/Insert key, which is always useful. 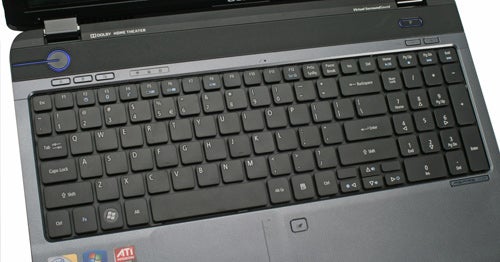 Below the keyboard, the recessed touchpad is ideally positioned to not interfere with typing, but should you find otherwise, it can be switched off using the dedicated button beside it. Like the screen the touchpad is multi-touch enabled and it’s large and responsive enough to make this worthwhile.


Acer seems to have heard our complaints about the touchpad’s buttons on previous machines, too. While we’re still dealing with a single rocker switch, both buttons offer excellent, consistent feedback – a marked improvement on the stiff, awkward efforts of recent times. Between these buttons is nestled a fingerprint-scanner, which is a useful if non-essential feature on a consumer laptop.

Connectivity is fairly good though eSATA and USB charging aren’t supported. What you do get is four USB ports (two on the left, two on the right); HDMI and VGA for video; three 3.5mm audio jacks for analogue or digital surround sound support and the obligatory memory card reader. There’s even a modem jack, just in case you still need one of those.

As we’re finding more and more often on laptops, the Aspire 5738PG’s integrated speakers aren’t cringe-worthy. They’re perfectly adequate for the occasional film, casual games and music and there’s even Dolby Home Theatre processing to get the best out of headphones or external speakers, though bass is still lacking and the volume could be greater. If you do want good speakers on a laptop, we’d recommend going for a Toshiba such as the Satellite A500, though Acer does offer better speakers on some more expensive models as well. 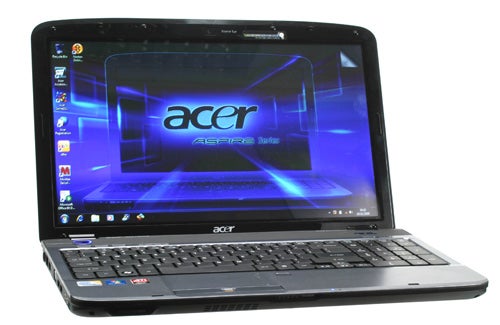 Also in common with many laptops, the 5738PG’s 16:9, 15.6in screen is fairly average. A resolution of 1,366 x 768 is pretty much expected for a laptop display of this size and unfortunately it sports the same glossy finish as most of its counterparts, leading to distracting reflections with any ambient lighting.


On the plus side, the touch technology seems to have no negative effects noticeable in everyday use. Backlighting is even with little sign of backlight bleed and banding is minimal. Viewing angles are mediocre though, affected by a bit more contrast shift than we’re used to. This in turn makes greyscale performance rather poor as you’re losing out on quite a bit of either light or dark detail depending on the screen’s angle. Sharpness was also slightly sub-par, making very small fonts tiring to read.

Internally this is a solid but not especially exciting machine. For processing duties we have an Intel Core 2 Duo T6600 running at 2.2GHz. It’s no Core i7 as found in the Novatech’s X70 CA Pro, but it’s more than quick enough for ordinary folk and should ensure okay battery life, too. This CPU is backed by 4GB of RAM, which is plenty to keep the installed 64-bit version of Windows 7 happy. Having a 64-bit OS has a significant impact on performance, too, as evidenced by the high scores in PCMark Vantage, though the real world impact might not be as great as it suggests.


For storage there’s a 320GB 5,400rpm hard drive, which is pretty much standard fare, though at this price point (around £700) we would have liked to have seen a 500GB disk. As mentioned before Bluetooth is absent, but to make up that for you go get Wireless-N Wi-Fi. 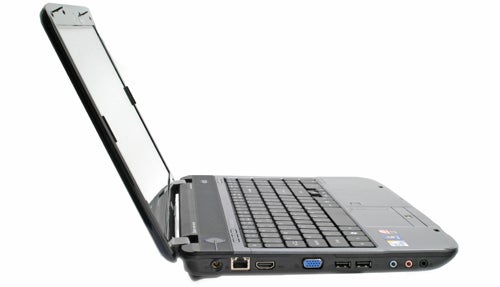 A highlight of the Aspire 5738PG is its graphics chip, in this case an ATI Radeon HD 4570 with 512MB of dedicated memory. While we wouldn’t class it as a gaming card by any stretch, it’s certainly up to a few older titles. In our standard laptop graphics test using TrackMania Nations Forever, for example, the 4570 scored 44fps on medium detail and 26.8fps on high at the screen’s native resolution.


Even Call of Duty 4 was just about playable, returning an average of 26fps at 1,366 x 768 with details set to maximum. We did notice one odd bug, which was that the touchpad would not respond at the same time as keys were being pressed in the game, but attaching a mouse fixed the problem and you’d want to use one anyway.

Despite the 5738PG’s relatively powerful discrete graphics, battery life is fairly good thanks to the 4,400mAh (46 Watt-hour) capacity battery. In MobileMark’s Productivity benchmark, for example, the 5738PG managed a decent three hours and six minutes, while two hours and ten minutes under the DVD test with screen brightness at maximum (though it’s perfectly visible at lower settings) is long enough to watch most films. 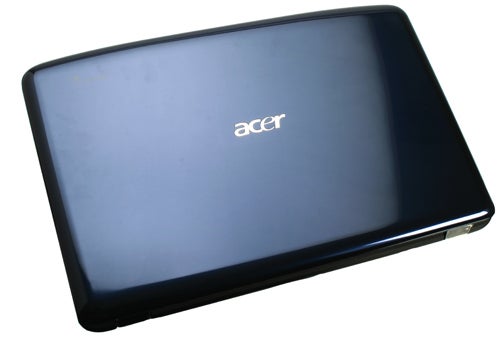 Now onto arguably the most interesting element, or at least the one that makes it stand out: the touch-screen. If you can get past the screen’s slight wobble, the multi-touch implementation works just fine. Obviously the physical experience isn’t going to rival using an iPhone, for example, but the software actually has far more to do with this than anything.


Regardless of Windows 7 being fully multi-touch compatible, the fact remains that as essentially an evolution of Vista (itself arguably a mere update of XP in terms of interface), this OS was not designed from the ground up with touch in mind. It’s simply impossible to accurately and consistently select and use some of the relatively small checkboxes, menus and buttons the 5738PG’s screen resolution provides under Windows 7.


Acer has worked around this by creating its TouchPortal. This can be accessed either from the Start Menu or by tapping in the top right corner of the laptop’s screen, though the latter solution proved irritatingly unresponsive. Thankfully this can’t be said of the interface, which covers the basics and is relatively intuitive, though its benefits on a machine such as this aren’t immediately obvious. 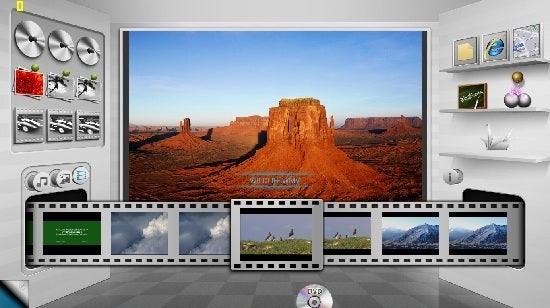 There are separate ‘buttons’ to the left for all your media, including photos, videos and music, which the software scans for on all connected devices when you press one. To the right you can access file browsing or a modified overlay version of Internet Explorer. Below these are the only applications where touch makes sense above a mouse though: games. The best example here is two-player Pong, where each player controls their paddle with a finger. This is genuinely more fun than using a mouse or keyboard, though at any angle it’s awkward on a non-convertible display and would make much more sense on a Tablet PC or similar.


This mixed experience would be forgivable were you not paying a premium, but you do. At £700 the 5738PG is getting on for £200 more than a non-touch-screen equivalent, which is far too much to ask given the implementation feels like a gimmicky afterthought. 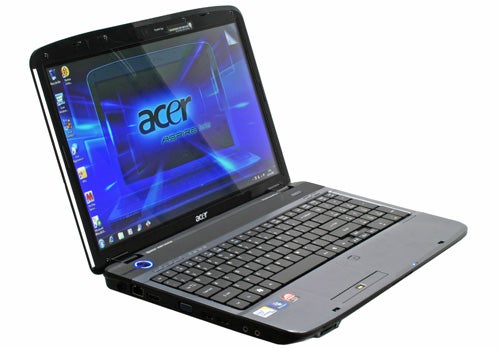 
As a laptop, the 5738PG is fine. However, considering you’re paying a £200 premium for multi-touch functionality that feels like an afterthought, on a wobbly, non-convertible screen and with an OS that’s still easier to operate using a keyboard and mouse, it’s hard to recommend it.

Unusually high scores for its hardware are partially attributable to running a 64-bit version of Windows 7. Overall this is very good performer, though, even if these results exaggerate this to a degree.

Battery performance is quite good considering the discrete graphics and should satisfy most users. Most films shouldn’t be a problem, especially as the screen is easily usable below 100 per cent brightness we test at.