Acer is an unstoppable behemoth when it comes to laptops, constantly bringing out new models to cater for almost every price band. The 15.6in Aspire 5551 is so new it doesn’t even show up on Acer’s website, and it’s powered by one of AMD’s latest tri-core Phenom II X3 mobile processors – the N830 running at 2.1GHz.


Aside from this and its textured lid, there’s nothing too unsual about the 5551. Naturally it features AMD/ATI graphics in the form of a Mobility Radeon HD 4250, while Windows 7 Home Premium will take full advantage of the 4GB of provided DDR3 memory. You also get a 320GB hard drive DVD-Rewriter. Wi-Fi N is practically guaranteed these days, but Bluetooth is absent. 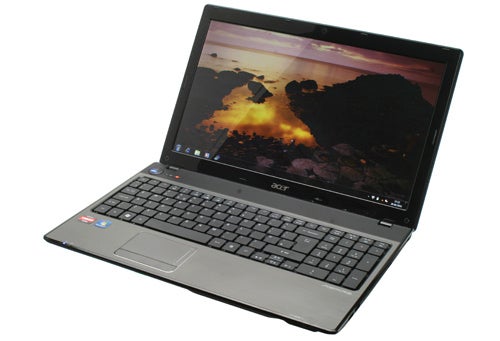 When it comes to design the Aspire 5551 is unremarkable but generally attractive. It lacks the brushed metal lid of some of its siblings such as the Aspire Timeline 4810T, but at least Acer hasn’t subjected us to the usual glossy fingerprint magnet that many rivals possess. Instead it features a heavily textured shiny finish that’s remarkably similar and equally rugged to that found on the Sony VAIO VGN-NS20. 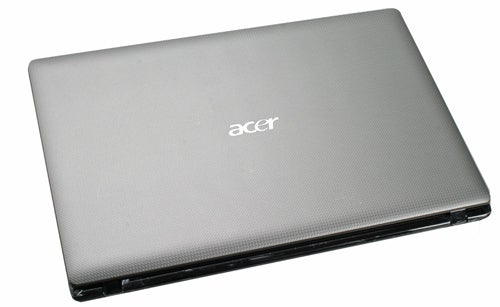 This positive design direction continues on the laptop’s interior, where the only glossy elements are the screen’s bezel (only broken by the unobtrusive, chrome-ringed 1.3MP webcam) and a very narrow strip around the edges of the machine’s bottom half. As is so often the case though, the near mirror-like reflectivity of the screen will be a nightmare on sunny days when working on the train, for instance.


Above the matt black keyboard is a black patterned speaker section, while the keyboard’s surround and palm rest are finished in faux brushed gunmetal that is both pleasant to the touch and does a good job of hiding fingerprints or marks from sweaty palms. The power button, with its signature power-icon shape, sports a not overly bright blue LED that we rather like, and again highlights the overall understated design. 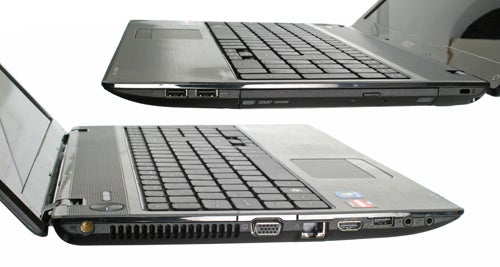 Like its specifications, this laptop’s connectivity is adequate but not exciting. Three USB ports are joined by digital (HDMI) and analogue (VGA) video outputs, 3.5mm headphone and microphone jacks (with the former doubling as a digital audio output), a memory card reader, and a Gigabit Ethernet port.

Getting onto usability, we’re not disappointed by the Aspire 5551’s matt-black, isolation keyboard. It has an excellent layout with a proper UK-style Enter key and a full number pad with a full-size Insert/0 key. Despite their shallow appearance, the keys offer a good amount of travel with reasonably positive feedback – though it’s not quite as well-defined as on some earlier Aspire models we looked at. There’s also some flex towards the centre, but it’s not enough to spoil a generally pleasant typing experience.

With its large, smooth surface the multi-gesture touchpad is likewise a pleasure to use, and its positioning means it never interferes with typing. Both of the pad’s buttons are incorporated into a single rocker switch, which is just a tad too stiff for our liking but still usable. 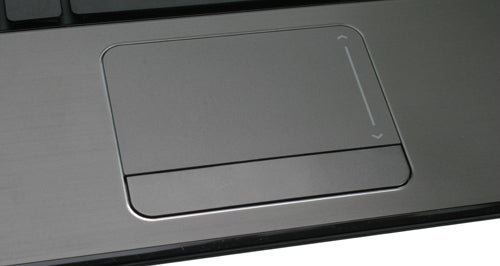 As far as the 15.6in LED-backlit screen goes, aside from its aforementioned glossy finish it sports a 1,366 x 768 resolution. In a reversal of the usual bias, our greyscale tests revealed that it favoured light detail over dark, giving you pure whites at the cost of dark detail in games and films. Viewing angles are also pretty mediocre, with vertical ones slightly above average but horizontal ones letting the side down, leaving you with quite a narrow field of view.


On the positives side there is minimal banding, backlighting is even without distracting light-bleed, and excellent sharpness results in good legibility of small fonts. As with most laptop displays, that of the Aspire 5551 is absolutely fine for daily productivity, but it’s not the best for entertainment and certainly not suited to graphical work. 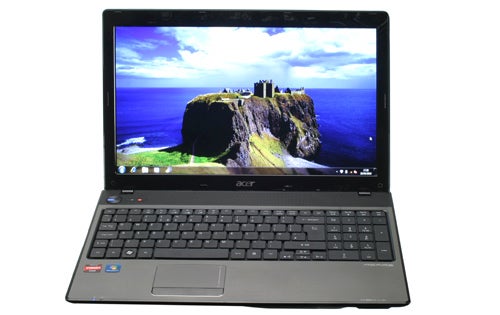 Acer’s 3D Sonic speakers are more impressive. Aside from some distortion at their maximum volume and a slight lack of bass that’s common to most laptop efforts, they produce a decent soundstage with a bit of punch and clarity. A good set of headphones will give far better performance, but here that’s a recommendation rather than a necessity.

At the heart of the Aspire 5551 beats AMD’s latest 35W tri-core mobile CPU, the Phenom II X3 N830. Its clock speed ranges between 1.8 to 2.1GHz depending on load, and it sports 512KB L2 cache per core. It is cleverly positioned to fill a perceived gap in Intel’s line-up: that of a mobile processor with more than two physical cores at a relatively ‘budget’ price point. However, we have to wonder whether the extra core and its concomitant power draw are worth it for the average consumer, who is unlikely to run many heavily multi-threaded applications on the laptops the N830 is liable to find itself in. Still, it’s impressive that AMD has added an extra core without raising the wattage from its previous dual-core offerings.

In our PC Mark Vantage runs the Aspire 5551’s N830 was consistently beaten by the previous-generation 2.5GHz, dual-core AMD Turion II Ultra M620 found in the cheaper HP Pavilion dv6-2113sa (logical considering the M620’s higher clock speed), while the Core i5 found in the more expensive Aspire TimelineX 4820TG simply wipes the floor with it. If you run multi-threaded applications that will truly take advantage of the third core then this might be the mobile CPU for you, but for most people’s use the N830 will be outperformed by cheaper dual-core alternatives.


Unfortunately things don’t improve when we get to the graphics. The Mobility Radeon HD 4250, with its miserly 256MB of RAM, is certainly no gaming card – as you can see below.

In fact it’s not that much more impressive than Intel’s integrated graphics efforts, in that it too won’t allow you to play even basic 3D games like TrackMania Nations Forever at decent settings. Still, it does a good job of video acceleration and processing, taking that load off the CPU.


Battery life from the Aspire 5551’s 4,400mAh/48Wh lithium unit is reasonable, and it’s good to see that, in the intensive DVD test at least, this Aspire isn’t suffering from its processor’s extra core.

In fact, in the Productivity test this Aspire held up better than many similar laptops with older dual-core AMD processors, managing a full 3hrs and 21mins. However, raw horsepower is not the only benchmark where the 4820TG’s Core i5 wins the day, as battery life is also significantly better.


This brings us neatly onto our value considerations, where unfortunately the new Aspire 5551 doesn’t hold up too well unless you really need its CPU’s third core. If you can afford an extra £150, the lighter Aspire TimelineX 4820TG is well worth the larger outlay, offering better build quality, battery life and general performance in applications and games. If you’re on a limited budget, the award-winning HP Pavilion dv6-2113sa is a better bet at just £540, with its lesser battery life offset by more connectivity and features (including ExpressCard, Firewire and Bluetooth), a larger hard drive and better performance. If battery life is a prime consideration, Dell offers an Inspiron with a Core i3 CPU and Radeon HD 5450 graphics with Bluetooth for £550, while upping this to £630 will get you a Core i5-based Studio 15 with a Radeon HD 5470 and larger 500GB hard drive.


While the new N830 Phenom II X3 mobile processor doesn’t use more power than previous dual-core AMD chips, its performance isn’t stellar unless you really need more than two cores. Lacking any other distinguishing features, this version of the Acer Aspire 5551 thus feels like a cheaper laptop than it actually is and, until its price comes down, there are many more attractive options readily available – even from Acer itself.