Last year, we looked at both 26in and 32in LCD TVs from Acer, but this is the first Acer LCD monitor to appear in our labs since this 19in monitor. The AL2416WS has a diagonal viewing area of 24in making it one of the big boys in the monitor arena, competing in particular with the Dell 24in panel, though that in itself has now been put in the shade by Dells’ 30in screen. But with a native resolution of 1,920 x 1,200 there are still plenty of pixels to be getting excited about on this screen. Dell’s 24in screen impressed us when we looked at it, and it’s available at a competitive price, especially from www.overclockers.co.uk, who consistently undercut the price on Dell’s own web site, which tends to go up and down like a yoyo. Acer has a track record in producing performance screens that beat the competition on price: can it do the same again here? 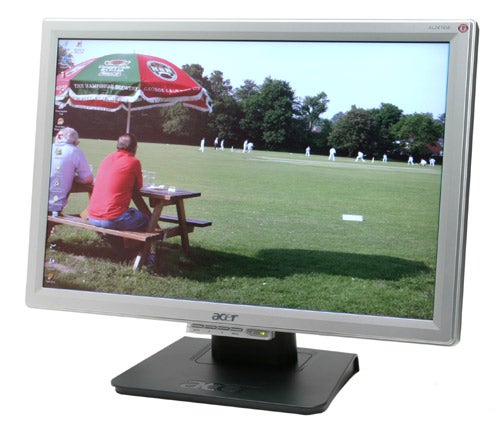 Design wise the Acer is to be honest, something of a disappointment. The screen is surrounded by a silver bezel, and underneath the Acer logo is a small panel for the power button and controls for the (OSD). It sits on a stand, also embossed with the Acer logo. Whereas the Acer LCD TVs managed to look quite modern, the overall look here is quite dated. The screen is equipped with VESA mounting slots, should you wish to place it on the wall. 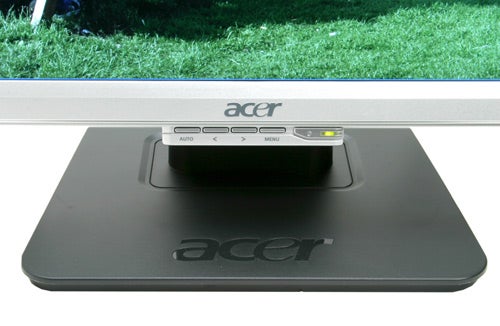 In terms of fine adjustments the OSD enables you to play with the contrast and brightness, the focus and pixel clock, as well as the horizontal and vertical position.


Feature wise, the Acer is very limited, especially compared to the Dell. The panel can be tilted back very slightly and several degrees forward on its stand. However, there’s no height adjustment at all. The Dell on the other hand had both height adjustment and can be pivoted into portrait mode too. 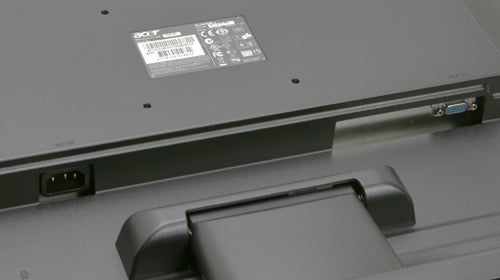 The biggest surprise though was the connectivity or lack of it. The Acer has a single VGA, D-Sub connector – and that’s it. For a monitor that’s capable of 1,920 x 1,200 the lack of DVI is something of a shock, especially as you’d want to maximise quality at this relatively high resolution. Again this compares very poorly with the Dell, which sports, D-Sub, DVI (HDCP compliant), composite, S-Video, and Component. The Dell even shows off with side-mounted card reader slots.

But what about screen performance? After taking the Acer out of the box and just plugging it in, I was immediately struck by the lack of vividness is the image. It just seemed dull. However, if you move round the OSD, you can select between Warm, Cool and User settings. Cool gives everything a blue tinge, and Warm was what the panel was set to. The User setting enables you to adjust the RGB levels and put some much needed vividness back into the image.


Out first run of DisplayMate highlighted a shortcoming of the D-Sub connection, with clearly visible variations in the Pixel tracking test. However, one press on the Auto Config button sorted this out. However, a few minutes later and it was off again, requiring another Auto Config press. Running through the rest of the tests, the screen was pretty impressive, with strong colours and good levels of progression though the greyscale and colour tests. There’s was some drop off towards the end of the scale, but it wasn’t too bad at all.


Viewing angle was also very impressive, with no major shift in colours or brightness even right at the sides. There was some when standing up, but that’s where the tilting comes in.


What gamers might be tempted by is the response time, which Acer quotes as being 6ms from grey to grey. Playing games in the screen and for video I had no issues with fast motion. The contrast ratio is given as 1000:1, which is very high for an LCD. These figures don’t mean that much as there isn’t a fixed standard for contrast ratios but there’s no doubting that this was another strong point of the display.


Overall then, image quality is more than acceptable, but it does lack the colour vividness and sharpness of the Dell or of other smaller screens. 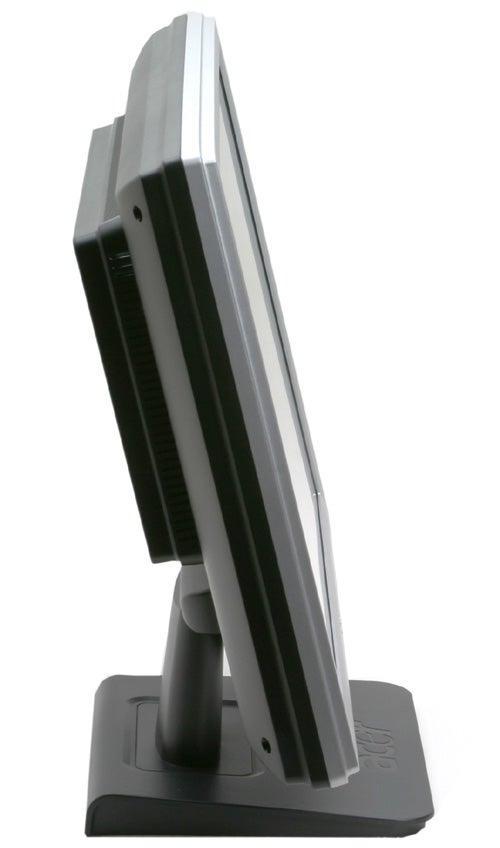 In typical Acer fashion this display is available for a record breaking price. The SRP is £700 but this has been heavily discounted by retailers and you can get it for around £630. However, a couple are doing it for around £580 – a truly astonishing price for a monitor this size. The price that Dell offers its screen for tends to yo-yo but it was £881 at the time of writing. However, Overclockers.co.uk is selling it for £681, about £100 more than the Acer. However, if I was forking out this much for a monitor, I’d be willing to spend extra on the Dell, at least at the Overclockers price. With so many more features, it just makes more sense.


Acer is to be congratulated for making a 1,920 x 1,200 screen available at such a low price but it could do with a makeover and a DVI connection at the very least, to compete with the Dell.


A decent performing panel with a fantastic size and resolution for the price. However, its paucity of features, in particular the absence of a DVI slot, makes Dell’s 24in a much more attractive proposition.


N.B. A reader has emailed in to say that there is a version in the US that features a DVI socket and he has one. That along would add a point to the overall score. But this one doesn’t. Shame.