In the world of networking 3Com has always been a follower rather than a leader and so it is with wireless as only after all the furore has died down over the past 18 months does it step into the 802.11n arena. It does so with a complete family of Draft 2.0 compliant products with the ADSL Wireless 11n Wireless Router (3CRWDR300A-73) providing precisely those features intimated by its lengthy moniker.


3Com has been a little more adventurous in the design department as the boring white slabs from its older OfficeConnect range have been replaced with shiny grey units with plenty of bright blue status LEDs and even a backlit logo on the top cover. It offers a standard four-port Fast Ethernet switch along with integral ADSL2/2+ modem and teams these up with an 802.11n wireless access point. 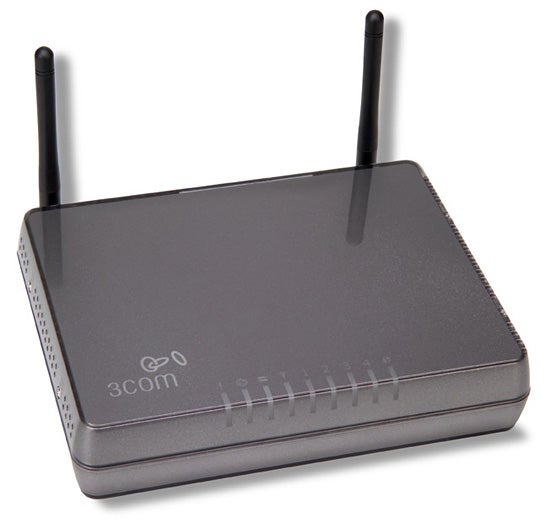 3Com reckons the router can be up and running in as little as 15 minutes and we can agree with this as you simply point a browser at its default IP address and follow a quick start wizard. You can secure administrative access and set up wireless encryption during this phase and if you have problems finding the router on the network 3Com also provides a handy little finder utility which will locate it for you.


The router’s web interface provides easy access to a reasonable if somewhat uninspiring range of features. There are plenty of wireless security options as you have WEP and WPA/WPA2 encryption. Authentication via an external RADIUS server is possible, the SSID can be masked, and you can implement a MAC address filter list. 3Com’s WMM (wireless multimedia mode) feature could prove useful as it automatically prioritises four traffic categories including voice and video. 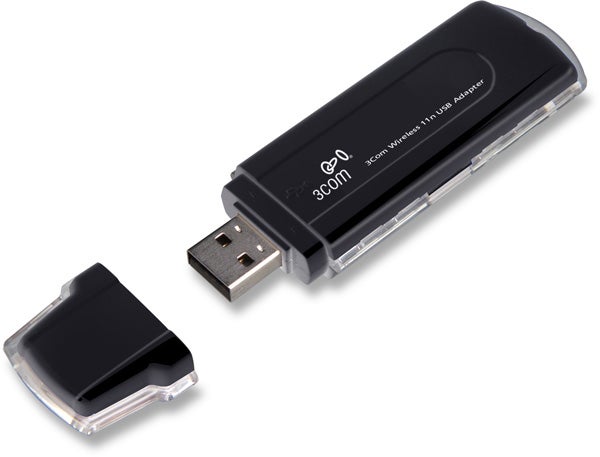 Support for WDS (wireless distribution system) means the router can act as a repeater to other compliant wireless routers for extending range. WPS (Wi-Fi Protected Setup) using push button or PIN methods is also available and you can use a wizard to set this up or configure it manually. 3Com’s new client devices support this although for its 802.11n USB adapter we needed to download the latest driver version, which also adds a new connection utility for Vista users. It’s one of the nicest interfaces we’ve seen for while and we found that the WPS using the PBC (Push Button Configuration) mode worked perfectly.


Pressing the WPS button at the back of the router causes an LED on the front to flash and during this phase you select the PBS option on the client utility. There’s nothing else to do as an encrypted connection is automatically negotiated between router and client. If you wish, you can use the PIN method instead as both are available. It’s worth noting that the new client utility also supports 3Com’s WMM.

As expected, wireless performance in the real world is nowhere near the claimed top speed of 300Mbps. We installed the USB adapter in a Boston Supermicro 3GHz Xeon 5160 system running Vista Ultimate and copied a 690MB video clip to a system on the LAN over a close range WPA2 encrypted link. This took 113 seconds for an average of 49Mbps and increasing the distance between client and router to eleven metres in the lab saw no appreciable difference in speed.


The router’s firewall offers three levels of protection although we can’t see much point in the low and medium levels as SPI is switched off in both of these. Both SPI and DoS (Denial of Service) protection are enabled on the high setting and you can then muck about with connection policies and levels of DoS protection. If the firewall does detect any dubious activity, you can have it alert you via email. 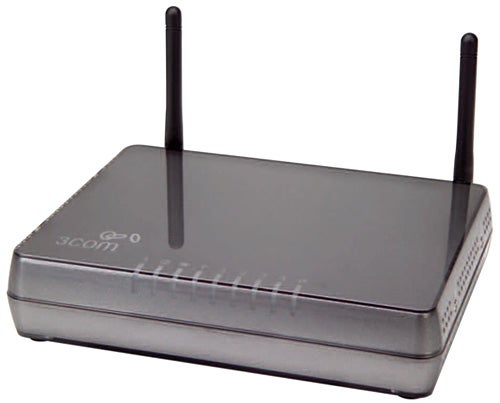 Up to thirty virtual servers can be used to route inbound traffic to specific systems on the LAN although no inbound rules can be assigned to them so you can’t route traffic from a specific external IP address or range to an internal system. DMZ options are above average as instead of allowing one LAN system to sidestep the firewall 3Com lets you do it with up to eight. You also have up to 20 entries for port forwarding rules and each one can contain a single port number or range.


The PC Privileges feature allows you to determine Internet access permissions for LAN systems. You can block or allow access to services such as sending or receiving email, web browsing and FTP and use schedules to determine when they are active. URL filtering is on the menu although this isn’t anything special as all you can do is create up to thirty URL keyword entries and block or allow access. Of more value to businesses is the router’s IPsec VPN termination capabilities allowing up to five secure site-to-site tunnels to be created.


3Com’s entry into 11n wireless networks hasn’t been particularly spectacular as this home and small business router is average in nearly every aspect. Wireless performance and general level of features aren’t any better than most of the competition although the IPsec VPN support is unexpected at this price. 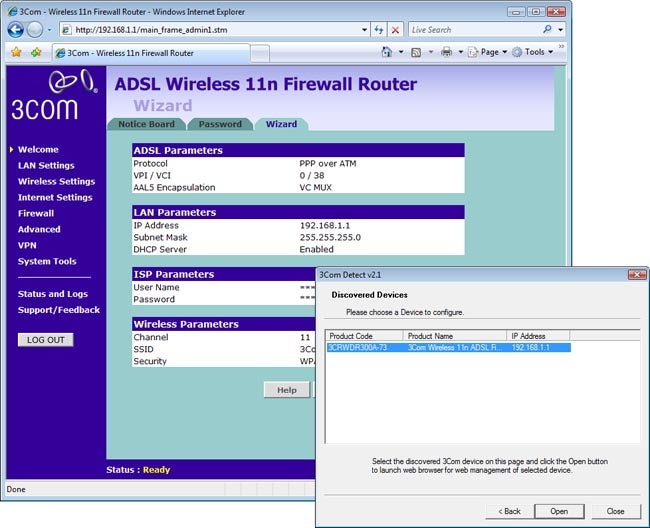 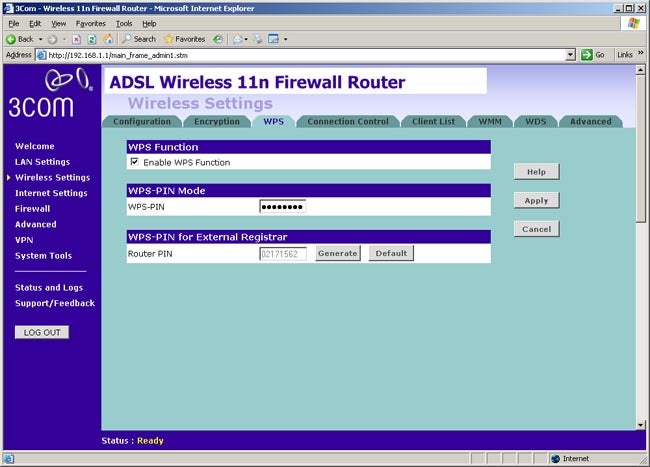 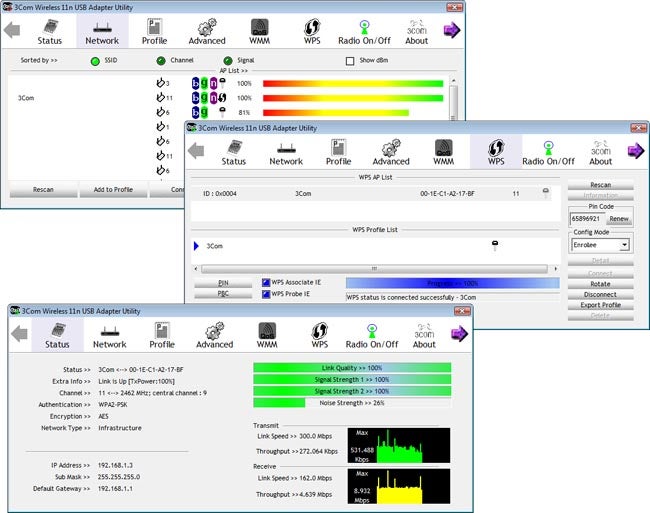 (centre)”’The new USB adapter offers a slick client utility with support for both WPS and WMM.”’(/centre) 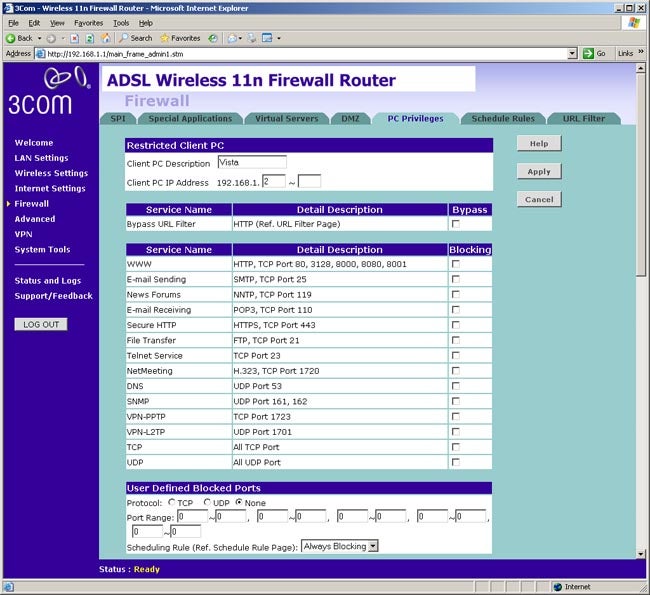 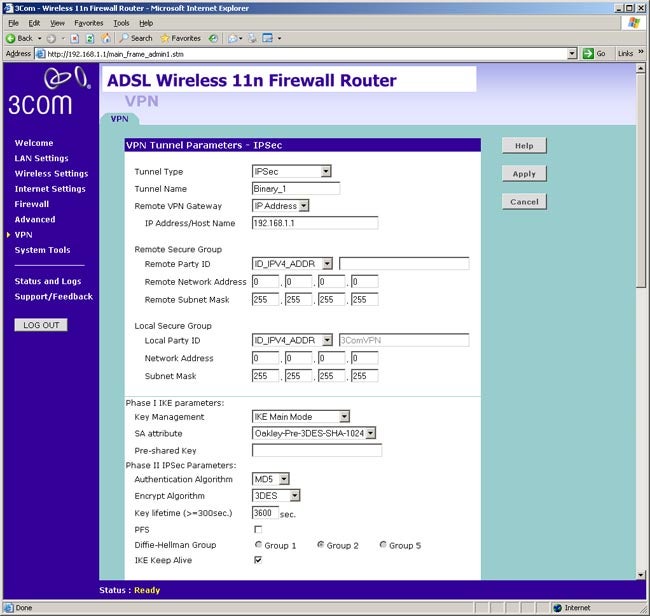