It is almost time for the next generation of gaming. At some point between now and Christmas, Sony and Microsoft will unleash their new games consoles on the world. The PlayStation 4 and the Xbox One are coming to shake up our ideas of what a console can do and usher in a new era of gaming.


Are We Already Next-gen?

Or perhaps not. The next generation of gaming actually started in November last year with the launch of the Wii U and has so far failed to set much of the world alight. That may be an unfair comparison, you may think. After all, While the Wii U was nominally part of the ‘next generation’ it is underpowered compared to the PS4 and (almost certainly) the new Xbox, both of which will be the REAL next-gen games machines.

The Wii U is a next generation console in terms of its predecessor, however and it does offer a number of innovative features that mark it out as a step forward. The PS4 (and what we know of the Xbox) by contrast is more like an souped-up version of the PS3. It adds a few cool ideas and impressive hardware but really, it is just a somewhat faster and better version of what has come before.

The current generation of consoles has been with us for around eight years. Eight years is a long time in consumer electronics but all three main consoles are still going relatively strong and new games are being published for them even as I type. The Nintendo Wii may have slipped in gamer’s affections to a degree but the PS3 and Xbox 360 are still selling and both are still host to cutting edge games. They are still relevant to gamers.

The next-gen of consoles is going to be relevant for a much shorter time, however. The reason for this is to do with the console life cycle and that of rival devices in the mobile and tablet sectors.

The console life cycle is pretty well defined now. A console is launched with a handful of games. Some of these have been developed in close collaboration with the console manufacturer and are designed to show off the new features of the console. Typically, most of these games will be a bit underwhelming with perhaps one or two standouts.

As developers learn their way around the new console they are able to squeeze more performance from it than they were capable of using the initial programming documentation and libraries. This process usually continues until the console’s End Of Life. Compare the games released at the Xbox 360 and PS3 at launch with those on sale now and you can see how much more developers have been able to coerce from the hardware.

During that past eight years however, something else has come along that has shifted perceptions of how quickly a product can mature and be replaced – mobile. The launch of the original iPhone in 2007 ushered in a new era for smartphone technology. Smartphones existed before the iPhone, but Apple’s baby was so advanced in some respects compared to even the best that Nokia or RIM had to offer that it was difficult to even class it as the same kind of device.

We aren’t just talking about phones here, of course. In consumers eyes, the iPad went quickly from an easily-mocked ‘giant iPhone’ to a warmly-embraced addition to many homes, spawning hundreds of imitators and carving out an entirely new niche.
angry birds

Compared to the console world, mobile development is nimble and rapid. People expect to be able to replace their handsets after their contract expires. Every eighteen months to two years we are used to being able to retire our badly scratched mobile and replace it with something not just shiny and new but markedly better. Manufacturers have been adding features and capabilities to new phones at an astonishing rate.

Nobody could have predicted how quickly we went from “Oh, look, a fancy new kind of phone” to “Oh, look, an entirely new category of personal computing device” (ok, maybe Steve Jobs did, but I don’t think it is unreasonable to say that even he found the rapid change a surprise) but what is just as surprising is the effect that this change has had on gaming.

The Nintendo Wii launched with a new kind of motion sensing controller, an idea that found its way into the PS3’s Sixaxis gamepad and greatly influenced the Xbox Kinect and PlayStation Move. Motion control has led to some innovative games but none of the aforementioned controllers has had as great an effect on the way we play as has multi-touch on mobile and tablets.

More than that, the App Store model has given rise to an army of small developers who would find it difficult or downright impossible to find their footing in the console world, where the huge expense of developing and publishing a game is prohibitive for most indies.

Mobiles and tablets are also – obviously – extremely portable. Lack of storage has led manufacturers and developers to embrace the cloud and the fact that almost all of these devices have either 3G/4G, Wi-Fi – or both – means that both internet access and easy cloud storage can just happen. 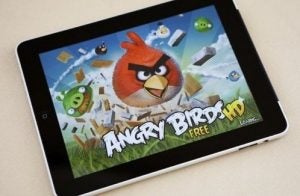 These elements combined – a constant churn of new devices, a legion of developers, zero-effort internet and touch – make tablets and smartphones incredibly versatile games machines. The next generation of consoles has learned from mobile and all lean heavily on the cloud with wireless or ethernet built in as well as an increasing nod towards social media. But all are entering the market with expensive boxes that gamers will be reluctant to replace quickly.

Phones may be expensive, but the way we approach replacing them is completely different to the way we view buying consoles.

One of the reasons that consoles remain fixed throughout their life cycle is price – at least at first, these can be expensive toys – but it is also so that developers don’t have to hit a moving target. Console games are expensive to develop and publish and trying to factor in multiple versions of the Xbox or whatever would be impractical. By contrast, mobile games are currently much cheaper to develop – due in part to the App Store-style model – and there are so many devices out there that losing backwards compatibility isn’t such a big issue. In any case, most people upgrade after a couple of years and the problem goes away.

People will always want to sit in a room together to play games and it would be silly to think that gamers will only ever want to squint at a screen in the palm of their hand. It would be equally silly, though, to expect that Apple, Google, Samsung and the rest won’t simply make it easier to play their kind of games on a big screen. For example – Google’s announcement last week of Google Play Games lends itself really well to cross-platform gaming. Not just on multiple phones or tablets but PCs, browsers and even lightweight consoles like the Ouya.

The next generation consoles may be extremely powerful by today’s standards and we will undoubtedly see some great games appearing on all three (or ‘both’ if you want to be mean to Nintendo.) However, next year’s phone and tablet launches are going to be more powerful again and by the time the ‘next generation’ lumbers towards its own End Of Life the pace of change will mean that their handheld rivals will have left them in the dust.

Xbox One vs PS4