The Start Menu is coming back with Windows 10. Here’s what you’re going to be able to do with it

Windows has had a bit of a rough time over the past, ooh, eight years. Vista nixed a lot of the OS’s goodwill, and after recovering with Windows 7, Windows 8 has done little to stop reams of traditional Windows users flocking to Mac OS X.

That’s what Windows 10 is here to stop. It’s going to unite the software worlds of laptops, tablets and phones into a blissful computer-y utopia. In theory anyway.

We don’t blame you for being nervous. But there’s one good sign: the Start Menu is back from day one. Killing it for Windows 8 was one of the current OS’s most controversial changes. But it’s returning as a core part of the Windows 10 experience. 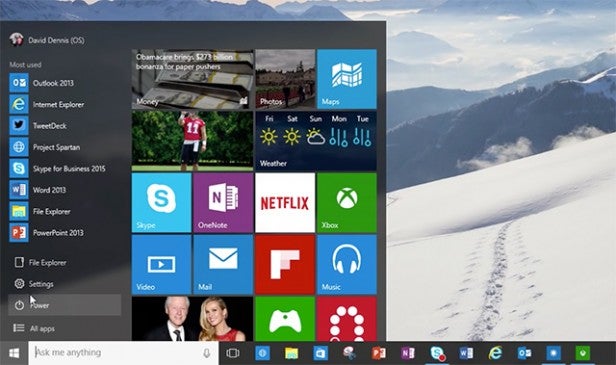 The Start Menu has gone through an awful lot of design tweaks and changes since the first Windows 10 developer previews started in 2014. However, the final version uses a few standard, immovable entries that really help give it some of the flavour of Start menus of old.

These sit down by the bottom, where they should be. And give you access to the File Explorer, Settings and Power menu.

While these won’t be essential for tablets, they are very important for laptops and desktops. Not having easy access to these features pre-software-customisation would be a forehead-clutching misstep.

Other bits on the left side are your ‘most used’ apps

Above these anchored-in bits, you’ll find the apps you used most recently. We presume the idea is that this lets the Start menu seem customised/tailored without requiring any effort on your end.

Let’s not forget: Windows isn’t really as much of an enthusiast-led OS as it used to be. Powering so many mobile devices (as in tablets: this part of the UI won’t apply to phones), some level of dumbing-down is seen as necessary, it seems.

Your customisation on this part of the Start menu is comprised of telling Windows 10 apps you don’t want to appear on the most-used list. Perhaps there’s something not entirely family-friendly you want to leave off there, or just something you never launch from the Start menu.

You can add Live Tiles to the side

The part you can customise much more readily is the bit to the right. Live Tiles live here, giving the Start Menu some of that Windows/Windows Phone 8 flavour.

You pin your favourites in this part, more-or-less mirroring what you might end up with when using a Windows phone. 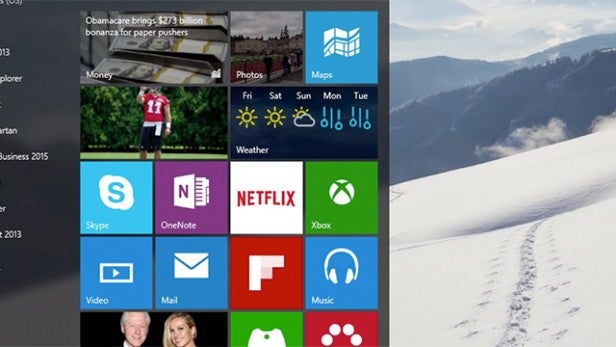 Not too familiar with these tiles? For the most part they simply act as shortcuts for apps, but there are also smarter ones (hence the ‘Live’) that offer snippets of information that changes on a regular basis.

In these screenshots you can see three of the main uses for these more involved kinds of tiles: weather, photos and news-style feeds. Of course, if you didn’t skip Windows 8 these will be nothing new.

It’s only their positioning that has changed, not their design.

This Live Tile area is also the side of the Start Menu that can be altered. You can give it more room, in order to fit in more tiles.

Live Tiles come in different sizes, too, exactly as they do currently: generally small, medium and large. And you’ll even be able to make tiles of websites, not just apps.

A tile-led approach is part of what’s going to let tablets and laptops bleed together all the more. And, consistent with the mobile side of Windows 8.1, you can alter the colour scheme of the Start Menu too.

Microsoft calls these colour accents, and you can pick from a reasonably comprehensive array of shades, although not the full RGB spectrum.

With control over what are likely to feel like surface-level parts of the Start Menu rather than its core, those hoping for something close to what we had back in the earlier days of Windows may be disappointed.

It is unlikely to replace the icon dock at the bottom of the screen in functionality terms for all of you, and even the use of a ‘Settings’ rather than ‘Control Panel’ shortcut is suggestive of a clear focus on tablet, rather than desktop/laptop, use.

Cortana lives down the bottom now

One of the potentially more interesting elements of the Start Menu is Cortana integration. Predictably enough, this digital assistant takes over the search bar. 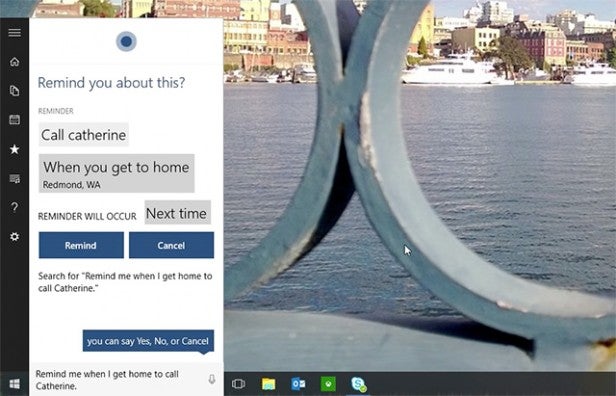 We’re glad to see the interaction is primarily text-based, although you can also talk to Cortana if you must. As you can see, there’s a microphone icon to the right side of the search bar.

This is where we start to get interested in desktop/phone Windows integration. Setting a quick alarm reminder before your leave the office that’ll pipe up on your phone come 8:30pm? That could be useful.

What’s the Windows 10 Start Menu really about then?

If you were hoping for a return to a more desktop-focused Windows 7-like approach with the Windows 10 Start Menu, you’re likely to be a little disappointed.

The suitably cringy term that sums up its aims is “to promote synergy”. What it allows is a sense of parity with the mobile side of Windows 10 eve from the desktop view of Windows 10.

Microsoft’s ideal scenario is likely that we all use similar Live Tiles on our Windows Phones as we have on our home screens, thereby providing a consistency of experience across all our digital devices. It’s a nice idea. However, it is likely to lead to the parts of Windows optimised for use with a keyboard and mouse feeling further neglected. And automatic ‘tailoring’ of parts other than those that are likely to feel ‘made for touchscreens’ are sure to raise a few eyebrows among Windows veterans.

But we’ll wait to see what your reaction is come the full Windows 10 release on 29 July.