The question of whether to buy Microsoft or Sony for your home games console has never been as important. Not only are the Xbox One and PS4 launching at roughly the same time – a first in the history of these series – they are also to sell at a similar price.

There’s no easy way out this time.

However, looking at the core specs of these systems, it looks like the Sony PlayStation 4 will be a significantly more powerful gaming system.

Getting the Magnifying Lens Out
A cursory look at the specs of the Sony PS4 and Xbox One suggests they’ll offer similar performance. Both have eight-core processors. Both CPUs are made by AMD. A tech layman might even assume they have identical innards.

Some of the inner workings of the consoles’ hardware isn’t yet known, but the most important difference we do know is not in CPU cores, but RAM – the couriers of the computer world.

They sound similar, but the different ways they operate has significant knock-on effects for the gaming potential of the two consoles.

The ‘G’ of the PS4’s GGDR5 RAM stands for ‘graphics’, and this is a type of memory commonly used in dedicated PC graphics cards – although some do use DDR3 instead, usually cheaper models. In a shamelessly generalising sense, DDR3 is used for main system memory and GDDR5 for graphics-based tasks.

The key is bandwidth. GDDR5 sacrifices latency – the speed with which memory tasks can be initiated – for bandwidth, which defines the speed at which tasks can be performed once started.

Estimates put the PS4’s memory bandwidth at 176GB/second, compared to 68GB/second for the Xbox One. The PS4 is the tech outlier here. GDDR5 is only currently available in 512MB chips, so the console will need a whopping 16 of them.

It’s no wonder Sony hasn’t unveiled the PS4’s case yet – maybe it’s even bigger than the Xbox’s.

Memory bandwidth is imperative when shifting great big chunks of data, such as rendering high-quality textures. So is the Xbox One stuffed?

It’s not quite that simple. Microsoft has also implemented an eSRAM buffer that mitigates the relatively low-bandwidth of DDR3. There’s just a tiny amount of this memory in the Xbox One, 32MB, but it can operate in parallel with the main DDR3 memory and is extremely fast.

This will act as a frame buffer. However, whether this memory configuration will be able to offer the same performance as the PS4’s remains to be seem. If it doesn’t, greater texture pop-in or lower texture quality within games are two obvious sacrifices. And the figures suggest the PS4 will maintain the upper hand.

Find out what the TrustedReviews team think of the Xbox One 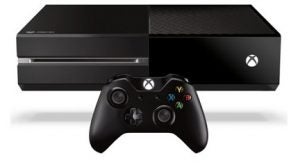 The Xbox One is 10% larger than the Xbox 360. Could the more powerful PS4 be even larger?

That’s Not All, Either…
The Xbox One’s problems don’t end with memory. Although both consoles feature AMD-made GPUs, the PS4’s is significantly more powerful.

A tear-down from Wired magazine reveals that the Sony PS4’s GPU has 50 per cent more shader cores than the Xbox One – 1,152 against 768. And, further descending into the details, their TFLOP ratings, which measure how many operations a second they can perform, are far removed from each other.

The PS4 is rated at 1.8TFLOPs, the Xbox One just 1.23TFLOPs. However, this rating in particular has tended to bear little relation to actual results – the PS3 was widely reported as being a 1.8TFLOP system at its launch. And the PS3 is nowhere near as powerful as the PS4.

That said, the PS3 is spec-for-spec significantly more powerful than the Xbox 360 – and yet its games are not notably better-looking across the board. Is this just history repeating itself?

The game is completely different this time around, because Sony has sensibly abandoned the Cell system architecture used in the PS3. The Cell architecture of the PS3 was notoriously difficult to code for, compared to the more familiar PowerPC-based Xbox, thereby piddling away much of the console’s technological superiority.

This time, the new systems from Microsoft and Sony share the x86 architecture, as seen in Windows-powered laptops and desktops across the world.

There’s no getting around it – the Sony PS4 is more powerful than the Xbox One. And as much as we may try to look for technical ways Microsoft may have slyly bridged the gap, they just aren’t there – yet.

Is Microsoft relying on the notion that developers simply won’t be willing to pile that much money into improving visuals for the technically superior PS4 in cross-platform games?

Or is Sony’s obsession with winning the tech war of gaming going to mean it won’t be able to turn a profit on its new console for years, if ever?

There are many questions like this left hanging, and perhaps they’ll be answered at this year’s E3 conference, where we’ll learn more about both the Xbox One and PS4. But would better graphics in the PS4 be enough to sway you into buying a PlayStation?

Next, read our blow-by-blow Xbox One vs PS4 comparison