Uber vs the Cabbies

Drivers of black cabs are not happy. On 11 June, 10,000 of them are protesting by driving slowly around the Trafalgar Square area of London, causing congestion whose potential cost has been estimated at £125 million.

It’s all because of Uber, a cab app for iPhones and Android mobiles. But why has it gotten everyone so angry? 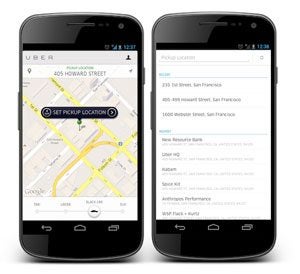 First, a little primer on Uber. It’s an app that lets you virtually hail a taxi. You can do so from a location other than where you’ll meet the driver too, making it perfect for getting a cab from a restaurant as you’re getting the bill, or from a friend’s house.

No awkward phone calls, no flailing of arms. And you can even see where your driver is in the app as you’re waiting.

There are already 3000 Uber drivers in London, and it has proved a smash hit elsewhere too. It started in California, and as of April 2014 was available in 100 cities across the world.

It’s a neat idea, and one we’ve seen in slightly different forms before. In the UK, Kabbee is one of the better known ones.

Why has Uber caused a strike?

If it isn’t the first cab app in London, why is Uber causing so much of a fuss? It’s about how the app operates.

Where other cab apps give you a fare quote before you take the cab, letting you know how much you’ll have to pay, Uber only gives you a rough estimate. The final fee is determined on the time taken and the distance – the app can (mostly) accurately estimate one, but not the other.

The London cab drivers’ argument is that this constitutes a taximeter, which is the idea behind the device that you see in black cabs – the thing that ups your fare, seemingly every second or two at 2am. So what’s the issue?

By law only black cabs are allowed to use these meters in London. This is something that is meant to be enforced by Transport for London, but TfL claims the Uber mechanism does not constitute a taximeter. The cabbies disagree – and we have our impasse.

TfL’s argument is that because the app does not require a physical connection between the device and the car, it doesn’t count. The Licensed Taxi Drivers Association might argue it’s a minor point of semantics.

On 4 June, TfL asked for a high court ruling on the matter, to settle the issue once and for all. To further inflame the situation, the LTDA (the cabbies’ association) claims Uber is dodging UK taxes in the way it operates, something that is sure to cause additional interest in the newspapers in coming days.

What do you think? Is this a lot of fuss over nothing or is Uber doing over a London institution while TfL shrugs its shoulders?

Next, read our feature on apps to save you from a transport strike