We all know there are limitations to VR. So does Nvidia’s CEO, apparently. We have limited resolution, limited graphical power and we have to remain tethered to our PCs, which can result in jarring moments of untangling if you’ve spun around too far.

Zotac, MSI and HP are all looking to solve this issue simultaneously, with their own backpack PCs. Both MSI and Zotac have been demonstrating their solutions at Computex, and I was able to have a go with Zotac’s device.

While the obligation to stand on an elevated stage in the middle of the Nangang Exhibition Center in Taipei was certainly a turn-off, the actual experience was very good.

Zotac’s sub-5kg “VR Backpack” solution isn’t in any way what you’d call the finished article. In fact, I doubt many more versions of the VR Backpack exist outside of Computex. It’s really just a compact PC shoved into a canvas bag with numerous cables sticking out of it and a battery in the bottom.

Specification-wise, it matches the Zotac Magnus compact PC (Intel Core i5-6400, Nvidia GeForce GTX 980), although for the backpack model Zotac has ditched the liquid-cooling in favour of air-cooling, a decision it says is down to weight. I’d imagine it’s down to potential leakage issues, too.

The bag itself is a normal backpack with a mesh lid, and it’s reasonably comfortable to wear.

MSI’s Backpack PC looks far closer to completion – the bag is more of a hard shell and the components look like they’re fairly stable within the bag. MSI says the bag can be laid down on a desk – flat, like a regular PC – so you only have to pick it up when you fancy some VR action. 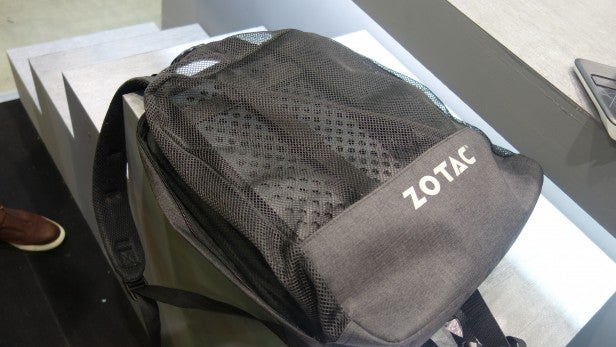 Battery life on the Zotac backpack is said to be up to two hours; the company says it plans to install a second, smaller battery so gamers can easily swap out the main battery without having to turn off the PC. It all sounds very ambitious, especially when you consider Zotac wants to get this machine to the market before the end of the year.

The backpack VR is best used with the HTC Vive, since it’s the best VR experience for physically moving around a room. Playing a game of zombie shooter Arizona Sunshine, I felt free to spin around as much as the game called for – although the same limitations of space apply, so you won’t be wandering around your house with a Vive on your head just yet.

It’s actually quite hard to get used to the freedom that such semi-tetherless offers, but that’s no bad thing. The only awkward moment comes when you have to remove the kit – when you remove the headset, where do you put it without straining the cable while also taking off the backpack? Problem still to be solved, it seems.

I didn’t notice the PC becoming hot, and the added impracticality of having to wear a bag was outweighed by the genuinely freeing experience offered by the form factor.

It’s all good fun, but backpack PCs are only ever going to be a niche proposition; the price (unannounced) and limitations of battery life will be enough to put most off.

Are you tempted by a backpack PC for VR? Let us know in the comments below.