Also making an impression were Sony’s new Magnetic Fluid speakers. These replace the usual ‘spider’ mounting system found in speakers with a magnetic fluid that’s able to pull the speaker cone up and down much more smoothly and efficiently, and without, crucially, requiring as much physical depth to the speaker. This has meant that Sony has been able to develop much slimmer, more compact and more stylish speakers for its home cinema systems in 2012 without pushing prices up. This patented technology genuinely feels like an important moment in audio development, and we look forward to implementations of it also finding their way onto thin TVs in the future.

Third on the list of ‘hit’ audio products is Sony’s upcoming new high-end AV receiver, the STR-DA5700Es. This £2,000 beast also incorporates not one but two genuine innovations which both proved dazzlingly impressive during a demonstration session. First, the unit supports a ‘7.1-surround with front height speakers’ set up. This adds two further speakers up high in your room at the front, so that you can get a more convincing ‘wall of sound’ – especially if that screen is a large projection affair. 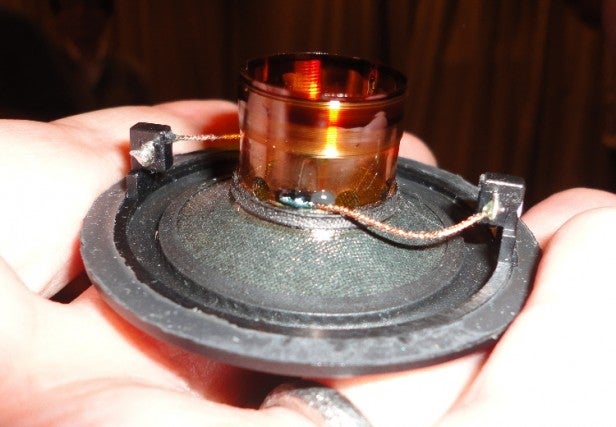 Currently no commercially available films have been mixed on Blu-ray to support the Front High Speaker format. But the technological capability is there, as proven by the demo we were given of a specially mixed (by Sony technicians) version of Salt, where the addition of front high speaker audio information did an amazingly convincing job of adding clarity and dynamism to the film’s front soundstage during the sequence where Angelina Jolie performs an assassination in a cathedral.

Dialogue perhaps sounded a touch lost in the expanded front soundstage mix, but for a very first stab at a new way of presenting movie audio, it really was hugely convincing. So let’s hope Sony can persuade more disc authors to start including mixes of their movies with Front high speaker support. Best not to mention to your other half, though, that you’re considering adding yet more speakers to your home cinema system…

The DA5700ES’s other big new trick was the Sound Quality Optimiser. The basic idea behind this is that it works in real time to increase the soundfield without increasing the volume. A demo involving the ‘creation of the Sandman’ sequence in Spiderman 3 showed clearly how the Sound Quality Optimiser adds a greater sense of bass and much more tangible audio detailing to your perceived sound when listening at low volumes despite the volume level itself never increasing. This is a potentially hugely useful feature given how many of us have to worry about neighbours or other family members when watching films through our home cinema systems.

The final product of our exhaustive – and exhausting! – week with Sony and its engineers was the XA900iP iPod docking station. Due to launch around April, this is a substantial bit of kit with a distinctive elongated, tapered shape that’s able to handle Bluetooth and Airplay, and is equipped with dual passive radiators, Sony’s S-Master digital amplification system, magnetic field speaker units (delivering high sound pressure with less distortion), and control apps for Apple and Android devices. 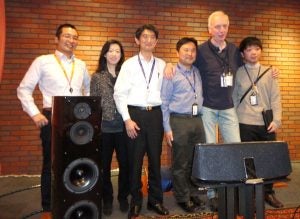 In a show of extreme confidence, Sony demoed the sound quality from the XA900iP in a direct head to head with Geneva’s critically acclaimed Model M. And to be blunt, Sony’s device thrashed its glamorous rival, delivering a sound of much greater dynamic range, clarity and best of all projection, where the sound escaped much further from the confines of the device’s speakers. In fact, its sound appeared during this demo to be the best we’d heard from an iPod dock in its £500 price range.

The trip to Tokyo described over our two features has been the first Sony has set up for many years. But it’s been easy to see why the brand chose now to open its Japanese doors once more to the Western press. For after a year of almost unremittingly bad news, it’s clear that Sony’s new focus on getting back to its quality roots is already starting to deliver some exciting results. As Noriaki Negishi, Sony’s Deputy President, Home Entertainment Business Group, memorably and emphatically put it during our final formal dinner before returning to the UK, ‘The great Sony fight back starts here!’