The iPad OS is simplicity itself and is great for it, but sometimes this
is taken too far. For instance, if you want to switch WiFi networks you
have to close whatever app you’re using, find the homescreen with the
settings app, open the settings, open General > Network > Wi-Fi then go about your changes. On Android Honeycomb you tap the bottom right corner, tap Wi-Fi and away you go. Okay, so it’s one small example but there are many other scenarios like this where you have to
jump through the Apple hoops to do basic tasks, and it’s decidedly
frustrating. 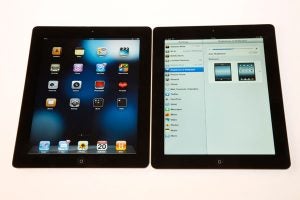 I hate the iPad 3’s lack of proper multi-tasking


This is a bit left-field because no tablet yet does exactly what I
actually want when it comes to multi-tasking. You see, Android offers
proper multi-tasking in so much as when you minimise an app it can carry
on in the background doing everything it was, like you were still
looking at it. In contrast, the iPad pauses its apps when minimised, with
only a few core tasks (like playing music) able to continue. Both have
their advantages with Android able to for instance complete boring slow
tasks while you get on with something else, and the iPad way is good for
battery life. 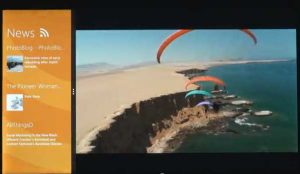 However, what I really want is proper desktop style windows management
where you can literally have two apps open side by side, or have a small
window tucked away next to a big one. In fact, the way Windows 8
manages windows in touchscreen mode looks just perfect.

I hate that iPad 3 doesn’t have Drag and Drop


ITunes is impressive, make no mistake. If you’re a novice user or simply
like everything to be in one place, it’s a cracking piece of software.
But, if you just like to do your own thing, it’s a blinkin’ nightmare.
All I want is to be able to chuck some files onto my tablet, and drag
’em back off, and once they’re on there I want to be able to browse the
files, move them about and – you know – properly manage them.

I hate that iPad 3 gets all the best apps first


The tables are levelling up. Android is slowly catching up with the iPad
for the depth and breadth of apps but invariably iPad still gets the
best ones first. It’s infuriating and it makes me sad. 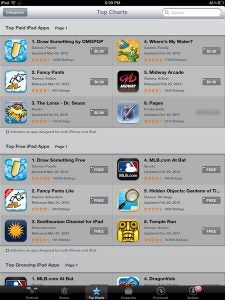 
What is most annoying about the iPad is that I don’t really hate it at
all. I’d love one if I could afford one but it’s precisely all the
reasons mentioned above that mean I can’t really justify buying one.
It’s a frivolity, a toy, a bit of fun. Yes, for some people it may be
more than this, for some it may be their only computing device, but not
me. I need more.


So there you have it. If I were consulted for a redesign of the iPad, those would be my key criteria.


Have I missed anything? Is a mega-camera your biggest priority or is an
even bigger screen your most important to you? Let us know in the
comments.