5 secret features of the Tesla Model S: Inside one of the world’s most amazing cars

The Tesla Model S is the sexiest electric car ever made. It does 0-60mph in 3.1 seconds, goes almost 300 miles before needing a recharge and has an autopilot mode. Elon Musk’s latest electric automotive instalment is the most affordable yet priced in at just less than £60,000 so it’s no longer a pipe dream for those who want to get their hands on one.

But what about the lesser-known features? We took it for a spin to find out.

The Model S is keyless – not only do you not put the key in the ignition, you don’t have to press anything to unlock it. Just approach with the key fob in your pocket, and the handles emerge from the door, presenting themselves. Pure class. Speaking of the key fob, it looks just like a mini Model S. But it doesn’t just look cute, it’s functional too. Double-press the boot, and the one on the real car opens. It’s the same with the bonnet. 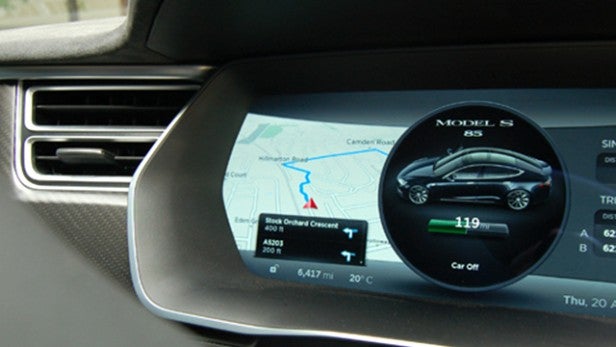 That’s a monster 17-inch touchscreen sitting between the driver and front passenger. And you use it to control pretty much everything. You can set a number of driver profiles – these are basically user profiles, just like on your tablet or Xbox. Position the seat how you like it, tune the radio to your favourite station, set up the screen (map on the top half, radio station on the bottom, for instance), and heat your seat to the desired temperature.

Then after someone else drives it, select your profile and everything will be how you like with no fiddling making adjustments. You can also raise and lower the car as and when. Raise it to go over speedbumps near your house, and it’ll remember and raise itself automatically next time you approach them. And you can set a speed at which to lower the suspension for less wind resistance. Set it to lower at 70mph, and you’ll make the car more efficient during motorway journeys. The screen even controls the sunroof – just drag your finger down to open it and let in the sunshine.

This car isn’t shy of alerting you to potential problems. A battery icon appears on-screen as if you were charging your phone. Be warned: you might get pretty anxious when it starts running low and you’re miles from a supercharger. The satnav routes you via them, so you should be fine, traffic permitting…  It also doesn’t like you speeding. Every time you do, it’ll flash up the speed limit on the dashboard. It appears in place of how much range you’ve got left before the battery dies, which is something you want to keep an eye on, unless you like being stranded. What better way to make sure people obey the speed limit?

Because there’s no engine, and the battery is spread throughout the footprint of the car, the bonnet doubles as more storage space. There’s even room to fit a person. And if you do, there’s a handy escape button inside to stop any practical jokes getting out of hand. They’ve thought of everything. But that’s not the only handy button. The actual boot closes with the press of a button, to save you the chore of pulling it down yourself. In fact, pretty much everything on the car is automatic. The only things you have to close manually are the bonnet, doors and the charging port.

As well as Google Maps on the 17-inch touchscreen, there’s a mini map behind the steering wheel, which is much more convenient for glancing at turn-by-turn directions. It uses GPS as well – the touchscreen uses 3G – so is quicker to catch up if you take a wrong turn. And when the touchscreen is covered in fingerprints? You could wipe it down with your t-shirt, but that’s not very suave. Instead, Tesla bundles a cloth in the glove compartment (which opens using a button, naturally). The screen even has a special cleaning mode that disables all its functions, so you don’t accidentally press anything while cleaning it. To exit it, hold an on-screen button for three seconds. Sometimes the little touches make all the difference.