What is South By Southwest?

The South By Southwest Interactive (SXSWi) festival in Austin, Texas is without doubt the biggest digital culture event of the year anywhere in the world. The Consumer Electronics Show in Las Vegas and CeBIT in Hannover have a more intense focus on gadgets and product releases, but if you want to see what’s really moving the wider digital culture, SXSWi is the place to be.

This is where Twitter came of age in 2007, foursquare was launched at the event in 2008, and Vine reached critical mass at SXSWi 2013, amongst numerous other now household names. With venues all across Austin, SXSWi takes over the entire city, and everyone who attends has a different experience. James Morris shares his.

Snowdon: Encryption is the answer to the NSA’s invasion of privacy

The most significant and well attended set of sessions at SXSWi 2014 revolved around the growing concerns over Internet security. The highlight here was the session where CIA whistleblower Edward Snowden gave his views via Google Hangouts from his exile in Russia, with two members of the American Civil Liberties Union (ACLU) chairing the discussion and providing additional input. 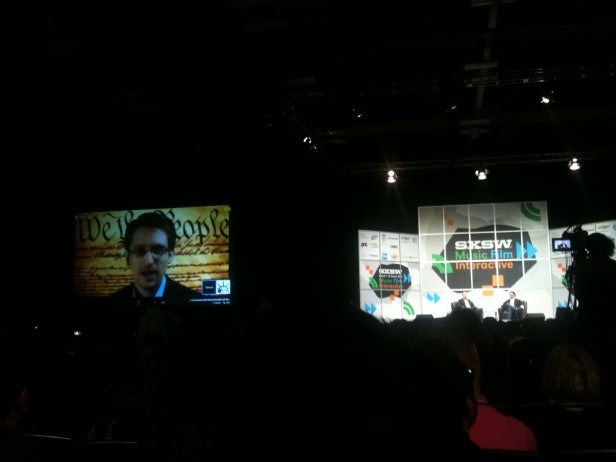 . The general consensus was that they wouldn’t weaken security, though it would have been more enlightening to have a bitter Snowden opponent on stage as well, to present the contrary opinion. Even World Wide Web creator Tim Berners-Lee joined the discussion via Twitter to offer his support.

Both Snowden and the ACLU’s Christopher Soghoian argued that encryption was one of the main answers to the NSA’s invasion of the USA’s – and the world’s – online privacy. Since Snowden’s leaked documents have been published, the backlash has led to all the major Internet companies starting to take security seriously, with Yahoo turning on SSL at long last (Google made it the default in 2010).

Snowden firmly believes he did the right thing by exposing the endemic NSA surveillance, arguing that he was upholding the US Constitution, and that the NSA had rewritten the ‘No search and seizure’ clause to read ‘Any seizure is fine, just don’t search it’ instead. According to Snowden, everyone’s security has been deliberately weakened to enable NSA surveillance, leaving the software we use open to outside cyber-attack from criminals and foreign powers. 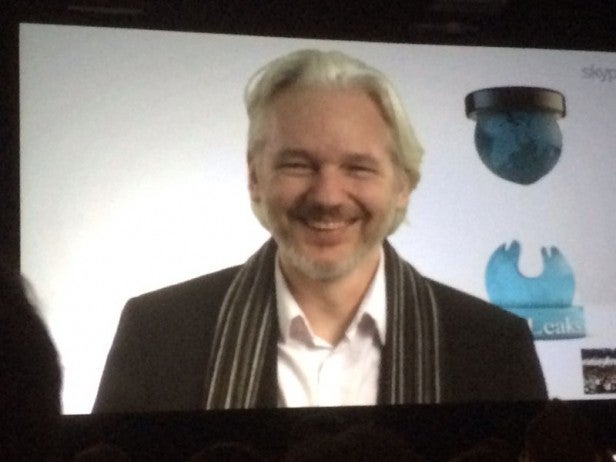 As a warm-up to Snowden’s session, a couple of days earlier Wikileaks founder Julian Assange had also been publicly interviewed under similar circumstances, from his refuge in the Ecuadorian embassy in London, although this time using Skype. Ironically, there were greater technical difficulties on this occasion. Assange talked at a much less technological level, and was also much more of a conspiracy theorist.

, when it was originally meant to be the greatest expression of human freedom. Since the Internet and real life are being inextricably intertwined, this meant that organisations like the NSA were taking control of our lives, and even the super-rich would not be safe if they weren’t part of the ‘Deep State’, which is what Assange calls military and intelligence organisations.

He cited the Obama administration’s inability to prosecute the NSA or CIA for the infractions revealed by Edward Snowden as a case in point that civilians have no control over the Deep State. But he remained bullish in his Ecuadorian safe house about the part he could play to counter this, pledging to continue the release of any documents he could lay his hands on, including those from China and Russia.

If you want to be trendy, pivot 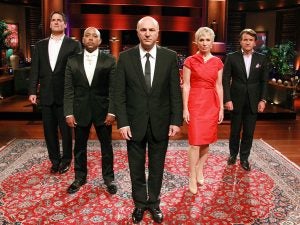 There is always a strong theme of entrepreneurship and start-up business at SXSWi, and both Michael Dell and Mark Cuban were amongst the keynote participants providing advice on the subject. Dell hosted a panel including TripAdvisor co-founder Stephen Kaufer, Shutterfly CEO Jeffrey Housenbold, and Carley Roney, cofounder of The Knot (a wedding website with millions of users a month). The general message appeared to be that you should have the courage to change your strategy if the original one isn’t working – called ‘pivoting’ in the currently trendy language of The Lean Startup.

Mark Cuban is one of the original Internet billionaires, having sold Broadcast.com to Yahoo! for $5.9 billion in 1999. He then promptly bought a Gulfstream V jet online for $40 million, the largest ever e-commerce transaction according the Guinness Book of Records. He is now well-known in the US for his TV role on Shark Tank (he’s on the left in the photo above), the American license of BBC’s Dragon’s Den.

Cuban is a fun guy to listen to, with a down-to-earth everyman manner. His most interesting piece of information was that he wouldn’t put his name to, or invest in, university buildings. This is yet another sign that education is about to go through the same virtualisation revolution that the music, film, TV and publishing industries have all experienced in the last decade.

Coinbase: 2014 the year when Bitcoin comes of age 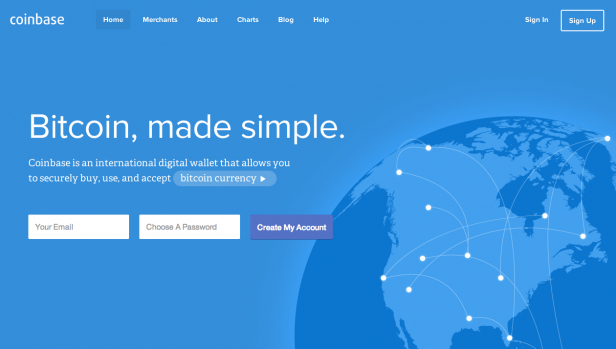 Unsurprisingly, there was more than one session on the
Bitcoin virtual money phenomenon, with the most high-profile being the
Wall Street Journal’s Rolfe Wilker interviewing Fred Ehrsam, the
25-year-old cofounder of Coinbase. With over a million users and 25,000
merchant accounts, Coinbase is one of the biggest players in the Bitcoin
arena, particularly now that major competitors like MtGox have fallen
foul of hacking attacks.

In
a session asking whether Bitcoin was the future of money, Ehrsam
explained that his own company’s technology was a lot more robust than
MtGox’s. He also argued that Bitcoin already had some clear advantages
over regular money for currency exchange and small transactions, as it
had no need for third-party trust organisations like banks. The low
transaction costs would give Bitcoin mainstream vendor appeal, and
Ehrsam expected 2014 to be the year the currency came of age. Coinbase
would be improving its user and merchant experience to speed this
process up. 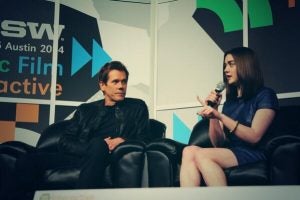 SXSWi isn’t all about serious Internet
issues, though. In fact, we overheard another attendee describing it as a
party with a conference attached rather than the other way around,
which is just about spot on. With film and music SXSW festivals
overlapping the Interactive portion, it’s very much a crossover, and
this also enhances the more cultural focus compared to CES and CeBIT.

Kevin
Bacon was in attendance to celebrate the 20th anniversary of ‘Six
Degrees of Kevin Bacon’, a game where you try to link an actor or
actress to Kevin Bacon via six mutual movies or less. You can now even
use Google to find a Bacon Number. Initially, Kevin Bacon wasn’t very
happy about this game, but he has since grown to enjoy it, and even
turned it into a charity. It’s also a fantastic metaphor for why social media is so
powerful, showing how we’re all connected to each other by just a few
mutual relationships.

3D printing on demand is just a matter of time 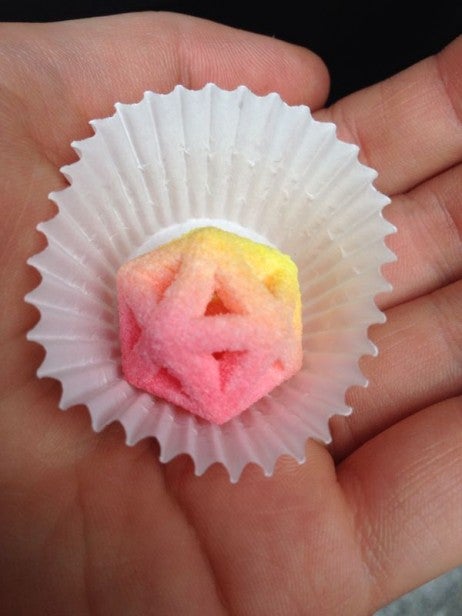 So-called
‘maker culture’ has been a major theme of SXSWi for a few years now, but
this year it has diversified into more esoteric areas, most notably
food. Mondelez International has been experimenting with 3D printing of
its infamous black and white Oreo cookie, with a vending machine that
manufacturers the biscuits on demand according to trends on Twitter.

At
the other end of the scale, Chocolates will custom-print its confectionery in 3D shapes. Deloitte’s
stand was also printing sugary treats in geodesic shapes. They ended up
a bit hard but definitely tasty. The time is fast approaching when
virtually anything will be printable on demand, although it’s not quite
here yet. 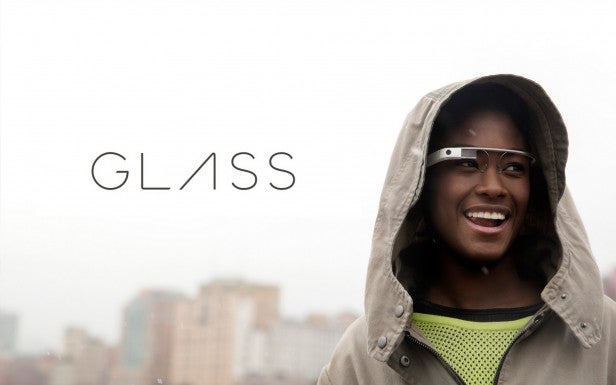 Another major theme of
2014 in general, and huge at CES earlier in the year, is wearable
computing, and there were plenty of sessions on the topic at SXSWi. Even
former basketball legend Shaq got in on the act, although he didn’t
seem to have anything of his own to offer yet. He’s just an avid user.

But whereas Google Glass was only just arriving last year, there were
people wearing it everywhere you looked at SXSWi 2014. Needless to say the audiences of SWSW is far more welcoming to the controversial gadget than other venues.

Strangely,
though, the trade fair attached to SXSWi wasn’t as full of wearables as
you might have expected, given the emphasis at CES and Samsung’s recent unveiling. Clearly the potential of wearables exceeds the reality at present. 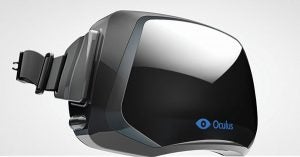 There
was a complete suite devoted to Game of Thrones to promote the imminent
fourth season of the popular HBO series, with props from the series.
But the centrepiece was an experience created with Oscar-winning UK
effects company Framestore using the
Oculus Rift immersive headset. Called ‘Ascend the Wall’, the
experience takes you up the 700-foot Ice Wall in the lift to the top,
where you can view the scene. It was mind-blowing and is yet another reminder that tech like the Oculus Rift has the potential to revolutionise not just games, but to create unique experiences that are worth seeking out.

HBO wasn’t the
only company harnessing Oculus Rift. Creative agency Chaotic Moon had
used it in tandem with the Leap Motion to create a game called Shark
Punch, where you literally punch sharks on the nose to survive as long
as possible. But Chaotic Moon’s biggest news came from the CUPID
hexacopter it had created, which can patrol an area and fire an
80,000-volt taser at intruders. Chaotic Moon
interns to demonstrate, although allegedly there was a queue of staff
wanting to be the one shot. 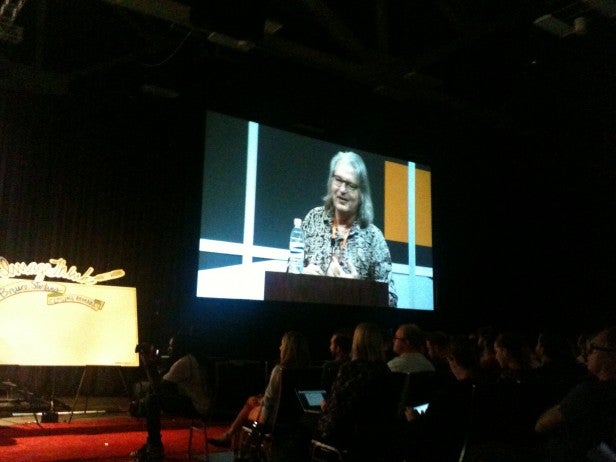 As
is now traditional, SXSWi proceedings ended with sci-fi author Bruce
Sterling summarising the key events. After touching upon the Assange and
Snowden sessions we covered earlier in this article, he listed a few
people who should have been there but weren’t, such as Barrett Brown,
currently serving 70 years in prison for his involvement with the
Anonymous hacker group, and Ross Ulbricht, founder of the infamous Silk
Road website who is facing a similar fate. SXSWi is a huge corporate
event now, but it is still clearly in touch with its underground,
counter-cultural roots.