We’ve finally got our hands on the Sony Xperia 1 II and it’s currently being put through its paces for our full review.

Until that arrives, here are some of the thoughts I have had from my first few days with Sony’s ambitious 2020 flagship.

1. This is the best looking Sony phone to date

Sony might not have gone as wild with the Xperia 1 II design as it did with the PS5, but this is still a really nice phone that is very well built. It’s very tall thanks to the 21:9 display, which might put some off, however the flat sides help it sit comfortably in your hand.

You’ve also got a headphone jack on the top, a very good capacitive fingerprint sensor on the side and a camera shutter button – all features that are missed off most top Android phones these days.

2. The 21:9 display is impressive even if it makes the phone a little hard to hold

Once you get over the slight awkwardness the tall display brings, the actual quality of the screen is excellent – especially if you’re big into watching media on your phone.

This is the only phone that packs a 4K OLED display, with full HDR 10 bit colour support. It also ditches the notch completely for a full screen with no distractions.

While it’s hard to notice the 4K resolution on such a small screen, fire up a compatible video on YouTube and the sharpness makes itself noticeable. This is an excellent display for media and for watching 21:9 content on Netflix. The tall screen does mean you’ll be stretching lots of 16:9 or 18:9 content to fit to avoid black bars, though.

The big missing feature is a fast refresh rate, like the 120Hz seen on the Samsung Galaxy S20 and OnePlus 8 Pro. With the Xperia 1 II the screen refreshes at 60Hz and there are some software tweaks to make certain things seem smoother. This isn’t really a loss for watching video, however you do notice it while gaming.

3. Sony camera veterans will like the new Cinema Pro and Photo Pro apps

Sony has brought some of its Alpha series camera DNA to the Xperia 1 II with the addition of two apps: Cinema Pro and Photo Pro.

Cinema Pro is a video focussed app, while Photo Pro takes normal snaps. Both closely mirror the UI of the Alpha series of cameras and give you quick access to heaps of customisation options and in-depth tweaks. All your options are constantly visible, so you can change resolution and FPS without delving deep into the settings. 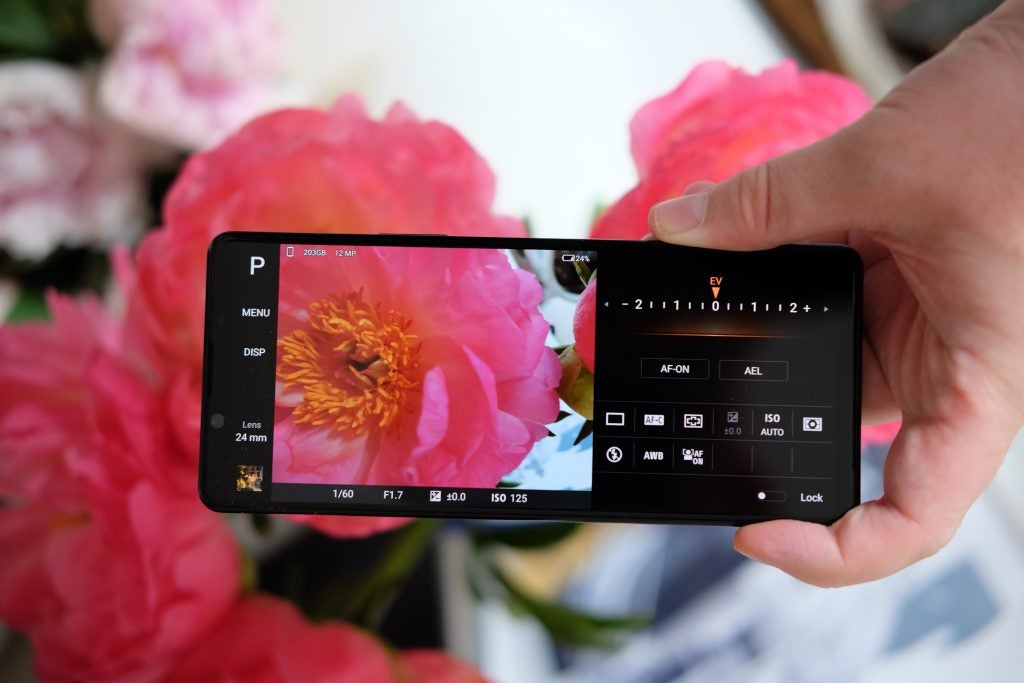 The camera really comes into its own when you’re using these apps. It might not be the best camera on a smartphone when you’re shooting in auto mode, but in the hands of someone who knows what they’re doing it can churn out very good snaps with the Photo Pro app. Other Alpha additions, like eye tracking and eye focusing, also work very well.

I wrote a separate piece on this, but it is worth mentioning again – I am glad Sony went with a physical fingerprint sensor rather than using an in-display option. The sensor is buried inside the power button and I have found it far more responsive than the in-display alternatives.