Samsung has not officially revealed any features of the upcoming phone, but we can already tell plenty about the phone from titbits leaked by insiders who claim to be in the know.

However, once of the elements we know the least about at present is exactly what the Samsung Galaxy S4 will look and feel like. As it’s not something that can be fully encapsulated in a series of specs, the designs of phones tend to be subject to far fewer leaks than their core specs.

Major deviations in the design strategy of the Galaxy series are unlikely, though. Since the first Samsung Galaxy flagship back in 2010, every top dog in the range has used a removable plastic battery cover. Although this choice is what has earned the phones much of the scant criticism they have received, it helps to keep the phones light, slim and less prone to shattering than a glass-rear phone. The Google Nexus 4, for example, uses a glass back.

The South Korean site Enuri suggests that the next Galaxy phone will be a bit chunkier than the Galaxy S3 at 9.1mm thick, and that it may offer the S-Pen seen in the Note 2.

The front of the Samsung Galaxy S4 won’t shy away from glass. It’s likely to use the latest generation of Corning’s toughened glass.

The Samsung Galaxy S3 uses Gorilla Glass II, however, the Galaxy S4 may feature Corning’s latest innovation – flexible toughened glass known as Willow Glass. However, The Verge writes that a flexible-screened Galaxy phone won’t arrive in 2013. And what’s the point of using a flexible screen coating when there’s no flexi tech in the actual screen? Unless Willow Glass is significantly thinner than Gorilla Glass II, there’s not much of a reason to.

Whether or not there’ll be any flexible element to the Samsung Galaxy S4’s display, the phone’s screen will be one of the device’s most-touted features.

Consistent with the trajectory of the series, the Samsung Galaxy S4’s screen will be larger and more pixel-packed than those of its predecessors. 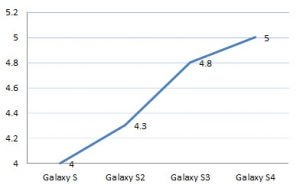 The Samsung Galaxy S4 will feature a 5-inch 1080p Super AMOLED display. It sounds impressive, but this calibre of screen is not without precedent. Several 1080p mobiles have already been unveiled – officially or otherwise – including the ZTE Nubia, Sony Yuga, HTC Butterfly and LG Optimus G2.

What will help to differentiate the Samsung Galaxy S4 from at least some of the competition is its AMOLED panel. This offers greater contrast than the rival IPS variants you’ll see in other top-end phones.

As we saw in our comparison of the HTC One X and Samsung Galaxy S3, though, AMOLED isn’t always better. The colours of IPS type screens generally look more natural, and top brightness is often significantly higher.

Then there is the PenTile problem. PenTile refers to the sub-pixel arrangement of the screens of most AMOLED devices. It’s a Samsung-trademarked technology that splits the green subpixel into two bits. Samsung says it helps to prolong the life of the screen, but it also reduces clarity.

What’s arguably more of a change is that the Galaxy S4 may offer an S-Pen stylus similar to that of the Note 2, according to SamMobile. This is a digitiser stylus that involved a whole new screen layer. The digitiser can sense the stylus’s tip well before it touches the screen, and can also judge varying levels of pressure. 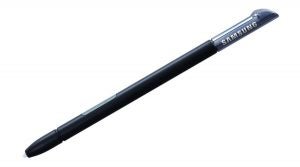 An S-Pen stylus would make the Samsung Galaxy S4 a nifty little sketching tool, but it would also blur the lines between a “Galaxy S” device and a “Galaxy Note” device. Let’s not forget, the original Note screen was only 0.3 inches larger than what we expect from the Galaxy S4.